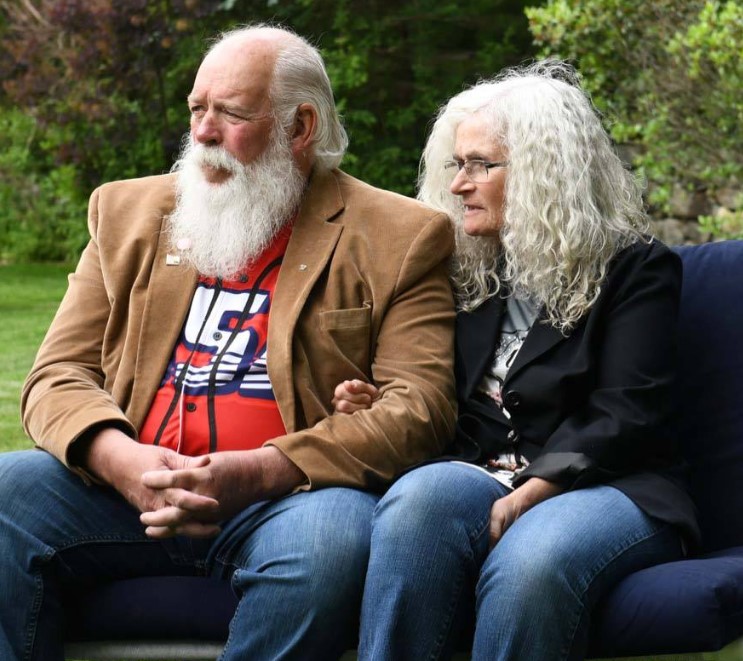 Rep. Harry Bean and his wife Priscilla Lost almost $2 million in the FRM scandal in 2009.

By PAULA TRACY, InDepthNH.org
MEREDITH – About 150 people who lost money in the infamous Financial Resources Mortgage’s $33 million Ponzi scandal will be seeing a check soon from the state’s $10 million relief fund.

From a line cook in the Lakes Region who will get back about $3,000, to business professionals, a state House Representative, and former NFL athletes, the checks have not yet been cut but will be soon, said Michael S. Garrity, spokesman for attorney General John Formella.

State Rep. Harry Bean, R-Gilford, said he and his wife Priscilla lost almost $2 million in the scheme, not counting what their extended family members lost. Bean and a half dozen other families have been pressing lawmakers since the 2009 FRM collapse to make right their losses.

Bean, who owns about 70 rental units in the Lakes Region, said he didn’t invest in FRM to make money, but rather used his assets to make loans to people who were having trouble getting loans.

The victims’ fund can’t make up for the money lost after he and his wife worked 75 hours a week each for many years to build their business, Bean said.

See the full list of FRM claimants who will receive checks from the state.

Bean, who is serving his third term in the House, said he told colleagues what happened to his family and many others as a result of FRM, but said he recused himself from voting in committee on the pieces of legislation creating the victims’ fund, but did vote for the state budget where the $10 million fund finally became law.

Bean said he believes it was state Rep. Ken Weyler, R-Kingston, who submitted the fund into the state budget. Although some lawmakers saw no reason for the state to pay for investment losses, others thought it necessary for their regulatory failures.

In it, Delaney said: “In the FRM matter, the Department of Justice, the Securities Bureau and the Banking
Department to varying degrees share responsibility for the state’s failure to detect and protect
against the fraud inflicted on its citizens by Scott Farah and Donald Dodge.”

There have been five other families trying to get money back they lost in FRM who have showed up at the state house over the years to plead their case, then “161 victims came out of the woodwork,” Bean said.

The statute provides that the total amount of the $10 million fund, less costs of administration, shall be distributed on a pro rata basis to qualifying claimants, noting that awards are capped at 50% of the claimant’s allowable loss, according to the Attorney General’s website.

Some of the largest checks will be well over half a million dollars in what has become known as the state’s largest financial crime, which was based in Meredith.

About $800,000 is spread among at least five professional football and basketball athletes or coaches who were duped as well by FRM.
They include Henry Domercant, who will get $138,000, Frank Omiyale who will get $236,000, Bobby McCray who will receive $139,000 and Terrence Morris with $182,000 coming into his accounts from the state of New Hampshire.
Last September, InDepthNH.org asked for a list of names of all people who applied for the fund, but the Attorney General’s Office denied the request saying it would violate the applicants’ privacy.

But a second request last week was approved and the list of all people who have been approved for payment was released.

Scott Farah of Meredith, and Donald Dodge of Belmont, pleaded guilty to the scheme.
Dodge served six years and is out of prison while Farah, who pleaded guilty to fraud in 2010 and received a 15-year sentence was released Nov. 25, 2022.

Adam and Susan McIllvene of Maine, spoke to New Hampshire Business Review in 2021 when they opposed an early release for Farah.

They claimed to have lost $850,000 in the FRM scheme and are on the list to receive money from the state fund. Not all who lost money applied for it.

Farah said he lost everything in his life including his wife, and two boys because of “misplaced priorities” and he called his crimes “an addiction” in a “Letters from Prison” essay for Progressive Prisons Ministries.

“You can’t think of anything but the next deal,” Farah wrote.

Officials believe Farah began his business in 1989 and kept the Ponzi scheme up by stealing from previous clients and that once it went into bankruptcy, much of what was left did not go to victims but to pay off debts and fees.

Farah explains in his “letter” that the type of behavior he became drawn to had him “borrowing” money from client’s escrow accounts.
“Why? so I could do more deals,” Farah wrote.

When the real estate market in New Hampshire collapsed in 2009, Farah said, “I couldn’t put the money back and I lost everything.”

In prison in Pennsylvania, he wrote he has turned his life around to focus on God and helping other people learn how to make money. Farah said following the 2009 collapse, he became suicidal.

“Because my priorities were out of whack, I lost it all,” noting his wife of 20 years had left him. His attorney forced him to testify to “state Congress” about what he had done. He was on the front page of newspapers daily.

“I was the most notorious person in New Hampshire,” Farah said, and the media was on him.

But in, fact, he said it was his notoriety – or infamy – that had him being sought out by drug dealers to teach them about the business behind bars.

“I had no way to make things right with the people I hurt,” he wrote.

Some consider FRM among the worst-ever investment scams in the state, which left three state departments pointing fingers at each other over who dropped the ball.

The Attorney General’s Office, the Banking Commission, and state securities regulators all pointed blame at one another.

Files later revealed that some complaints about FRM had been made to both the Bureau of Securities and the Banking Department in the years before the collapse. Then-state Banking Commissioner Peter Hildreth quietly left his job.

Bureau of Securities head Mark Connolly, resigned in 2010 to protest what he charged was a cover-up by state officials. He wrote a book about FRM titled “Cover-up,” ran for governor in 2016 and died three years later.

The Attorney General’s website explained that the 2016 New Hampshire Legislature passed SB 155, which created the Financial Resources Mortgage (FRM) Victims’ Contribution Recovery Fund. It was substantially amended in 2021 as part of HB2. The statute is codified at RSA Chapter 359-P and amended in 2021 Excerpt from Laws 2021, Chapter 91 . The fund offered payments to qualified persons who suffered financial losses as a result of the FRM fraud and an administrator was hired to verify all claims.