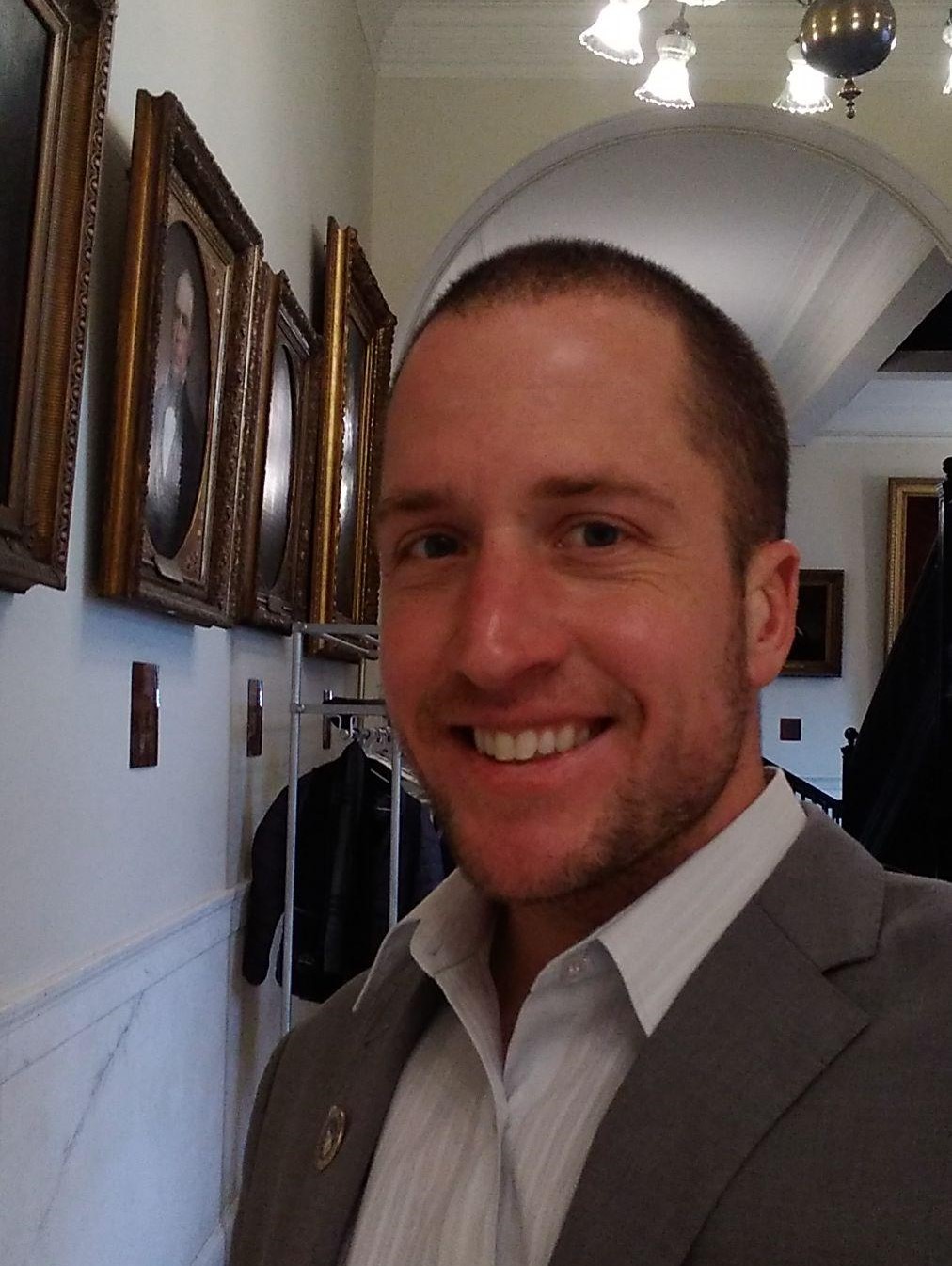 State Rep. Jason Gerhard, R-Northfield is pictured at the State House in Concord.

Gerhard, 37, said he served 12 ½ years in federal prison and will be off probation in a few weeks. He considers himself a non-violent ex-felon and wants his right to own a firearm restored, and those same rights for men and women who may not be able to protect themselves because of a past crime even if they have done their time.

Gerhard did not mention the crimes that originally sent him to prison for 20 years in 2008. Those crimes involved helping the notorious anti-government tax evaders Ed and Elaine Brown in their highly publicized nine-month armed standoff in their Plainfield home.

Gerhard was released early three years ago after 12 1/2 years because of U.S. Supreme Court modified one of the laws he was convicted of.

According to an unsuccessful appeal to the First Circuit Court of Appeals in 2010, Gerhard and two others violated federal law by providing material support to the Browns who refused to surrender after their January 2007 tax convictions, instead turning their Plainfield home into an armed camp. Elaine Brown, a dentist, was released three years ago, but Ed Brown is still in prison.

“Defendants helped acquire firearms and explosives and turn the Browns’ property into a potential death trap. They also made statements to the media and through the Internet to the effect that any law enforcement officers who attempted to arrest the Browns would do so at their peril.

“Attracted by these statements, television, print, and electronic media set up shop in Plainfield to report on the standoff,” the appeal said.

At the legislative committee hearing Friday, Gerhard spoke of a Manchester woman who is a single mother, a combat veteran and a nurse who has completed her prison term, but can’t get her firearm ownership rights restored because she owes too much in restitution for embezzlement.

Gerhard said there is a cottage industry in New Hampshire for lawyers to help people get their crimes annulled so they can erase the felon label and get their gun rights back.

Under the federal criminal justice system there is no way to get his crimes expunged, but he believes he can still get back his firearm ownership rights.

When asked by a committee member about the federal law, Gerhard said he would take care of it with another bill he has filed, HB 512-FN.

It says, “This bill exempts firearms, firearms accessories, and ammunition manufactured in New Hampshire from interstate commerce and from regulation by the federal government.”

That bill is co-sponsored by Rep. Jason Janvrin, R-Seabrook, a member of the House Criminal Justice and Public Safety Committee.

“It’s hard for me to understand how we can have my situation, a state representative who cannot defend himself,” Gerhard said.

“So, if I’m going out into the parking garage late at night and somebody yells, ‘Hey sweet cheeks,’ I’m just joking. There’s no way for me to defend myself. I mean I have a knife, but come on,” Gerhard said.

Gerhard was one of the 97 candidates for state House and Senate who were elected in November with the backing of the New Hampshire Liberty Alliance.

The New Hampshire Liberty Alliance says on its website it was founded in Nov. 2003 as a non-partisan coalition working to increase individual freedom in New Hampshire. “We do this by monitoring bills in the legislative sessions and encouraging private charity, a civil society, and citizen involvement.”

It reviews “liberty-sensitive bills in each legislative session. Bills are evaluated based on their effects on civil liberties, personal responsibility, property rights, accountability, constitutionality, affordability, regulation, fiscal impact, and taxation.”
The Alliance then publishes a weekly evaluation handout called The Gold Standard that is distributed to all members of the House and Senate “prior to their vote in order to give them an understanding about whether a given bill is pro-or anti-liberty.”

It is separate from the Free State Project where people with similar libertarian views have been moving to New Hampshire, but there is some overlap of members. Free Staters say they are not a group, but rather it is an idea.

Gerhard said he has been called a Free Stater and associates with a number of them, but he doesn’t want to be pigeonholed.

“New Hampshire is an amazing state in many ways,” Gerhard said.

During a recent phone interview, Gerhard said he was born in Long Island, N.Y. and enjoyed a good childhood, except that his father died at age 42 when Gerhard was eight.

He said his older brother shot himself to death in 2011. And he has a twin brother.

Gerhard attended college for two semesters and worked on his school newspaper. It was journalism that drew him to Ed Brown’s home in Plainfield hoping for an interview.

He also enlisted in the Army and was arrested at Fort Leonard Wood military base in Missouri after authorities seized a bomb, ammunition and anti-government literature in the basement of his home in Brookhaven, N.Y., according to a report in the New York Times.

For now, Gerhard said he earns his living as a carpenter, and is excited about his new opportunities as a member of the House of Representatives. There are many issues and ideas he wants to explore.

But that time on his student newspapers has stuck with him. “I would like to start my own local paper for Northfield and Franklin,” Gerhard said.