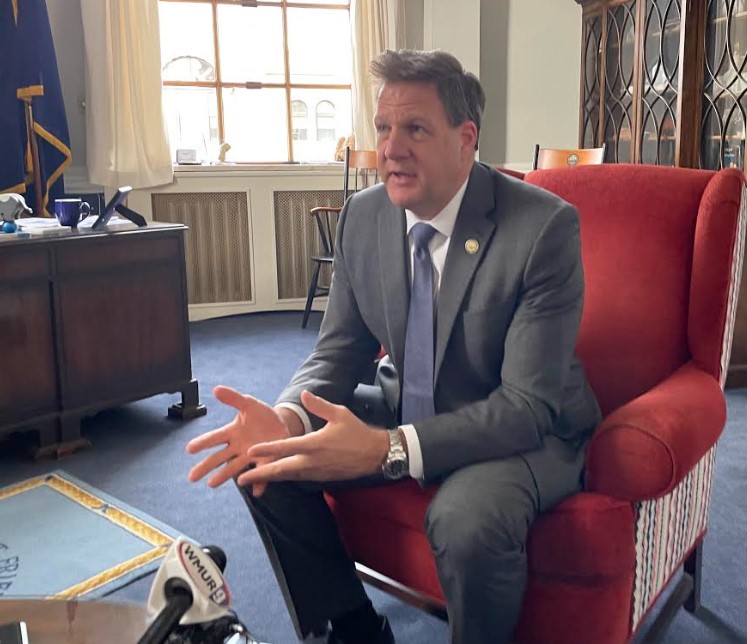 CONCORD – Gov. Chris Sununu said President Joe Biden and the Democratic National Committee made a “massive mistake” in trying to take away New Hampshire’s first-in-the-nation primary status and that Biden “opened a massive door for other challengers,” whom he predicted will come here first anyway.

Meeting with reporters in his office at the State House, Wednesday following the Executive Council meeting, the governor assured that New Hampshire will go first in voting for the next President in both Republican and Democratic primaries despite the Democratic National Committee’s recent decision to give that coveted Democratic primary spot to South Carolina.

The Republicans have said they will allow New Hampshire to go first.

The Democratic party has suggested that any candidate who campaigns in New Hampshire might be “sanctioned” and Sununu said that just isn’t well thought-out.
“Sanctions against that candidate would have to be so huge and inappropriate – that would be probably challenged in court – to outweigh the benefit that individual would get from being on the ballot and winning here. That is everything. So, what are they going to do, sanction the candidate who is actually winning races? Nationally, that just wouldn’t fly and would be a very bizarre situation. Again, not very well thought-out,” Sununu said.

“If you really thought you could challenge Joe Biden, let’s (have) the assumption that someone is going to do that, 99 percent chance, you’d be crazy not to show up here. I mean, you get all the attention….that is how you push back on this manipulative machine of Joe Biden’s…He’s really opened a massive door for other candidates, unlike ever before. What an opportunity to beg somebody to challenge you than to say, ‘I’m not going to the state that goes first and that doesn’t cost a lot of money to run in.’ Again, it’s going to be really exciting,” Sununu said.

Biden came in fifth in 2020 and some, particularly Republicans have speculated that Biden directed his party away from New Hampshire, if he is to seek reelection in 2024, while others claim South Carolina is more racially diverse.

The comments come the day after several prominent New Hampshire Democrats, including former Gov. John Lynch and William Shaheen, the husband of U.S. Sen. Jeanne Shaheen, D-NH, urged Biden directly to back down.

“As your longtime New Hampshire friends and supporters…We appreciate all of the time you have spent here and the deep friendships you have made. We have long considered you and Jill part of our New Hampshire family.
“That’s why we are writing today about the proposed changes to the presidential primary schedule. While we share your desire to elevate more diverse voices in the process, we believe that the proposed schedule could wreak havoc on Democrats up and down the ticket in New Hampshire and unnecessarily jeopardize four critical electoral votes in your re-election campaign.

Sununu was asked at the briefing if threats would deter candidates.
“That is a bigger problem for the DNC than for New Hampshire,” Sununu said. “It never works out for them. Again, we are going first.”

The Democrats wrote Biden that, “We have stood by you through thick and thin, and it is our hope to be a part of your historic re-election in 2024. That is why we hope that you and the DNC will understand the harmful ramifications of this proposed calendar and work with us to find a solution. We believe it’s possible to keep New Hampshire at the beginning of the primary calendar and to elevate the influence of Black and Latino voters in this process. The two things do not have to be mutually exclusive. When you balance what you lose to what you gain, there is no comparison.”