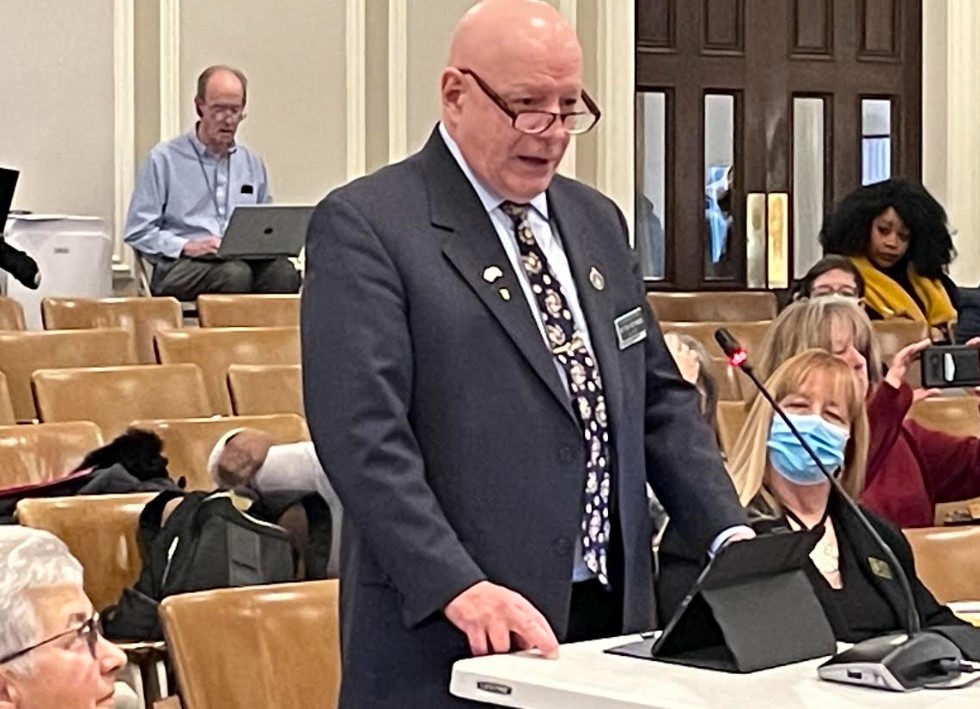 In Representatives Hall, supporters of House Bill 61 said educational freedom in the classroom is at stake and the current law puts a chill on discussions about discrimination, racism, oppression, and mistakes of this nation. The law, RSA 193:40, allows individuals to report teachers for violations to the state Department of Education.

Megan Tuttle president of the state’s largest teachers’ union, NEA-NH said the law is having a “chilling effect” on education.

Teachers’ livelihoods should not be predicated on them talking about slavery and civil rights. She said the union strongly supports the bill to repeal the law. “We need to be trusting educators,” Tuttle said.

But some individuals and former teachers said they support the current law.

Resident Aubrey Freedman said he believes teachers should leave their politics outside of the classroom “and just teach.”

“Educators who promote their politics should be fired, period,” Freedman said.

Every employer has certain rights that can and should apply to teachers. He said the law allows for “discussion” but not “advocation or indoctrination.”

“They should be concentrating on basic things like reading, writing, and arithmetic,” Freedman said. “I think we should have cameras pointed at teachers all the time,” he said, so parents can see what is being taught.

Rep. Peter Petrigno, D-Milford, the prime sponsor of the bill to repeal, asked the 10 Republicans and 10 Democrats on the House Education Committee to recommend the legislature repeal the law. The committee heard more than three hours of testimony.

“Teachers just want to teach,” Petrigno said, “without the interference of the state.”

Now, he said, he knows of teachers who wonder if they can say that the Ku Klux Klan is an inherently racist group.

Petrigno said he got a letter from a known racist saying that kids reject his position.

While he said not all who support the current law are racists, “There are racists that believe the law promotes their agenda.

“Those that truly love freedom are not afraid,” he said. “There is nothing more un-American…than stifling free expression.”

The repeal bill provides that no state education law shall be construed to bar any school employee from teaching the historical or current experiences of any group that is protected from discrimination.

The bill also repeals provisions of the law related to the right to freedom from discrimination in public workplaces and education.

Rhoni Harding of Wolfeboro, a former teacher, opposed the legislation saying that no one should be treated differently in the classroom, period.
While she taught out of state, she is interested in perhaps returning to the classroom “to see what is going on.”

About 75 individuals went to Representatives Hall to testify and listen to testimony on House Bill 61.

Rep. Alicia Lekas, R-Hudson, asked supporters of the repeal measure what is so wrong with the current law.

“What is it about it that makes teachers feel that they cannot teach?” Lekas asked.
Petrigno said: “Regardless of what the law may or may not say, teachers are very confused.”

Rep. Keith Ammon, R-New Boston, who moved to New Hampshire as part of the Free State movement, said there is a lot of disinformation about this law.

He said this is the second attempt at repeal.
Already, Ammon noted, there are things teachers cannot say in a classroom.

“Unfortunately, there is a need among some to instill what some people call ‘collective guilt,” Ammon said.

James McKim, president of the Manchester NAACP said: “In addition to causing confusion in the education community of New Hampshire, in passing the Right to Freedom From Discrimination Act last session, legislators eroded even further the trust people of color and teachers have in government.”

“…This is gaslighting of the people of color and teachers in the state of New Hampshire. And it seeks to provide a remedy for a problem, purportedly teachers teaching their political opinions, that does not exist,” McKim said.

Rep. Tim Horrigan, D-Durham, said the comment about “collective guilt” struck home as he is from a privileged, white family who once owned slaves and he does not want to see that history repeated.
Horrigan said the law as it stands perpetuates racism and fails to educate and address history.

Students need to know “our real history” including “the unsavory side,” Horrigan said.

Rep. Maria Perez, D-Milford, spoke in support of the repeal bill, partially in Spanish, to make a point that people should be able to tell their stories and why they have come here.

“I don’t want people to erase my history,” Perez said.

She said she got an email from a white supremacy group in New Hampshire telling her to go back to her home country.

“I’m here to stay,” Perez said. “Because my voice is needed.”

Rep. Lekas said she was glad Perez is here and going to stay but asked again, what is in this bill that prevents her from expressing that?

“I see the law as protecting you from somebody saying ‘they are better than you…’” Lekas said.

Perez said this law empowers racist people and seeks to threaten teachers with being prosecuted.

Deb Nelson of Hanover, a retired educator who serves on several education boards, said she was speaking on her own behalf and said she encouraged her students to question, read, and draw parallels from past and present, including one case where she showed a film to discuss the McCarthy Era that included a woman who taught in New Hampshire, where people were inaccurately labeled and persecuted as communists.

“High school students thrive on complication,” Nelson said, “This is the stuff of learning.”
“At what point will teachers simply give up and leave the classroom altogether,” Nelson asked.

The vagueness of the language in the current law threatens that learning process, she said.
“It leaves people on shaky ground,” Nelson said.
“Our students are smart and resilient and we do not damage them when we challenge them to think,” Nelson said.

She lived in Baghdad and East and West Africa where her father encouraged governments to follow American Democracy and she said she could not imagine his dismay at this law.
House Bill 61 is due to be voted out of committee and onto the House floor by March 16.

About 1,203 reportedly signed in support of the repeal and replace bill online as opposed to 71 in opposition.

“It’s appalling to see that Democrats in our state are attempting to repeal our anti-discrimination statute. At today’s hearing, supporters of the HB 61 repeal repeatedly called for mutual respect, fairness, and a society that is fully open to participation by everyone. We agree 100%.  Unfortunately, repealing our anti-discrimination law would have precisely the opposite effect.

“The testimonies we heard today were pure myths and scare tactics. The current law does nothing to prohibit the teaching of racism and its effects throughout history. Despite what you heard, the current law does not mention critical race theory. What it does prohibit is teaching children that some of them are inherently racist based on their skin color, sex, race, creed, etc. Is that not what Dr. Martin Luther King, Jr. called for when he said, ‘I have a dream that my four little children will one day live in a nation where they will not be judged by the color of their skin but by the content of their character?’”

Correction: Retired teacher Deb Nelson said students thrive on “complication” not “confrontation.” She showed a film about the McCarthy period that included a woman who taught in N.H.