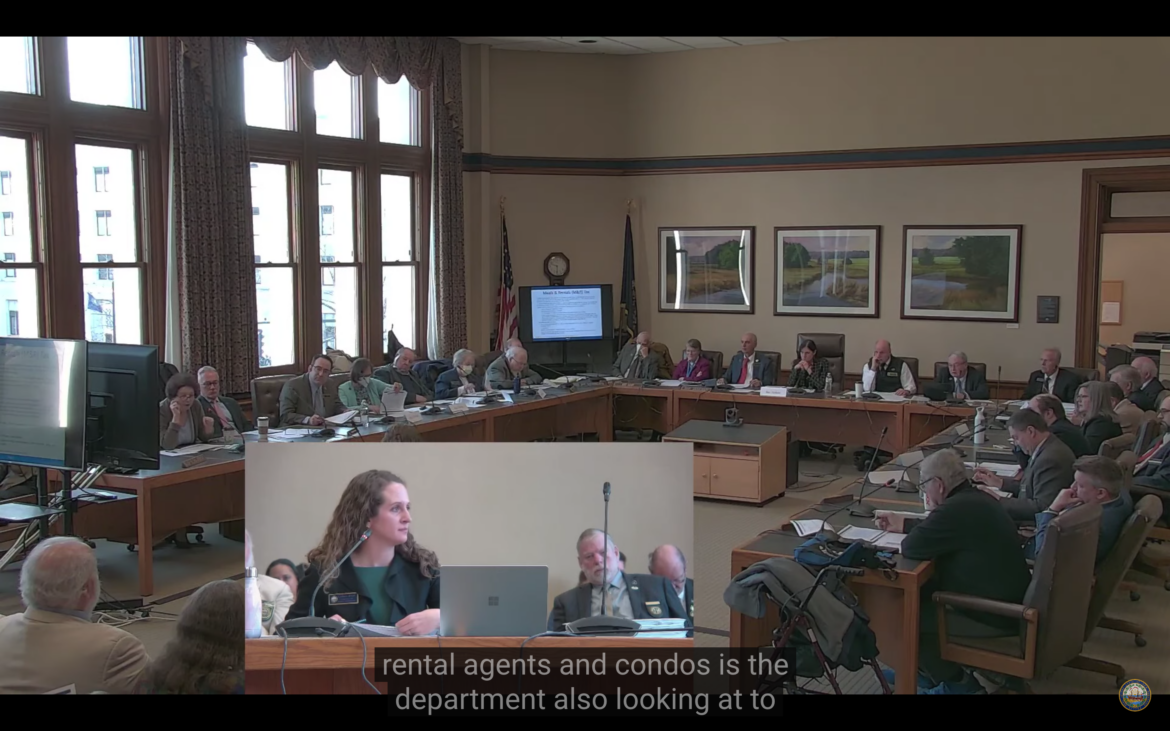 Screenshot of the House and Senate Ways and Means Committee that met Wednesday.

CONCORD — House and Senate Ways and Means committee members were warned Wednesday not to expect the state to experience the same economic growth it has since recovering from the pandemic.

The state has garnered hundreds of millions of dollars of surplus revenue fueled by federal stimulus money and aid that in turn produced significant increases in business profits activity.

But changes made in how the state’s business taxes are apportioned beginning last year and particularly this year, make budget writers and state officials cautious about what the future holds.

Speaking at a briefing for the Senate and House Ways and Means members, Department of Revenue Administration Commissioner Lindsey Stepp told the lawmakers the state’s business taxes are volatile, which is reflected in data on the taxes from the great recession to the impact of the pandemic.

She noted while revenues are ahead of estimates now, she expects to see a “bit of slowing in business taxes.”

In general, the state has had a strong financial performance, she said, but some industries did better than others. Stepp said the state’s business sectors’ diversity helped the state’s financial picture coming out of COVID’s impact.

“We’ll be watching for some slowing of growth,” she said, “and watch the unemployment rates.”

Business taxes are the single largest source of state revenue, and the biggest source of that revenue is from large, multi-national corporations, according to information in Stepp’s presentation to the committee.

She noted the business enterprise tax is assessed on payroll, interest and dividends paid by businesses, while the business profits tax is on a company’s profits.

The two taxes have “tracked the same” until recently, she said, when the business profits tax revenue has grown significantly.

State treasurer Monica Mezzapelle said the state is in a strong financial position and has been able to bank a lot of the federal pandemic money and collect interest.

Revenues continue to be more than estimates, she said, despite 2022 being rocky with global inflation and significant workforce issues.

Mezzapelle said the stock market had its worst performance since 2008 and the bond market its worst in history while the federal reserve increased interest rates seven times.

She noted the US Treasury yield curve on bond rates is inverted with short-term yields higher than long-term which usually indicates a recession is coming in six to 10 months.

The federal reserve is expected to continue to raise interest rates but slow down the increases until inflation is down to 2 percent, she said.

Mezzapelle said the state’s rainy-day fund, that rating agencies look favorably on to help reduce risk, has $159.9 million after $100 million was removed last year for the settlement fund for the abuse cases at the Youth Development Center.

She said the Pew Charitable Trust indicates the median rainy-day fund for all states would be enough money to pay bills for 42.5 days, while New Hampshire could pay its general fund obligations for 36.3 days, and when the education trust fund obligations are included, 21.6 days.

The $159.9 million represents 47.4 percent of the maximum allowed under state statute.

Mezzapelle said one of the bond rating agencies asked about the $100 million withdrawal, but she said it was a rainy day that had to be addressed.

She said the state’s bond rating has been maintained by the three agencies, and S & P moved New Hampshire’s outlook from a stable to a positive. “They may be considering an upgrade,” she said.

They said the state has recovered the number of private jobs lost due to the pandemic better than most New England states, while Maine is slightly ahead, but the other four states have yet to recover all the jobs they lost.

But Lavers noted the recovery is not uniform as some sectors such as professional, scientific and technical services employment have recovered much faster and added more positions. The greatest recoveries are in sectors with higher paying jobs like construction and administration, while health care related jobs at long-term care facilities and hospitals and state government positions have not reached the level they were at before the pandemic, they said.

Unemployment claims are now 40 percent lower than they were before the pandemic and the length of the claims is about 10 weeks, which is the best in New England, Lavers said.

The state has a very tight labor market, noted Gottlob, but it did before the pandemic. He said the state’s participation rate is about 65 percent and a function of those who want to be in the workforce.

After the pandemic, he said younger workers and older workers were slow to return to the labor market.

Gottlob said some are in gig jobs paid in cash and others may have had enough of a cushion with stimulus checks and higher unemployment benefits to survive.

If there is a slowdown, they may return to more traditional jobs, he noted.

Also, he said when the recession eased, a lot of people left the labor market by quitting and then taking another job with higher wages or more in line with their interest creating a great deal of churn in the market which is very costly to businesses.

Gottlob said a high quit rate is a sign of a lot of opportunity and there was in New Hampshire with the high number of job openings.

The year over year job growth for the state is 2.6 percent while nationally the number is a little higher. He said the slower growth in New Hampshire is because the state is labor constrained.

“A lot of people are still on the sidelines,” Gottlob said.

Lavers said some data they have collected indicates more younger women have not rejoined the labor force than men, which could be due to caring for children.

The lawmakers also heard from Dr. Kenneth Johnson, Senior Demographer, Carsey School of Public Policy, University of New Hampshire, who said all the state’s growth in the recent census figures comes from in-migration and not from the natural growth of births outnumbering deaths.

Births have been less than deaths in New Hampshire for several years, but COVID deaths increased that trend, Johnson said, noting 24 states had more deaths than births due to the coronavirus.

He said the people moving to New Hampshire are coming during their prime working years, are well educated and often have children.

He said the state depends on that influx to grow but the change is not universal across the state as most of the influx is in the southern part with the most young people in the Southeast corner.

The state is growing more diversified, with most of the change in young children and the older residents are the least diversified, he noted.

Johnson said baby boomers flooded the state 40 to 50 years ago and now are aging in place which will present some significant challenges.

On Thursday members of the two committees will meet with banking, business and real estate representatives for an overview of the coming trends.