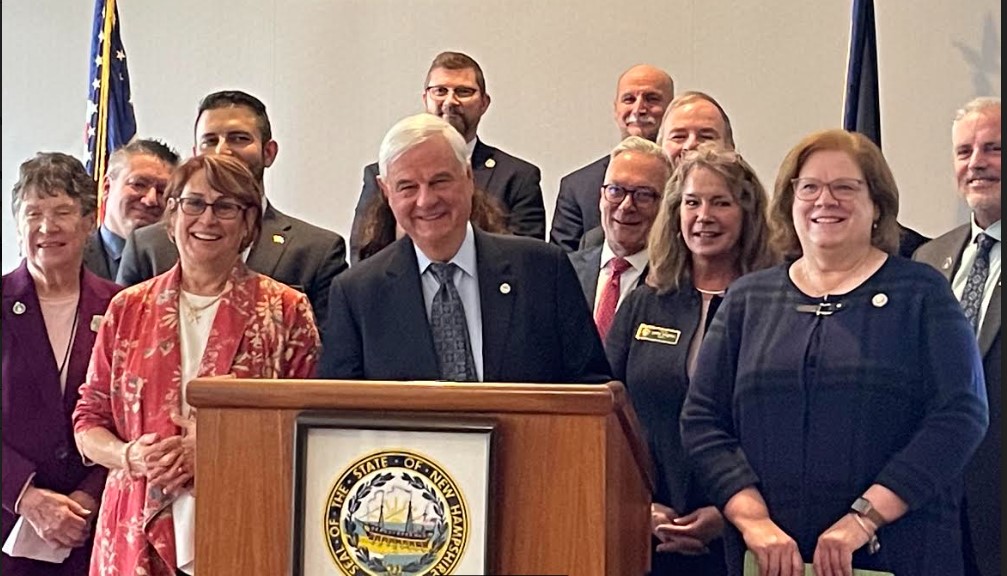 State Sen. Jeb Bradley is pictured at the podium in the Senate chambers Wednesday with Republican senators at a news conference outlining their priorities for the coming session.

CONCORD – The Republican majority in the New Hampshire Senate is focused on preserving the life and prosperity of “hardworking New Hampshire families” by keeping taxes low and providing services to the neediest.

Senate President Jeb Bradley, R-Wolfeboro, along with the 13 other Republican members who make up a 14-10 majority in the state Senate, held a press conference Wednesday to outline priorities for the coming next two years.

The focus is on kitchen table issues of paying the bills and staying healthy.

“I think we know how people are stressed these days,” said Bradley, from high energy costs, rising interest rates, and the possibility of a “looming recession people are worried right now and so our agenda focuses on helping people that need help and our top priority is to do everything we possibly can to keep our economy strong.”

That will mean, Bradley said, to focus on continued strong revenues to protect children, and the disabled, upgrade mental health, and substance abuse programs, and as surplus allows continued property tax relief.

“The Senate Democrats look forward to announcing our legislative agenda and priorities next week. While, of course, there will be bipartisan efforts in the weeks and months to come, there is a lot of work to be done this upcoming legislative session: addressing property tax relief, the budget, ensuring that we are adequately funding education and that NH families have affordable access to housing and childcare. New Hampshire families are the fabric that holds our communities together and women are the touchstone of these families. Protecting the civil rights of women should be one of the top priorities of the Legislature and the Senate Democrats will never back down from supporting women making their own reproductive healthcare decisions.

“We will continue to work with our federal delegation who has effectively and consistently delivered vital funds to New Hampshire to meet the needs of New Hampshire families.”

Sen. Regina Birdsell, R-Hampstead, will lead on maintaining the state’s first-in-the-nation primary status and Sen. James Gray, R-Rochester, will be focused on finance and building a responsible state budget for the next two years.

Bradley said the state enjoys among the lowest unemployment rates in the country and some of the nation’s highest per capita income.

Bradley said people should expect a Senate-led resolution and Constitutional amendment to be introduced to protect the first-in-the-nation primary and “cement its important position.”

He stressed that the Republicans “will never, ever implement income, sales or capital gains tax. Our fiscal efforts have already delivered unprecedented funding back to our communities,” and efforts to further help property tax relief will be a focus.

Bradley said in his view, the state’s Medicaid expansion program which will go away at the end of 2023 without renewed legislation has been very successful.

“I am hopeful we will be able to reauthorize it,” he said, noting that there is a lot of support for it from the business community.

Bradley said the state has successfully funded its portion from liquor revenues and he said he thought that could continue.
“Without a doubt in my mind it has helped people get back into the workforce,” he said.
Bradley added that he hopes to see funding for an environmental assessment of the Mount Washington State Park and its future as part of the biennial budget noting it is critical to preserve public access to the northeast’s highest summit, regardless of disabilities.

And he said he expects a congenial relationship with the House, which is almost equally divided between Democrats and Republicans.
For the past two years, the Senate was also controlled by Republicans, again by the same 14-10 majority though some of its members have changed.