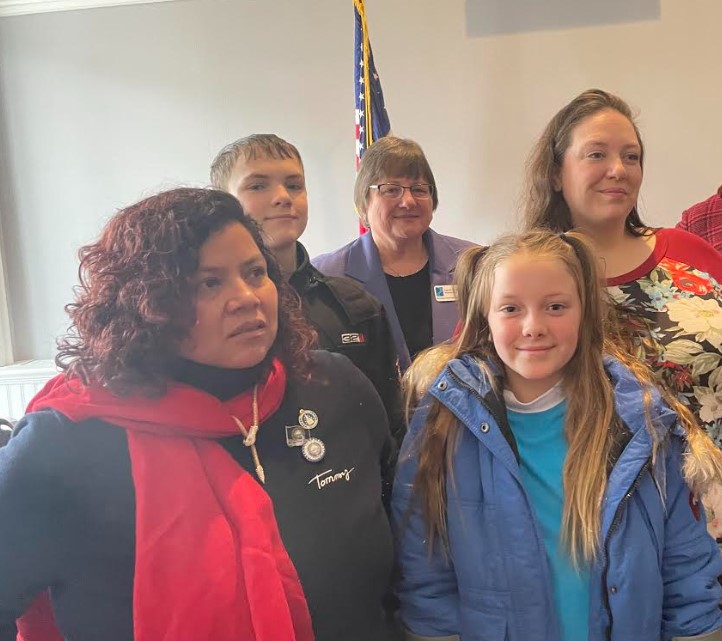 Amber MacQuarrie, of Dublin, who was formerly homeless is pictured her children, Olive and Ethan, standing with state Rep. Maria Perez, D-Milford, at a news conference Wednesday in Concord. Also pictured is Lisa Madden, president, and CEO of Riverbend Community Health.

CONCORD – Healthcare providers and business leaders called for the reauthorization of Medicaid expansion in New Hampshire as the new legislative session begins.

The legislature must act to reauthorize the program this year or it goes away, said Kris McCracken, president of Amoskeag Health, who hopes legislators act to extend the program another five years or better yet, make it permanent.

The percentage of uninsured has decreased from 19 to 12 percent and it has had benefits for labor and overall health since the program began in 2014.
It was reauthorized five years after its inception and is now set for another five years of reauthorization.

At a news conference in the Legislative Office Building on Wednesday, McCracken said, “I pray we are at a point where we can do so….without a time limit.”

Ninety percent of the cost of Medicaid expansion comes from the federal government and that is estimated to be about $530 million for 2023.
There is no state-dedicated funding source and currently a portion of the state’s share comes from liquor sales, which is not favored by advocates for the program.

Speaking at times tearfully, Dublin resident Amber MacQuarrie, a mother of two, told of her experience which included homelessness after being diagnosed with a serious health condition that forced her to leave work and lose her housing.

The program, she said, helped her and her children get back on their feet.

She said while the governor has expressed support for the continuation of the program she urged all legislators to be engaged and support the program.

Keith Kuenning, advocacy attorney for Waypoint, said economic security is better in states with Medicaid expansion, particularly for children.
David Juvet, Vice President of Advocacy, Business & Industry Association, said there is strong support in his organization for this.

“It is not only the smart thing for New Hampshire, but it is also the right thing,” he stressed, calling it “a workforce issue for New Hampshire. Our biggest issue is finding employees,” he said and growth is outstripping the ability to find workers.
He said losing Granite Advantage would be “catastrophic for the state’s hospitals” and a loss of $500 million in federal funding.

“We believe that this is critical for New Hampshire’s legislature to pass reauthorization,” and he noted that there has not been any legislator who has voiced opposition to the program.
Senate President Jeb Bradley, R-Wolfeboro, has been a vocal supporter of the program and noted a study committee found that it is a benefit. He is apparently working on details which may include the identification of a dedicated funding stream, but he did not attend the press briefing.

Juvet called it one of the BIA’s top legislative priorities for his organization.
Nearly one in 15 state residents could lose access to primary health care, mental health and substance use treatment, oral and emergency care, and other critical health services if the program is not reauthorized.

Susan Stearns, executive director of NAMI-New Hampshire which serves over 40,000, said the expiration of the program would exacerbate a mental health problem in the state and more than 11,000 use it for mental health help.

She noted the issue touches home for her as a mother and stated that other mothers like her might be able to sleep better, knowing that their children are protected from potential homelessness and other outcomes where there is a lack of access to healthcare.

McCracken, of Amoskeag Health, a federally qualified health center based in Manchester, which provides primary, behavioral, and other forms of care said they are particularly aware of the circumstances of individuals who need access since expansion almost a decade ago.

Many organizations like hers have been able to grow their care and grow substantially.

New Hampshire passed the program starting July 1, 2014.
Only five other states — Arkansas, Indiana, Iowa, Michigan, and Montana — created a special expanded Medicaid program, like New Hampshire’s.
New Hampshire’s program was formerly called the New Hampshire Health Protection Program.
It allows adults earning up to 133 percent of the federal poverty level to get coverage through one of the state’s Medicaid-managed care plans.

At the end of January 2019, about 52,000 New Hampshire residents had insurance through Granite Advantage.

The state currently pays for its 10 percent or about $50 million from taxes on insurance premiums paid for customers who are enrolled in the program and a portion of liquor commission profits designated to pay for substance abuse treatment or behavioral health services. The state cannot by law use the general fund to pay for the program.

In 2016, legislators created a plan to help pay for the state’s share by inviting hospitals and healthcare providers to make donations to the program but in 2017 the federal government said that was not allowed, even though HHS said there was no relationship between how much a provider donated and how much that provider got in Medicaid payments.