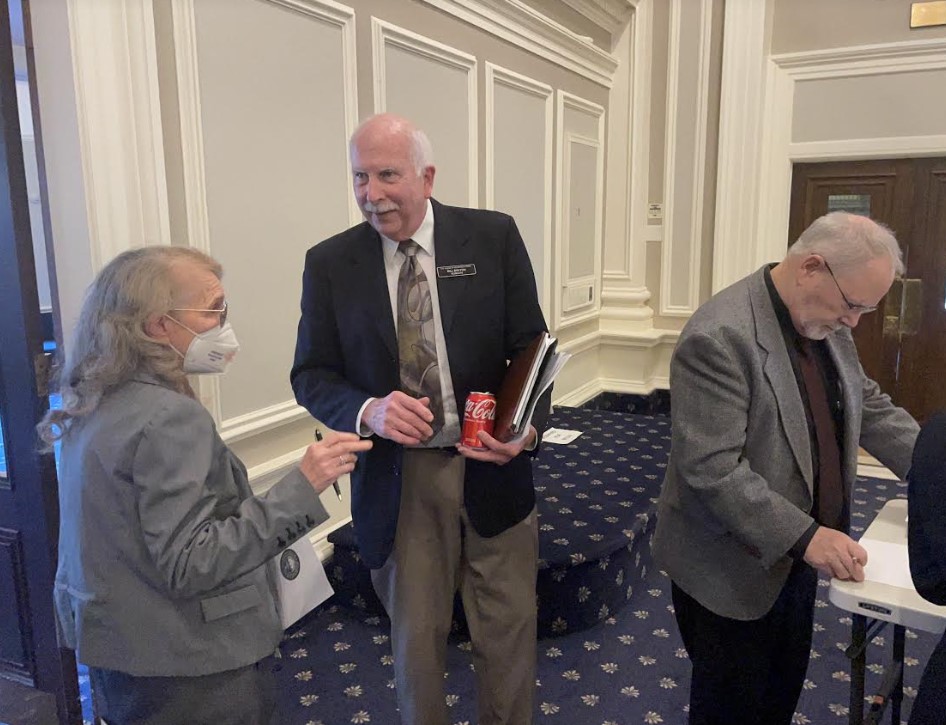 State Rep. Bill Bolton, D-Plymouth, who is facing the camera, is pictured Wednesday signing up for anti-harassment training.

CONCORD – A primer on avoiding issues of sexual and other forms of harassment was offered to state Representatives Wednesday. They were urged to pause before hitting “send” on social media and to ask themselves whether they would want to see that dispatch in the press.

It was voluntary, recorded for future use, and led by Anne Edwards and Jill Perlow, of the Attorney General’s Office.

Perlow described discrimination and produced a list of protected classes from age to color to sexual orientation.
She and Edwards described a range of behaviors that violate rights from rape to jokes in the workplace and how jokes may not be funny and perhaps discriminatory to others.

House members were given a nine-page Policy Against Sexual and Other Unlawful Harassment and Discrimination and offered a chance to sign it as an acknowledgment of their understanding.

“The General Court will not tolerate harassment,” it said and noted that it “refers to conduct or behavior which is personally offensive or threatening, impairs morale or interferes with work effectiveness or employees or members…”

The policy outlines the complaint process to the Chief of Staff and punishments for harassment and discrimination noting that complaints can come from legislators, lobbyists, and reporters.

Complaints can involve an ethics investigation by the Legislative Ethics Committee and involve censure.
The complainant can waive confidentiality.

Employees must be protected against retaliation of any kind, Edwards said. There is a recent change in the law in which financial damages can be awarded against those who retaliate, “or getting even,” she noted.
“Retaliation is serious,” she said. “Once aware of a complaint, everyone who is aware of that needs to be sure they are extremely careful not to retaliate, she stressed.

In a committee, for example, Edwards said, people will become aware of a complaint being filed, and “everyone goes to ground” and that can become seen by the alleged victim as “a cold shoulder.”
“Be incredibly careful on social media, including personal feeds,” Edwards said. “There are always people who get access to that.”

She was asked about how a complaint’s outcome is handled and she said both sides would be told whether it was founded or unfounded but not necessarily what the corrective action was.

In the past, the House Speaker has had to deal with and punish legislators, often related to their actions online in social media.