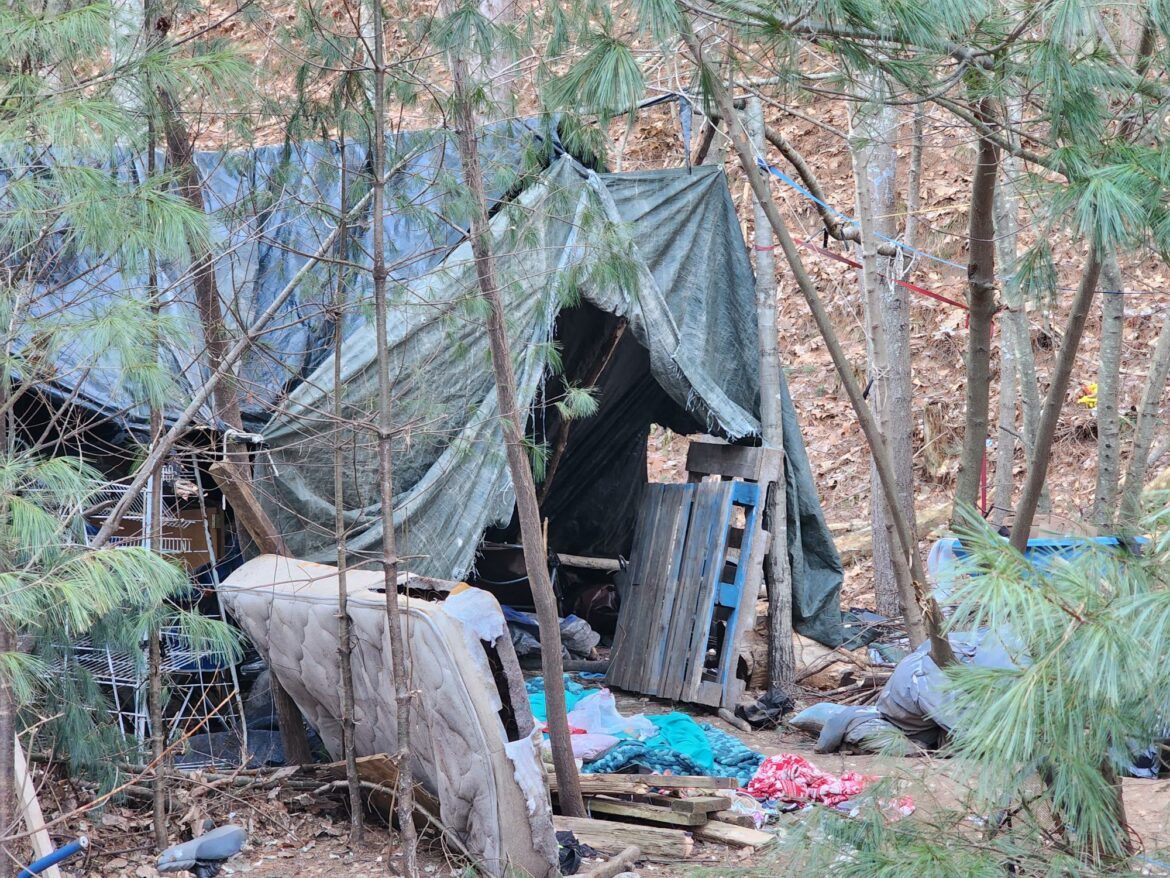 The tent in wooded area of Manchester where a woman is accused of abandoning her newborn after giving birth Dec. 26 at about 12:30 a.m.

MANCHESTER – The woman who was found dead in a tent outside the Families in Transition shelter on Christmas morning has been identified as Amanda Hartness, 34. Another woman who was arrested late Christmas night for allegedly abandoning her son after giving birth in a tent in an unrelated incident appeared in court Tuesday.

The cause of death for the homeless woman who died outside the shelter is pending toxicology testing, according to Heather Hamel, spokesman for the Manchester Police Department.

The woman who gave birth shortly after midnight Dec. 26, in a tent in a wooded area of Manchester, Alexandra Eckersley, the daughter of MLB Hall of Fame pitcher Dennis Eckersley, pleaded not guilty in a court hearing Tuesday in a telephone arraignment from her hospital bed to charges that included endangering the welfare of a child.

In an affidavit filed in court by Manchester police detective Scott Riley, Eckersley, 26, called 911 saying she had given birth in the woods of Manchester shortly after midnight Dec. 26. Along with Manchester fire and ambulance, police searched the area of 3 Electric St. for the newborn.

According to an EMT, Eckersley was unable to remember where she went into labor somewhere in the woods.

“When asked if she could provide a location where the child may be, Eckersley exited the ambulance and began walking toward baseball fields located in the rear of 3 Electric Street. Officer Hennessey stated that during that time walking near the baseball fields trying to locate the child, it was apparent that Eckersley had no idea where the child may be,” Riley wrote. It was 15 degrees out during the search.

After an hour, Eckersley was taken back to the ambulance to warm up and a canine unit was used to search what police believed would be a body at that time.

During that time, Eckersley allegedly stated the child should still be in her tent and agreed to walk officers to the tent.

“The child was located inside the tent still alive and moving,” the affidavit said. The campsite consisted of a large tent made of tarps. Inside were clothing, furniture and other miscellaneous items. Inside the larger tent was a smaller tent which was the sleeping area.

“Officer Vitale walked into the tent where he said he saw a bed with a large amount of blood. He described the area as containing several blankets, which he began to look through for the baby. Officer Vitale stated that he noticed a trail of blood that appeared to run down the side of the bed. Officer Vitale located the baby laying on the ground next to the bed behind a blanket,” the affidavit said.

“While on scene at the campsite Alexandra allegedly played music from her phone and sang along,” Riley wrote.

Eckersley allegedly admitted to Vitale that she uses cocaine and marijuana and the last time she used was two days earlier. She refused medical attention several timers but finally agreed to go to the Manchester police station to answer questions in exchange for food and a lighter to smoke a cigarette, Riley wrote.

From the time of Eckersley’s 911 call to the time the newborn was found was about an hour and 13 minutes.

Police said the baby boy weighed about 4.41 pounds and the mother had been about six months pregnant. The newborn’s condition was not available, but police said he was later taken to Dartmouth-Hitchcock Medical Center.

“(Alexandra) stated her boyfriend George told her the child didn’t have a pulse and she didn’t know how to check,” the affidavit said.

Eckersley allegedly admitted she and her boyfriend agreed to tell police the incident occurred in the field so police wouldn’t find and take their tents, the affidavit said.

“Detective Stewart asked Eckersley why she never took the baby with her and she stated, ‘what do they tell you when a plane goes down? Save yourself first.’”

“Officer Hennessey asked Eckersley why she walked away after and responded that once she gave birth, she didn’t know what to do.”

Hennessey believed that Eckersley was under the influence of drugs and that she seemed unsteady on her feet and would thrash around side to side, according to the affidavit.

WMUR aired a segment showing Defense Attorney Jordan Strand arguing before Judge Diane Nicolosi that Eckersley should be released on personal recognizance bail and that her actions showed no evidence of dangerousness. The charges included second-degree assault, endangering the welfare of a child, falsifying physical evidence and reckless conduct, according to WMUR.

Nicolosi set bail at $3,000 cash, according to WMUR, on the conditions that Eckersley have no contact with the newborn and she must live at a sober facility or with her parent or a state or court approved residence.