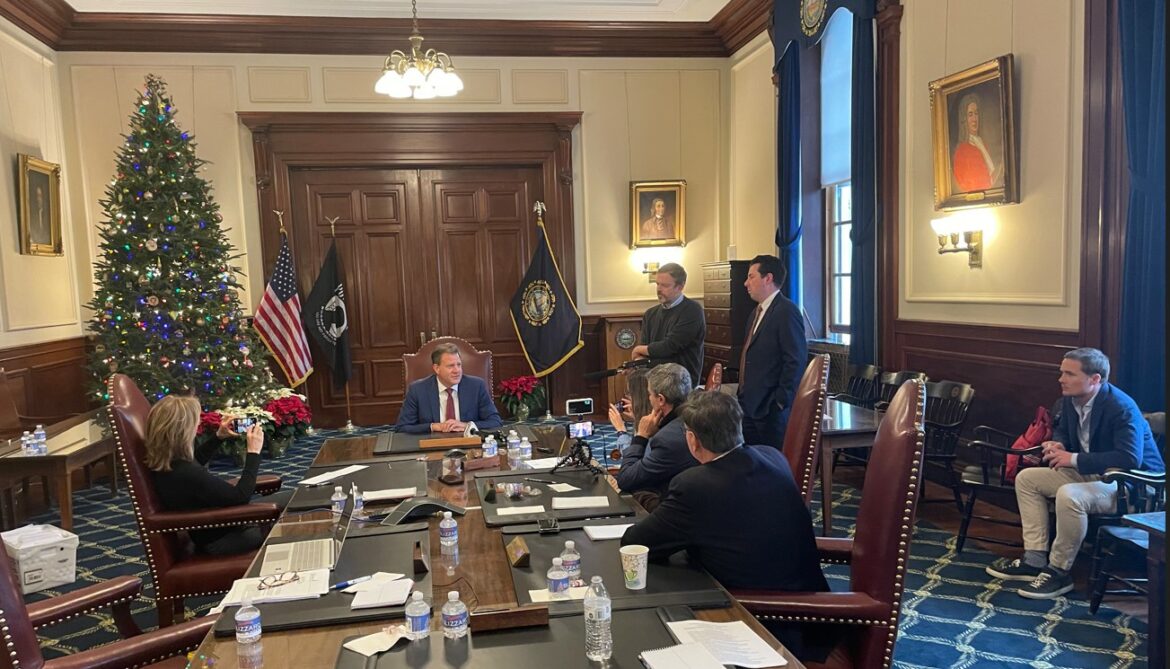 Gov. Chris Sununu speaks to reporters at a press availability Wednesday at the Executive Council Chamber at the State House.

CONCORD – Gov. Chris Sununu has been doing a deep dive into the exploding heat and energy costs looking at the region’s grid into the future, renewables, and said he believes that hydropower is one of the state’s best options for inexpensive, renewable energy.

“This is the issue over the next few months,” Sununu stressed at a meeting with the press this week.

Newly elected for a fourth term, Sununu spoke at length about utility concerns and said he thinks a new version of the controversial Northern Pass may be the solution.
Sununu supported the Northern Pass project which failed to get approval from state regulators and was the source of significant opposition with its plan to run electricity on high voltage transmission from Quebec through New Hampshire into Massachusetts.

“I think hydro is a huge opportunity for this state that we have not fully capitalized on, not just hydro here from out of Quebec. That is some of the cheapest electricity in the western hemisphere…and it is literally just a few miles over our border. Let’s find a way to tap into it. Whether it is another version of Northern Pass or another expansion of opportunities working with some of the utilities here, that is all on the table,” Sununu said.

“We will make sure we do it right, but I think we have to allow every possibility to come to the table because individuals will go cold. Individuals, unfortunately, will go without heat whether it is this winter or next winter.

“And that isn’t, um, if you go without air conditioning in the summer, it can be very dangerous of course. You go without heat in the winter, and people die. This is a whole different ball game,” Sununu said.

He was not as enthusiastic about solar power.

“And to say we are just going to make our entire grid based on solar power and all that kind of stuff. There is a place for solar in our mix but especially in the winter when it snows and it is cold and cloudy that is not going to provide the reliability we need to keep prices low, it actually skyrockets because all those projects take a subsidy and a typical solar panel adds about 12 percent the efficiency of a natural gas plant,” Sununu said. “The lack of reliability drives prices through the roof.”

Sununu has been criticized in the past for vetoing legislation that encouraged alternative energy sources.

FEW TAKING UP OFFERS TO HELP

New Hampshire’s home heating oil prices average just over $5 a gallon and other average prices are here https://www.energy.nh.gov/energy-information/nh-fuel-prices, far above the prices from this time last year which were $3.28 a gallon https://www.eia.gov/dnav/pet/hist/LeafHandler.ashx?n=PET&s=W_EPD2F_PRS_SNH_DPG&f=W

While Sununu and the legislature advanced efforts this fall to aid New Hampshire citizens by expanding and lowering the income thresholds to access financial help for oil heat, making a low-income program accessible to middle-class, not as many families have taken advantage of the program as he had expected and hoped, so far.

But it has been fairly warm, so far, too, he noted.
Fuel Assistance benefits range from $304 to $3,024, depending on household income and energy costs with the average benefit $1,342 paid directly to the fuel provider as an up-front credit on their bill, according to the Department of Energy.

In addition to federal funds, the legislature has injected $35 million more to help folks out, this winter.
While the Department of Energy administers the program, the on-the-ground work is done by the five local Community Action Programs or CAPs with whom the department contracts.
Benefits are calculated taking into account household income, energy costs, number of heating degree days within a region, and housing type.

“This targeting allows households with the lowest incomes and the highest energy costs with the highest benefits,” the Department of Energy states on its website.

“We are still seeing less of an uptick of that opportunity than we would have anticipated given the incredibly high rates,” he said which are now above $5 a gallon for oil heat.

Six months ago, utilities passed on huge rate increases approved by the state’s Public Utilities Commission and the  PUC has hearings set for Tuesday, Dec. 13 with Eversource.

On Thursday, Eversource said it would be asking for a rate that would go down about 10 percent from current rates but still be 40 percent more than the same time last year for its residential customers.

Liberty Utilities is also expected to come in with a rate change request for February.

The PUC’s job is to ensure the process was followed, Sununu said.

“What hurts us the most is because we are essentially at the end of the line and farthest away from the source so prices here are higher than the national average,” Sununu said.
“At the end of the day, we have to say ‘yes’ to the natural gas,” Sununu said and there are no viable, inexpensive alternatives.

But he said this energy problem is not just for this winter and solutions have to be found.

Sununu noted what is true and “bizarre” right now is it is actually cheaper to deliver natural gas from Europe than through the United States.

“You have a bad policy out of Washington, combined with the war in Ukraine, combined with the fact that we have a limited amount of natural gas that can physically come into New England through New York,” he explained.
He said natural gas is the main driver of the reliability of the electric grid and while some plants can convert to using oil, oil is still too expensive.

JONES ACT WAIVER COULD HELP
Sununu said he and other governors have requested a federal waiver of the Jones Act but have not yet received a response.

This 1920 maritime law restricts goods shipped into U.S. ports to be on vessels owned by U.S. residents.

Waivers of the protectionist legislation have been allowed by the federal government during natural disasters.
Sununu said it would only be a temporary fix but “it would definitely help.”
He said there could also be efforts to incentivize natural gas production.
The good news, he said, is there has been a warming trend throughout Europe and the United States which has allowed a buildup of natural gas reserves so far.

WHAT WILL REPLACE MYSTIC
“It’s not like we are putting on new power plants online here in New England,” Sununu said.

In fact, it’s the opposite.
A big question that could impact New Hampshire is the future of a plant on the Mystic River in Massachusetts, he said.

Exelon’s Mystic Generating Station will be retired in May 2024. It has helped keep the lights on in the region since World War II. It is by far the largest plant in Massachusetts with a 1,998-megawatt capacity.

The company has not yet made a decision to retire Exelon Generation’s nearby Everett Liquefied Natural Gas (“LNG”) Facility (Everett).

“We are continuing to evaluate Everett’s future and are hopeful that it will continue to operate following Mystic’s retirement.

“Everett is strategically located, with interconnections to two interstate pipelines and a natural gas distribution system, and a large LNG trucking operation. Marketers and utilities in the Northeast have relied on LNG from Everett for decades as an integral peaking fuel to supplement their pipeline supplies,” according to a company press release.

Sununu said what happens to both the plant and the storage facility “is a huge part of the matrix, a huge percentage of our matrix in terms of how natural gas is used, whether that plant will be open and will we have those megawatts available.”

The subsidy to keep the Mystic facility open from ISO New England could go away and that would put “another massive shockwave through our New England system.”