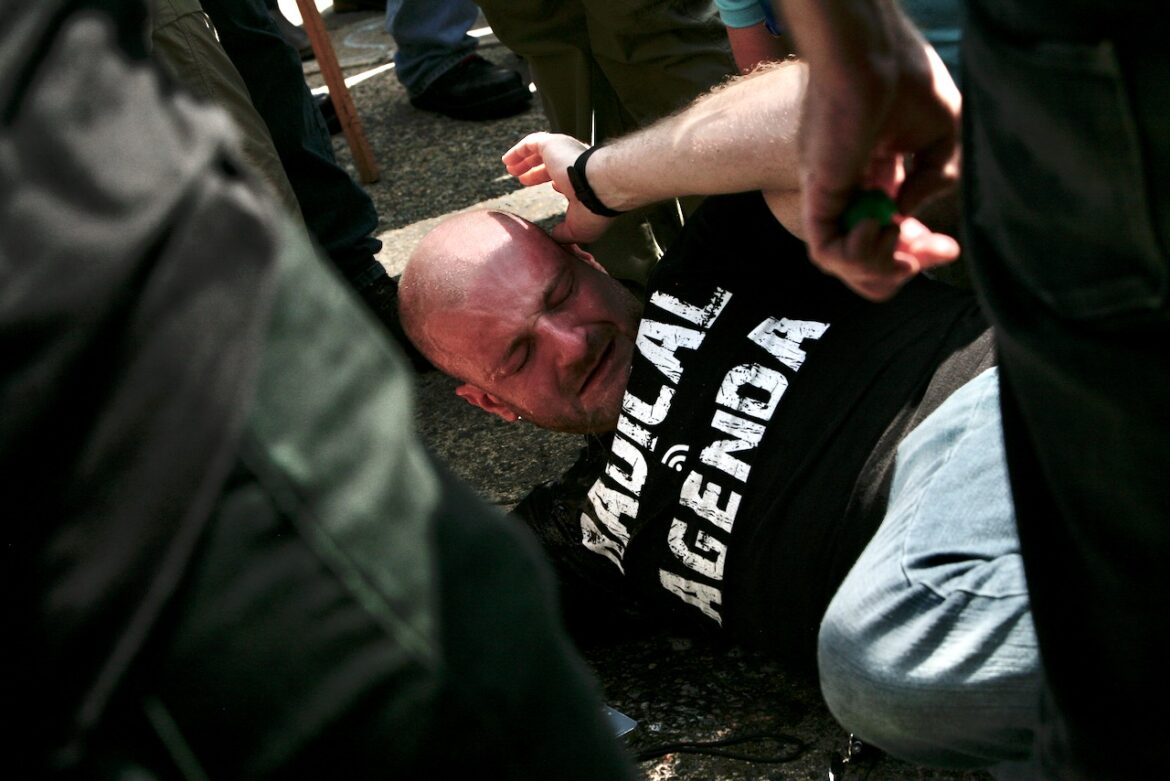 Christopher Cantwell, pictured after being pepper-sprayed at the Unite the Right rally in August 2017 in Charlottesville, Va.

Crying Nazi Christopher Cantwell is out of prison and in need of cash after serving time for his internet threatening conviction.

Cantwell, 41, a notorious hatemonger who gained fame at the Charlottesville white supremacist protests in 2017, is currently at a halfway house in Pennsylvania, according to the United State Bureau of Prisons.

Cantwell came to Keene to be part of the Free Keene libertarian movement, but Free Keene leader Ian Freeman has said in previous interviews that Cantwell’s violent rhetoric directed at police put him outside the group’s standards and he was never actually part of Free Keene.

Cantwell hopes to be able to afford a car and apartment once he gets out this month. So far, his fundraiser has brought in less than $300.

According to an online fundraising appeal Cantwell is hosting, he will be out on the streets in the coming weeks and needs money to re-enter society.

“Normally, when somebody is released from federal prison, they are released to a halfway house up to 12 months before the end of their sentence to have time to recover. Since Cantwell has been persecuted for his speech, he only got one month in the halfway house,” Cantwell writes in the post on a Christian donation website. “In days, not weeks, he’ll be responsible for meeting his own expenses, but he is prohibited from doing his job while at the halfway house.”

The website indicates that Cantwell is the person who organized the fundraiser, which is seeking $10,000 in donations, though he is referred to in the third person throughout.

That job Cantwell complains he cannot do because of prison rules was hosting a white supremacist internet radio show and blog, which ultimately led to his arrest and imprisonment.

Cantwell has appealed his conviction for threating a member of the Bowl Patrol, a white supremacist group that engaged in violent rhetoric. No ruling has yet been made on the appeal.

“Cantwell’s criminal appeal has been pending before the First Circuit Court of Appeals since oral arguments in March of 2022, and there is reason to expect his criminal conviction will be overturned,” Cantwell writes. “But these years long fight has left him impoverished and exhausted. He needs your help.”

Cantwell was sentenced to prison time last year after his conviction in the United States District Court in New Hampshire. While he was locked up, Cantwell also lost a civil lawsuit brought against him and other organizers of the 2017 Unite the Right rally that left one woman dead. Cantwell currently owes $500,000 in damages as part of that lawsuit.

Cantwell struggled for years to build up a career as a hate pundit, spewing anti-Semitism and racism in his radio program and online forums. He reportedly served as the inspirations for the Tree of Life synagogue shooter who murdered 11 people at the Pittsburg temple. In the last few years, he ran afoul of other online hate mongers who suspected him of being a federal informant. This is at the heart of his feud with the Bowl Patrol.

The Bowl Patrol is a group of white supremacists who elevate racist killers like Dylan Roof as part of their online ideology. They also advocate for mass, racist killings, according to court documents. The group takes their name from Roof’s bowl-style haircut. Roof is the mass murderer who shot and killed nine African Americans during a church service in Charleston, South Carolina.

Mackey was later identified in another case as California man Andrew Casarez, who reportedly lived with his parents and grandparents.

Cantwell earned his Crying Nazi moniker at the 2017 white supremacist Unite the Right rally in Charlottesville, Virginia, when he was seen in an emotional video reacting to news he was going to be arrested at the rally.

Cantwell was convicted in 2018 on two counts of assault and battery for dispersing pepper spray on counter protesters in Charlottesville. He was given a suspended prison sentence but ordered to leave the state of Virginia and not come back for five years.