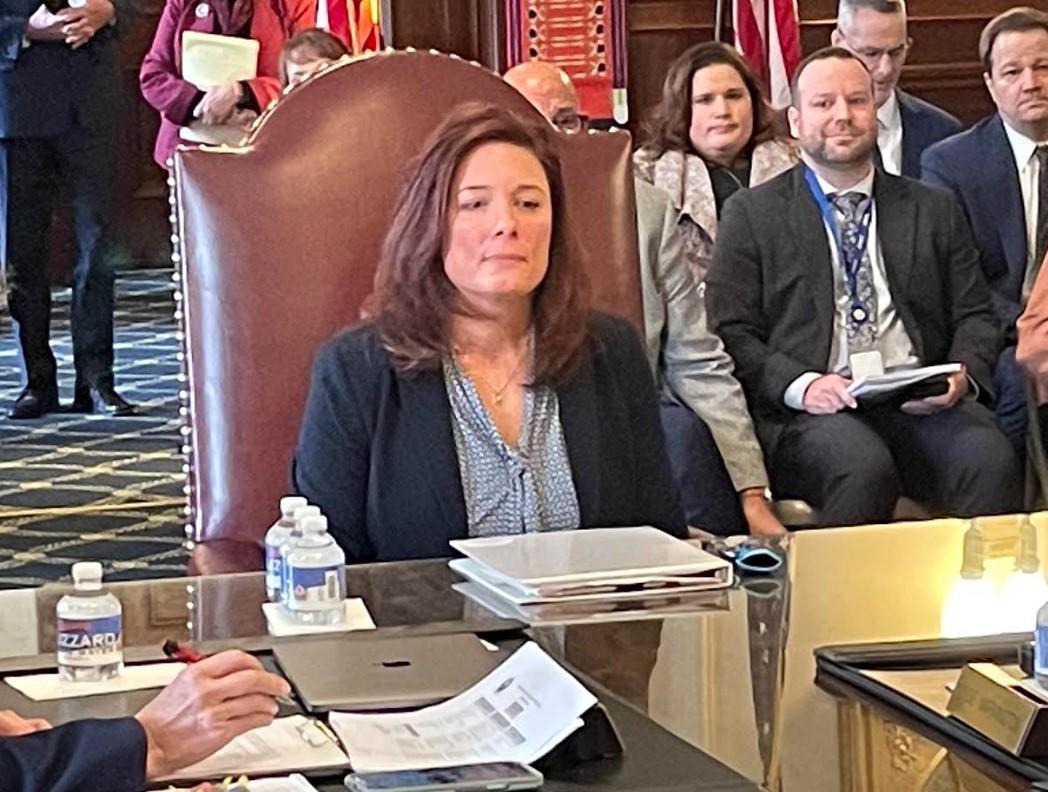 Lori Weaver, the governor's pick for acting commissioner of the Department of Health and Human Services, is pictured Thursday at a hearing before the Executive Council.

CONCORD – For the most vulnerable in the state who need its services, a new leader may be emerging from within, at least for the next year, as the head of the state Department of Health and Human Services.

A public hearing was held Thursday for Lori Weaver, the governor’s pick for acting commissioner of the Department of Health and Human Services.
She would temporarily replace the departing commissioner, Lori Shibinette through Feb. 2024 or until a new commissioner has been selected from a nationwide search.

Most of those speaking at the hearing before the Executive Council at the State House, including several state commissioners, praised Weaver and her personal skills needed to head up the state’s largest department. She was described as a “silent warrior” behind the scenes for the department.

Two who opposed the nomination said the department needs a new direction and did not direct their remarks at Weaver as a candidate.

Weaver has been working for 20 years in the department, the most recent in its administration as deputy commissioner.
If approved, a salary of $147,020 would be provided to the Concord resident.

Weaver said she has worked under seven commissioners and has a 34-year history in helping others here, from early work at the former Youth Development Center to today where she has closely worked with Shibinette.

Weaver said she was drawn to a career in counseling and social work then switched to administration and has put those skills to work in the department which has about 1,124 employees.

Its operating budget is by far the largest in state government and like other departments, it is suffering from a lack of staff.

“I have high expectations not only for myself but for everyone in the department,” Weaver said in her opening remarks to the state’s Executive Council, which will vote on confirmation next Wednesday when the council next meets.

She said the department suffers from “unprecedented vacancy rates,” but she believes the challenge can be managed with teamwork, collaboration with other agencies, and higher salaries for its workers.

“The responsibility of the position is enormous,” she acknowledged.

Asked by Executive Councilor David Wheeler, R-Milford, if she is interested in the full-time position as well, and she said yes, provided there is support for her to do that.
Councilor Joe Kenney, R-Wakefield, called this the “most important commissioner job in state government.”

Asked if she saw herself just stepping into the shoes of Shibinette or striking out on her own path,
Weaver said her loyalty was not to individuals so much as to the department.

“We are in a different place with COVID now than we were three years ago,” Weaver noted. “We have the ability to manage.”

Asked by Kenney which comes first for her, public health or privacy she said, “I think they are both important.”

On Thursday there were more than 20 people in need of a bed for their mental health crisis being housed in hospitals until psychiatric beds become available.

“We are going to have to figure out how to open up those units,” Warmington said.

Weaver said she agreed that it needed to be done and noted it could be done incrementally.

Weaver said the purchase of Hampstead Hospital to become the state’s mental health hospital exclusively for youths, is a great step forward for the department.

The biggest issues for the department are related to the lack of staffing, she said.

“Workforce is greatly impacting where we could be” in addressing mental health concerns across the state, she said.

“We work hard to get a lot more beds online,” she said, “but again, staffing remains the issue.”

Weaver said she does have a good relationship with the unions and supports an increase in wages.

We are in a bargaining year, she noted, and that could help the state from a recruitment potential.

“I completely stand behind staff in higher wages,” she said.

Victoria Gulla of Spofford opposed the nomination saying that everything the department did during COVID-19 was wrong.

Also speaking in opposition to Weaver’s nomination was Terese Grinnell of Loudon, a nurse, who has been an outspoken opponent of vaccinations.

“I’m here for the children who all lost their education,” she said, adding “DHHS needs fresh blood.”

“The current deputy commissioner of the largest agency in state government, Ms. Weaver has served various roles throughout the department extraordinarily well over the last two decades. She is ready to tackle critical issues impacting countless Granite Staters every day: homelessness, food security, mental health care, the opioid crisis, and more.
“I look forward to working with her to expand access to quality, affordable health care services for all,” Warmington said.