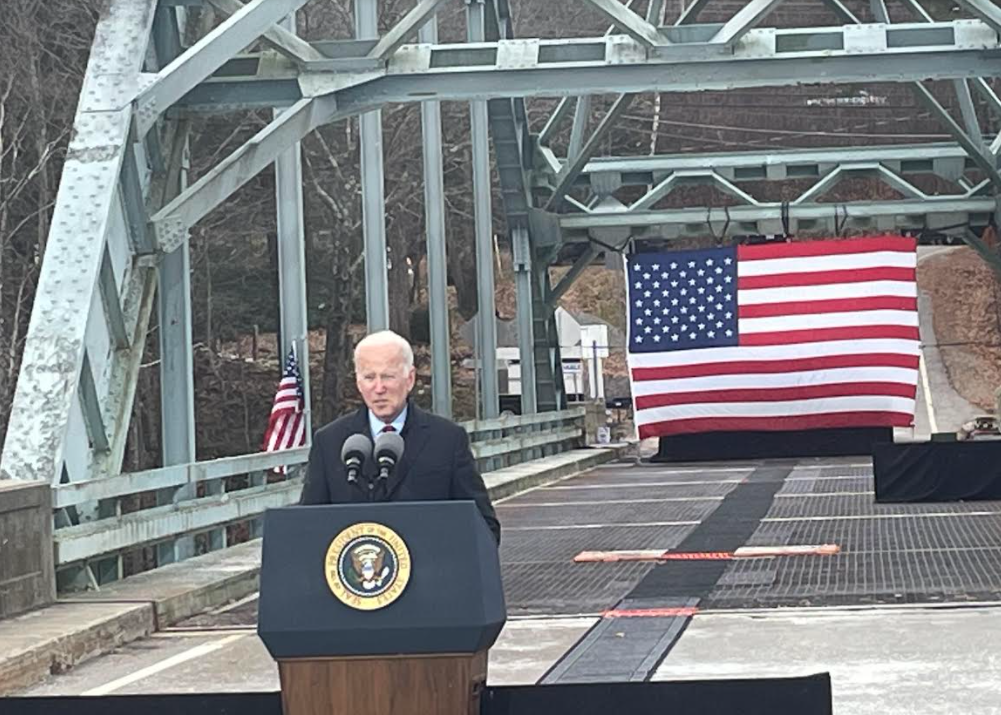 President Joe Biden addresses the crowd on the Green Bridge in Woodstock on Nov. 16, 2021.

On Friday, Gov. Chris Sununu said: “This was Joe Biden’s decision, and once again, he blew it…It’s a terrible disservice by Democrats to try and strip Granite Staters of the First in the Nation status that they have worked hard and earned time and time again. The good news is that our primary will still be first and the nation will not be held to a substandard process dictated by Joe Biden and the Democrat Party.”

President Joe Biden has asked the Democratic National Committee to make New Hampshire and Nevada Presidential primary elections the same day, one week after South Carolina’s, according to a Washington Post report.

The Post quoted Democrats who were briefed on the plan and said the plan to remake the party’s nominating calendar shocked party leaders.

“In New Hampshire, it doesn’t matter how much money you have, where you come from or who knows your name – in our primary, everyone has a fair shot. It’s tremendously disappointing that the President failed to understand the unique role that New Hampshire plays in our candidate selection process as the first primary state,” Shaheen said.

She called the decision short-sighted.

“As frustrating as this decision is, it holds no bearing over when we choose our primary date: New Hampshire’s State law stipulates that we will hold the ‘first-in-the-nation’ primary. That status remains unchanged as we are bound by State statute.

“We look forward to hosting candidates in New Hampshire for the 2024 presidential primary and showing the country that we should continue to be entrusted with the ‘first-in-the-nation’ primary that yields timely, reliable results with a process that levels the playing field for all candidates, regardless of clout or background,” Shaheen said.

The Post quoted a letter Biden wrote to members of the Rules and Bylaws Committee.

“We must ensure that voters of color have a voice in choosing our nominee much earlier in the process and throughout the entire early window.  As I said in February 2020, you cannot be the Democratic nominee and win a general election unless you have overwhelming support from voters of color — and that includes Black, Brown and Asian American & Pacific Islander voters,” Biden wrote.

U.S. Rep. Chris Pappas, D-NH, said he, too, was disappointed.

“It is deeply disappointing that President Biden has decided to try to upend the presidential nominating calendar and remove New Hampshire from our first-in-the-nation position. As our law stipulates, New Hampshire will go first, and I will continue to work with state and party leaders to uphold our law and ensure our primary remains first on the calendar,” Pappas said.

In an August press briefing, Sununu addressed an article in Politico suggesting Biden was thinking about moving up his home state of Delaware in the primary calendar.

The thought that Biden’s home state of Delaware could replace New Hampshire as the first-in-the-nation primary state is “an insult,” Sununu said at the time.

Sununu said during the press briefing that New Hampshire has earned the seat as first-in-the-nation in voting for president. From election integrity to high voter turnout, he said, the state has it all.

“To think that well, ‘any state can do it, I’ll just put it in my own state,’ it is an insult. It is an insult to all the voters of New Hampshire frankly that the Democratic party thinks it is so easy to do this that it can go anywhere,” Sununu said.