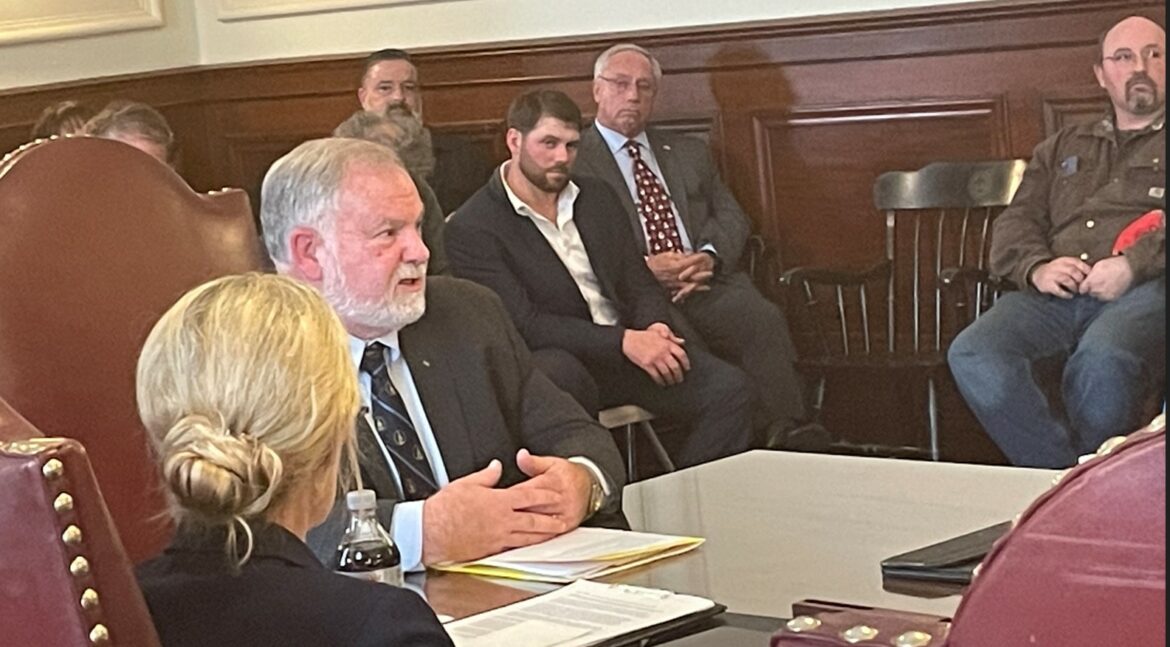 Agriculture Commissioner Shawn Jasper is pictured at Thursday's hearing on his renomination.

CONCORD – Shawn Jasper of Hudson, the commissioner of the state Department of Agriculture Markets and Food, responded to complaints about his work since taking over in December of 2017 at a hearing on his re-nomination Thursday.

The former powerful Republican Speaker of the New Hampshire House, recently renominated by Gov. Chris Sununu to continue as commissioner, would receive an annual salary of $120,562 a year through November 2027 if confirmed to a second term next week by the state’s Executive Council.

A rare public hearing for the renomination of a commissioner was convened by the council at its chamber in the State House because councilors said they were hearing concerns – primarily from the dairy community – about Jasper’s renomination.

The hearing was attended by more than 40 in the farming community who were able to testify for and against the renomination.

New Hampshire Farm Bureau Federation officials said three-quarters of their members support the Jasper renomination and about a quarter do not.

Jasper blamed his own personality traits, a lack of staffing and funding to meet responsibilities, and the stresses and challenges of the job during the COVID-19 crisis as some reasons for the concerns.

Still, he said he is working on all of those and believes he can be effective as the head of the department of 47 employees.

“My understanding is we are here because there are some concerns,” Jasper said.

He said it is impossible to address concerns without hearing about them and the only one he has heard about was the department’s decision to opt out of the voluntary organic inspection program.

But he got to hear some more during the hearing.

Deb Erb, a Landaff dairy farmer, said in her interactions, Jasper has not been open to considering things differently and that he has been “vindictive” in his professional actions.

Dairy Farmer Beth Hodge of of Echo Farm in Hinsdale, which also produces pudding, is active in the agriculture committee.

She opposed the renomination based on Jasper’s “unwillingness to listen to opposing views” and charged that he has used the published Market Bulletin, an agricultural periodical to “bully” people, including her in his column.

Hodge said she wondered how many others might have come to testify if they were not worried about Jasper’s retribution.

She said Jasper’s outbursts are not helpful to the agriculture community and the state needs an energized leader to help build public and private partnerships, engage the industry, and allow for innovation for the industry to thrive.
She thanked the council for their openness and willingness to listen and to hold the rare public hearing.

Farmer Rob Morrill of Concord spoke in support of Jasper, even though he said they had a serious scrape in the past over agriculture policy.

“Agriculture is alive and well,” Morrill said. He said Jasper has been an effective leader.

Executive Councilor Joe Kenney, R-Wakefield, whose district includes many farms, said what he has been hearing and what his concerns focus on is Jasper’s communications skills, particularly with farmers.

Jasper said when he took the job in 2017, his intention was to get out of the office more and to visit farmers but it has been hard to get out from behind the desk noting he has a very small staff and not a lot of time or money.

He said he does get out to all of the fairs and he does it on his own time on Saturdays.

Kenney said people don’t want their names used because they “fear” Jasper as a powerful former Speaker.
“You are probably very correct,” Jasper said. “I come from a long line of strong Type A personalities.”

Jasper admitted he “hung up on someone, that is true.” But said it was because it was unproductive to continue because of the shouting.

Kenney said, “I will say right now the Department of Agriculture has to be customer friendly…with a smile.

“You still got to have that same smile. To vote for you again, I am going to have you put it in writing…because it is that important,” Kenney said.

Jasper said: “Councilor Kenney, I hope you hear from many people behind me that that is what I do.

“I can’t promise you that if someone is yelling at me I will have a smile on my face.”

Executive Councilor Cinde Warmington, D-Concord, said as a councilor she has never had as much feedback on any reappointment, both for and against.

“You have quite a fan club and quite a few people who are mad at you,” Warmington observed.

She said there had been tangible things Jasper has done but a wide number of people who say he is not listening to them, particularly the dairy farmers who complained COVID funds were not equally distributed.

Warmington said what she was looking for was more involvement from him in the state’s agricultural advisory committee which has not met that often “and that you will listen.”

She said she has also heard Jasper is a “climate change denier” and that he is not doing anything to help the agricultural community prepare for such change.

“Climate is changing,” he said, “it has been changing since I have been a boy.”

But he said the department has no direct role in aiding with climate change.

She asked about federal relief aid distribution during COVID-19 and whether Jasper seeks out grant funding sources.

He said he is constantly applying for funds that can help farmers.

Farmer Gene Jonas said Maine and Vermont do a better job in protecting their farming community and more could be done.

Howard Hatch, a dairy farmer in Haverhill, testified against Jasper, saying he hung up on him during a phone conversation.

“We have to have someone who represents everyone,” Hatch said.