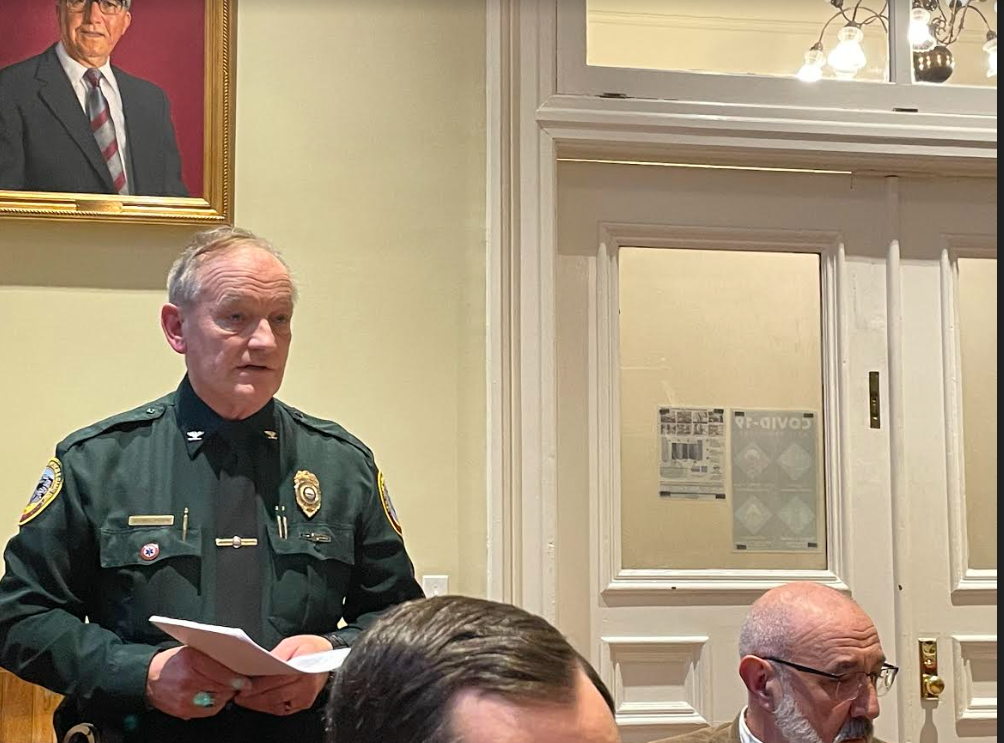 Col. Kevin Jordan of the Department of Fish and Game, testifies Tuesday at the governor's budget hearing.

CONCORD – The state is not paying competitive wages, resulting in what state department heads are testifying is an all-time high in job vacancy rates.

As the new state budgets for 2024 and 2025 are being crafted, the state needs to worry about the impact on services going forward if they are to have such high work vacancy rates, department heads told officials at the Governor’s Agency Budget Hearings Tuesday.

There are job openings aplenty but you might not want to apply for them as you can get in some cases 20 percent more for doing the same job at a municipality or in the private sector.
The city of Rochester is willing to pay about $109,000 a year for an assessor when the state offers the same job for $80,000, for example, according to testimony.

And in some cases, those who do work for the state are having to fill other positions to address life safety needs, like plowing over bridge construction, and that means their work is not getting done.

Retention rates for state employees have been helped with bonuses – in some cases $5,000 to stay put – but recruiting for vacant spots is another story with jobs remaining open for half a year or more and other staff being pressed into service in other roles to keep the departments functioning.

State employee unions have complained that Gov. Chris Sununu is not using the traditional collective bargaining process for wage enhancement and is instead getting wage enhancements through other means, but it is not consistent across the board, they argue.

This lack of workers is a theme resonating this week at the State House as a series of hearings are being held on the governor’s upcoming state biennial budget.

The last one was about $13.5 billion. Sununu has asked department heads to essentially give him a level-funded budget from the current biennium, meaning no significant increases but up to 3 percent more.

A copy of each department’s expense requests for 2024 and 2025 is here https://www.das.nh.gov/budget/Budget2024-2025/Agency_Budget_Requests_ALL_SUMMARIES.pdf

Those budgets include staffing but in some cases, there are no employees to fill those roles and pay is one issue the department heads believe is impacting recruitment.

The overall vacancy rate across state departments is about 19 percent compared to the previous average of about 11 percent, according to the New Hampshire Department of Revenue Administration.

Commissioners came forward, one by one for 15 minutes each Tuesday, to go over their budget requests for the next two years and were consistently asked what are the biggest challenges they face.

Sununu, a Republican who won re-election, along with a majority of Republicans in the Senate and an almost equally divided House, will have his budget suggestion for the new legislature to consider, including this input, though it is a tradition that both the House and Senate make up their own budgets and some variation on it all will likely be what comes out in June.

There is both the capital budget and the general fund budget to consider with the latter relating to ongoing needs of the state and the former, on one-time buys or needs.
Sununu has said interest rates are going up and suggested the state may want to pay for some needs.

The budget is the focal point for the first year of a two-year session.

Sarah Stewart, commissioner of the Department of Natural and Cultural Resources with 1,000 employees, said she expects an increase in revenue with demand for parks and recreational opportunities on the rise.

“My fear is we don’t have the critical needs staff to take advantage of this moment,” she said. “A couple of these positions, we have collaborated,” with other departments.
“We are being as creative as possible with parks,” she said, hiring part-time people to become full-time.
“We are determined not to shut things down,” Stewart said.

She said she is looking for a few new positions and is interested in converting from part-time to full-time positions. Stewart wants a new financial analyst, a full-time lawyer, and a “curator” to manage artwork and archaeological finds.

Consultants are also being sought, she said. The department has received federal American Rescue Plan Act money to help with one-time costs.

Transportation Assistant Commissioner Bill Cass said the department is facing a historic high vacancy rate of 22.7 percent compared to about 8 or 9 percent in March 2020 when the pandemic began.
That is 375 vacant positions out of the total 1,650.

He said the recent bonuses were successful in retaining people but exit interviews reveal that state pay is a driver away from the state jobs with comparatively low wages.

“I am optimistic through bargaining that there will be a meaningful settlement,” said Cass, referring to negotiations with the state employees’ unions.

He noted “red list” bridges are not coming off the list as fast as the state’s goals because some of those folks are being pressed into service to plow the roads.

While that too is a life safety issue the lack of staff means the state is not getting to other work that needs to be done.

Some agencies are working together to have staff across departments.

Other suggestions include pooling resources to be able to draw from, rather than having a staff attorney for example, or an accountant. This could save overall funding, too.

Currently, there are 44 officers, fewer than in the 1970s, Mason said. He said every weekend, all conservation officers are out on search and rescue missions. Funds for those rescues come from hunting and fishing licenses, not the general fund.

Search and rescue used to be lost hunters, Mason said, when his father was an officer. Now not only is it hikers but lost Alzheimer’s patients and anyone in the woods who needs help in any municipality.

The most recent and highly publicized rescue for a lost hiker who was found dead in Franconia will cost $100,000 or more, said Fish and Game Col. Kevin Jordan, “And I won’t ask a family that has lost a child to pay that,” he said.

But an added cost has been to the overtime budget and to exhausted existing staff.

“It beats these guys up, frankly and then I get a call for a 12-year-old lost in the woods and I don’t have the staff, that is a real fear of mine,” Jordan added.

“These are things you are asking sportsmen to pick up the bill for,” Mason said. “I, for one, don’t think it is right. We should have access to general funds.”

Dennis Goulet, commissioner for the state office of Information Technology, said his vacancy rate is 12.7 percent. He said he does rely some on consulting resources but demand for them has also driven up costs.

Asked how he thinks technology can supplement that loss in staff, Goulet said it varies by agency.

He said in the seven years he has been working for the state government he has seen a huge improvement in every agency in applying technology.
Having a strategic plan, effective resource management, and looking for ways to adapt have helped to address workforce shortages, Goulet said.

Rich Gulla, president of SEA/SEIU 1984 issued a news release about the vacancies.

“The State Employees’ Association represents more than 10,000 members from all across the state of New Hampshire.  They come from the private sector, city and town municipalities and many state agencies.  Those agencies have suffered over the past two years. Covid played a large role in that but the state at one point did have a vacancy rate of approximately 30% and employees were facing some very difficult decisions. The governor’s statements yesterday regarding the 24-25 FY budget were welcome sentiments to hear.”

“We are encouraged by his words and we agree with him, when he says, ‘It’s people over programs… it has to be about our state employees,’ for us it has always been about our people, our state employees and we sincerely hope that when the time comes the legislature agrees.”

“As far as where this leads the state in the next two years, it is too soon to tell.  We are currently in the midst of bargaining and as such cannot comment on those proceedings, but our mission is to support our members across all executive branch agencies and to support the by providing them with options and ways to move forward in their fight for equity,” Gulla said.