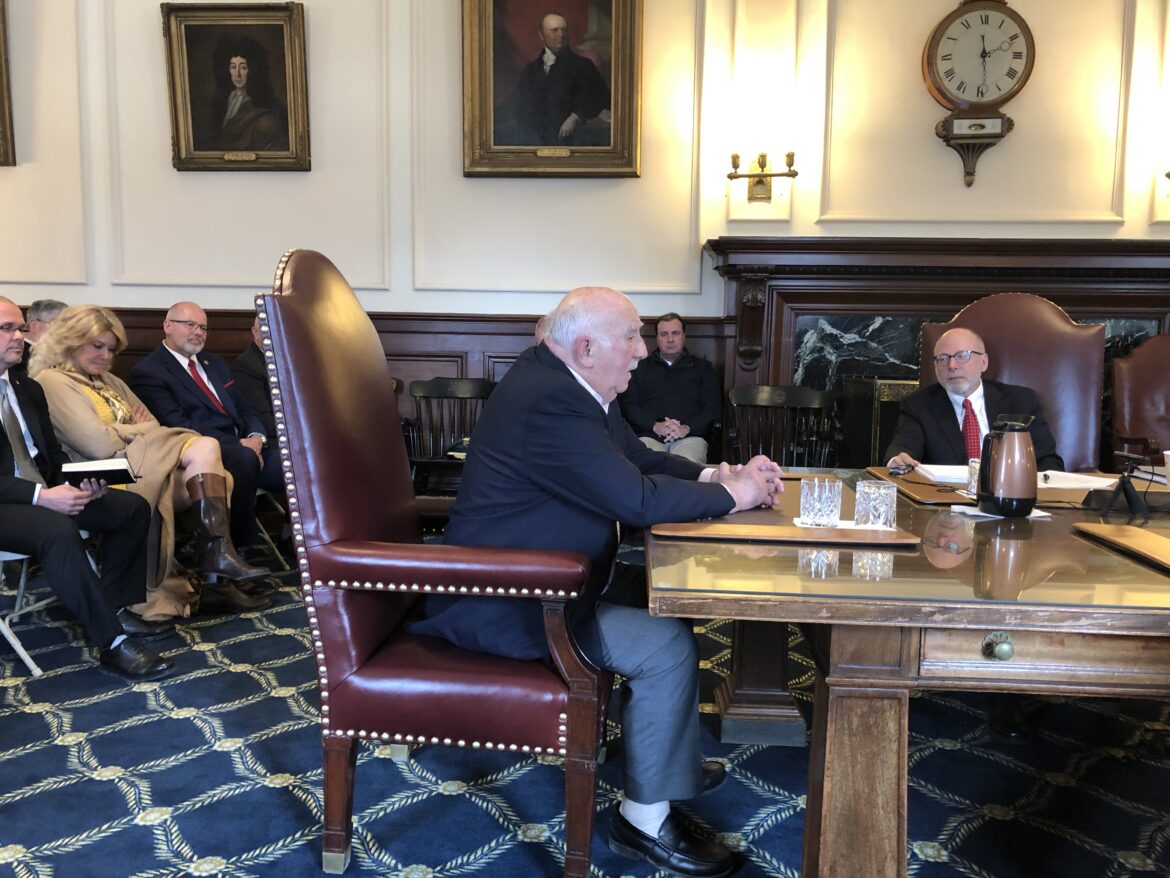 Former Executive Councilor Ray Wieczorek is pictured testifying as a citizen at the council table in 2019. To his right is then Councilor Andru Volinsky.

Wieczorek will be remembered as a man “who served with a smile” and was always willing to help his city and state.

Manchester Mayor Joyce Craig said: “Mayor Wieczorek cared deeply about this city, and many of our beloved institutions, like the Manchester-Boston Regional Airport and the SNHU Arena, were made possible by his hard work.”

Gov. Chris Sununu said in a statement that “Ray Wieczorek served with a smile.

“As Mayor of Manchester and as an Executive Councilor, Ray took the time to listen and connect with his constituents one on one.

“He leaves behind a legacy that will inspire many for decades to come. But most importantly, Ray was my friend. Always there and never wavering. Valerie and I will miss him dearly,” Sununu said.

Wieczorek was born in New Britain, Conn. After graduating from high school, he served in the U.S. Army during the Korean Conflict. He founded Wieczorek Insurance and according to its website, he served Manchester in many capacities including being director and president of the Manchester Scholarship Foundation, commissioner of the Manchester Housing and Redevelopment Authority and was honored with an Honorary Doctor of Law from New Hampshire College.

When the state built an airport access road, it was named Raymond Wieczorek Drive. He has also been named “Citizen of the year” by the Manchester Chamber of Commerce and received Elliot Hospital’s William S. Green Award of excellence.

Senate President Chuck Morse, R-Salem, said, “Susan and I are saddened at the passing of Ray Wieczorek after a lifetime of service to the city of Manchester and state of New Hampshire.

“As Mayor, Executive Councilor, and after his time in elected office, Ray always had the biggest smile and an eagerness to work together to address New Hampshire’s challenges. He was truly one of the Granite State’s finest citizens and he will be missed. Our thoughts and prayers are with the Wieczorek family.”

Karoline Leavitt, who ran unsuccessfully for Congress said she met Wieczorek early in her campaign.

“And he became a mentor, sharing his wisdom from years of public service during visits at his home. We spoke Saturday and made plans for another visit next week,” Leavitt said on Twitter. “I am so saddened to learn of his passing. My prayers are with his family.”

U.S. Rep. Chris Pappas, D-NH, said, “Ray was a dedicated public servant and strong advocate for Manchester as Mayor and Executive Councilor. My thoughts are with his family and all who knew him at this difficult time.”