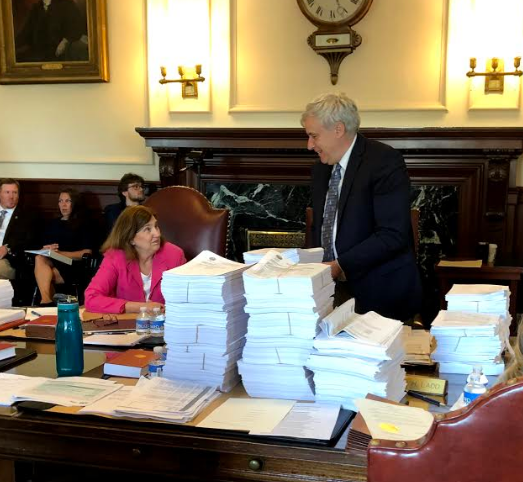 CONCORD – At the Governor and Council meeting Tuesday, Gov. Chris Sununu nominated Lori Weaver, deputy commissioner of the state Department of Health and Human Services as interim commissioner, the Council scheduled a rare public hearing on the renomination of Shawn Jasper as Agriculture commissioner, and the Council voted 3-2 to reject a tabled contract to provide after-school sex education for at-risk youths in Manchester and Claremont.

The Council approved a $70 million, 20-year lease agreement for a new home for the Department of Justice in Concord owned by Steve Duprey in Concord at One Granite Place, formerly an insurance building, and approved $13 million in federal funds to build a new Emergency 9-1-1 call center in Laconia on land adjacent to the former Laconia State School which is being sold.

In other action, the Council also approved $20 million in federal money for the emergency rental assistance program which should get folks through the winter or the school year without having to be evicted and got a brief update on a new program to help with electricity and home heating fuel costs this winter for moderate-income residents. It is estimated some 80,000 homes could qualify for assistance.

The governor urged families who are gathering with elderly and loved ones to help them apply for the program, which will be the subject of an advertising campaign that begins this week.

SEX ED GOES DOWN
After being laid on the table since Sept. 22, the $682,074 contract for two non-profit agencies that provide programs for youths in Manchester and Claremont was voted down, 3-2.

In the past 10 years, the programs had been funded without debate.

Kenney said the past contracts, which he supported, were different from the ones which had been on the table.

“I opposed it primarily because I think parents need to look at the curriculum before it is actually given to the child after school and I also think the middle school curriculum, I would like to see a Department of Education review to make sure it is age-appropriate,” Kenney said, indicating he might be willing to go along with supporting a contract which was altered in those ways in the future.

“I have no problem with sex education,” Kenney said. “It seems as though society is pushing down more and more towards younger, middle school kids and I think we need to make sure it’s age appropriate.”

After the vote, Warmington said she did not buy that argument.

“I think it is extremely disappointing that the Council has taken away this essential tool in educating these very vulnerable teenagers about the things that they need to make healthy decisions about relationships and moving forward,” she said. “It is a harm, as you heard the commissioner (of the Department of Health and Human Services) say, to the teenagers and to our state.”

Warmington added that this was an evidence-based program in targeted poverty areas for high-risk youths that have been proven to reduce unintended teen pregnancy rates and delay sexual activity in teens.

“So to take that kind of a tool away in the areas that we have the high teenage pregnancy rates is inexplicable. The idea is that these parents didn’t have enough input if you look at the consent form they are consenting to everything in the program. So it’s very informed consent and it is really hypocritical to say ‘I am for parental consent but if the parents disagree then we are going to take that right away from those parents,” Warmington said.

She said that the fact that these majority Republicans, who were re-elected, are the same ones who are not willing to fund reproductive clinics.

“It just makes no sense,” she said.

AGRICULTURE COMMISSIONER RENOMINATION IN JEOPARDY
Some in the state’s farm community have been raising concerns about the governor’s renomination of Shawn Jasper as commissioner of the state Department of Agriculture Markets & Food.

The Executive Council tabled the confirmation and called for a rare public hearing. It will be held on Dec. 1 at 12:45 p.m. at the State House.

Jasper was the former Speaker of the House of Representatives and a Republican from Hudson before Sununu tapped him to be commissioner of Agriculture in 2017.

At the last Council meeting, Sununu renominated him and calls started coming into councilors both in support and opposition to his renomination.

A motion to table the confirmation was made by Kenney, whose Executive Council District 1 includes much of the state’s farming communities. It was seconded by Wheeler.

Kenney said in an email last week that he feels Jasper, “has the talent, I just want more out of him.”

In an email prior to the meeting, Kenney said that he was having an ongoing discussion with the commissioner “in order for him to gain my support.”

It’s a family farm and they built Hatchland Dairy Delights with an ice cream stand and added a bakery and are open all year long besides delivering milk to most of the New England states.

“I had very little interaction with him, but he’s the wrong man for the job,” Hatch said of Jasper after the meeting.

“He’s not representing agriculture in the state of New Hampshire,” Hatch said.

He said he heard Jasper only got the job because they wanted him out of the legislature.

“He seems to hand pick the people he wants to help. If they don’t agree with him, he gets very upset. I only talked one time and he hung up on me because my voice got loud,” Hatch said.

He was pleased there will be a public hearing. “Maybe things can look up,” Hatch said.

INTERIM DHHS COMMISSIONER TABLED FOR PUBLIC INPUT
The governor did nominate Deputy Commissioner Lori Weaver, to be the new interim commissioner for the state Department of Health and Human Services, by far the most significant state department.

If confirmed, Weaver will serve until a new commissioner is found or until February 1, 2024.

The governor wanted to suspend the normal procedure of waiting two weeks between nominations and confirmations to install Weaver in the new post now, but the council tabled the matter and later scheduled a public hearing on the nomination for Dec. 1 at 11 a.m.

The governor launched a national search and is working through a long list of candidates.

“It is just taking a lot longer to find a full-time solution,” he said.

Executive Councilor Cinde Warmington congratulated Weaver on the nomination and the governor for making it but she did have a concern that the public would not have a chance to reach out to her.
Two weeks will allow for public comment.

“I do think the public has a part in this process,” Warmington said.

Wheeler said he felt the process brought forward by the governor was “flawed” and he couldn’t vote at this time, agreeing with Warmington to the table.

Sununu said there is precedent to do it that way and time was of the essence.

“This is a department that needs a lot of decision-making,” the governor said. “I’m asking for a confirmation today.”

“We need a signatory,” Kenney said, agreeing in part with the governor. “This is a very important position.”

Attorney General John Formella said the position does not require a public hearing. But Warmington said tabling and voting on it on Dec. 7 would allow time for input which she said is more important to her than holding a public hearing.

NEW HOME FOR ATTORNEY GENERAL’S OFFICE
The legislature has indicated it wants to tear down the current offices of the Department of Justice, across the street from the Legislative Office Building, and make it a legislative parking lot.

That has presented the Commissioner of Administrative Services, Charlie Arlinghaus, with a challenge to find a new home for the office.

On Tuesday, the Executive Council agreed to a retroactive, sole-source contract with 2 Granite Place LLC, owned by Concord Developer Steve Duprey, for a 20-year lease agreement with an option to buy the property at 1 Granite Place, which is about half of the sizable office park near Blossom Hill Cemetery.

The approximately 106,000 square feet will be leased with an option to buy it for $15 million, which Arlinghaus said is a better deal than a full 20-year lease but the legislature has balked at an outright purchase, at least the last legislature did. A new one comes in January. About 65,000 square feet would be used by DOJ with other state agencies possibly able to move into the remaining space.

Kenney suggested that the council vote support the contract but let the legislature know their preference for a purchase rather than an extended lease.

Arlinghaus said the facility is nicer than the DOJ now has, a former bank building, and that it could be used as a recruiting tool because it would allow for people to have offices rather than cubicles.

Also approved at the Council table was $13 million in federal COVID-19 relief funds to build a new E-911 facility in Laconia on public property on Meredith Center Road adjacent to the current E-911 offices and dispatch center for Lakes Region Mutual Aid and Fire, on the campus of the former Laconia State School.

The former school property on Route 106 at Meredith Center Road is for sale and Arlinghaus said he expects to present the developer’s conceptual plan to the council for approval in December.