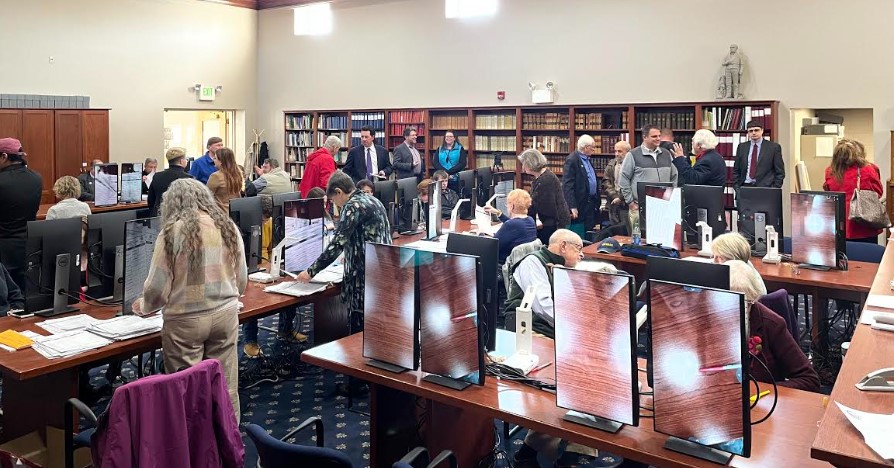 State archives room is pictured Nov. 14, during the Manchester Ward 6 House recount won by Maxine Mosley by one vote. A judge on Nov. 22 ordered a full recount of that race.

CONCORD – A judge ordered a full recount of all the votes in Manchester District 16 Ward 6 House race Tuesday morning denying the declared winner’s attempt to legally stop any further recounting.

But said a full recount is now necessary.

“A review of the recount tabulation is required to ensure the expressed will of Manchester Ward 6 voters is heard and the candidate with the most votes is seated as their state Representative,” Ignatius wrote.

“While (Scanlan’s) announcement of Ms. Mosley as the winner presents complexity, the greater weight must be attributed to the complete and lawful count of the votes cast to determine the will of the people.”

Mosley, a Democrat, was announced winner Nov. 14 over Republican Larry Gagne after the recount by one vote.

Ignatius said Mosley and co-plaintiff state Senate Democratic Leader Donna Soucy failed in meeting the preliminary injunction test to stop further counting of the ballots because they didn’t demonstrate a likelihood of success on the merits.

Mosley and Soucy argued through their attorney Bill Christie at a hearing Monday that Scanlan had no statutory authority to order a second recount of the election results in this case.

And Scanlan contended it is not a second recount, but continuation of the original recount spurred by inequivalent reconciliation recount results.

The reconciliation process entails “comparing the total number of ballots cast, the sum of the votes cast plus undervotes and overvotes and the number of voters checked in as having voted on Election Day,” Ignatius wrote.

On Nov. 17 Scanlan issued a notice “that ballot counting will continue in Hillsborough County State Representative District 16 recount.” Scanlan cited the “the routine reconciliation process…indicated that, …reconciliation numbers and recount reconciliation numbers were not equivalent” and that the audit in the race for governor “disclosed that the total number of ballots cast and counted for the office of governor in this district is greater than the total accounted for so far for the Hillsborough County State Representative District 16 race,” Ignatius wrote.

Republican Gov. Chris Sununu and Democrats weighed in on the order.

“In an effort to subvert the will of Manchester Ward 6 voters, New Hampshire Democrat leaders have engaged in appalling, hypocritical, and outrageous behavior to prevent all legal votes from being counted,” Sununu said.

“I thank Secretary Scanlan and the Court for protecting the integrity of our elections and ensuring the voice of the voters is fully reflected.”

“One thing is clear from this decision – Secretary Scanlan acted outside the law. From the beginning, this case has been about the integrity of our elections.

“The courts agreed with our arguments that the Secretary of State did not follow the statutes, exceeded his statutory authority, and should not have taken the action of calling for an additional recount.

“That is why we are so disappointed the Merrimack Superior Court feels this is an extraordinary circumstance and will now allow for a second recount after the Secretary of State declared a winner in the Manchester Ward 6 race eight days ago.

“Throughout this process we have maintained that New Hampshire election laws do not allow for anyone, whether it be a political party or the Secretary of State, to conduct recount after recount until they achieve their desired result.

“We will explore our options in the coming days, but New Hampshire Democrats will be there for the next round of recounts in the Ward 6 race, and regardless of today’s decision by the courts we will never stop fighting for the integrity of our elections,” Booth said.