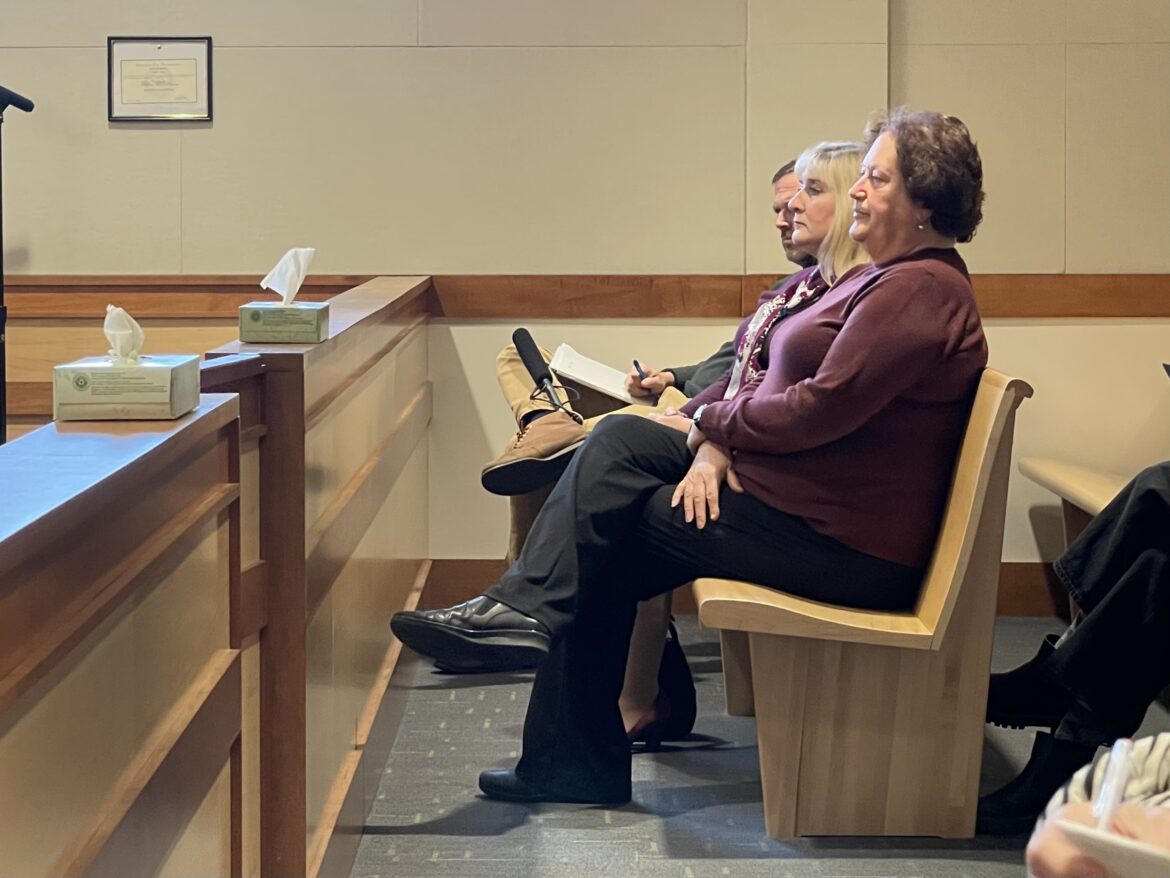 Democrat Maxine Mosley and Senate Democratic Leader Donna Soucy sit in Merrimack County Superior Court during expedited hearing on whether the recount in Manchester Ward 6 should continue after Mosely was the announced winner last week.

CONCORD – A judge will decide whether the Secretary of State can continue recounting Manchester Ward 6 House votes that appeared to wrest the 23-vote win from Republican Larry Gagne to Democrat Maxine Mosley during a recount last Monday by one vote.

Secretary of State David Scanlan posted Mosley as the winner after the recount, but later in the week said during reconciliation there appeared to be an administrative error and some uncounted votes so he would continue that recount Monday at 4 p.m.

Mosley and Senate Democratic Leader Donna Soucy filed a motion in court to stop any further recount, arguing through their attorney Bill Christie that the winner had already been announced and a second recount under these circumstances would be illegal.

“There’s no reconciliation process in a recount,” Christie told the judge.

He said the race has been declared and Scanlan no longer has jurisdiction.

Christie said: “They want to keep counting until a Republican wins.”

He said small variances are common. “You could count these ballots 10 times and I bet you’d come up with 10 different results.”

Christie said the variance needs to be greater than one percent to warrant a second recount and this one had a variance of only 0.5 percent.

Representing Scanlan, Deputy General Counsel Myles Matteson, head of the Attorney General’s Election Unit, told the judge there are new rules under the new attorney general and new laws to take into account.

Matteson said in his filing and in court:

“The very purpose of a recount is to ascertain the will of the people, to avoid voter disenfranchisement, and ensure that an unwarranted technicality does not destroy the process.”

Matteson said what the plaintiffs really want is for “this Court to disenfranchise New Hampshire voters in the name of ‘finality’ and ‘fair elections’ to preserve an administrative error in a recount rather than allow the process to continue to the required end of its constitutional obligation—identifying the winning candidate as determined by the will of the voters of Manchester Ward 6.”

Matteson said: “The obligation of election officials is to ensure that the will of the voters—as determined by the ballots cast—determines the winner of any election. Instead of seeking to vindicate the will of the Manchester Ward 6 voters, the Plaintiffs insist that the announcement of a vote tally, prior to completing the reconciliation of votes to verify that all were counted, constitutes an irreversible action to lock-in an incomplete count into a victory achieved by disenfranchisement.”

Attorney Rick Lehmann, representing Gagne, told the judge what really matters at the end of the day is that all of the votes are counted, urging that the recount continue.

Every seat counts as the final total could decide which party will control the House of Representatives during the next session.

The count appears to be 200 Republicans to 199 Democrats and one tie after recounts so far with more to come.

On Tuesday, a Coos County Republican House seat flipped to a Democratic one after recount and another House race ended in a tie.

For Coos County District 7, John Greer, the Republican, had election data totals of 2,447 votes over Democrat Eamon Kelley, 2,443, but the recount found Greer with 2,450 to Kelley’s 2,452, winning by two votes.

On Wednesday, the recount for a House seat in Rochester ended in a tie between incumbent Democrat Chuck Grassie and Republican David Walker.

Walker beat Grassie by one vote during the election for Rochester’s Ward 4, 971-970. After the recount, it was a tie at 970-970.
Democrats have been in the minority for the past two years, but had picked up seats during the midterm elections Nov. 8. Two years ago, Democrats were elected to 177 seats.