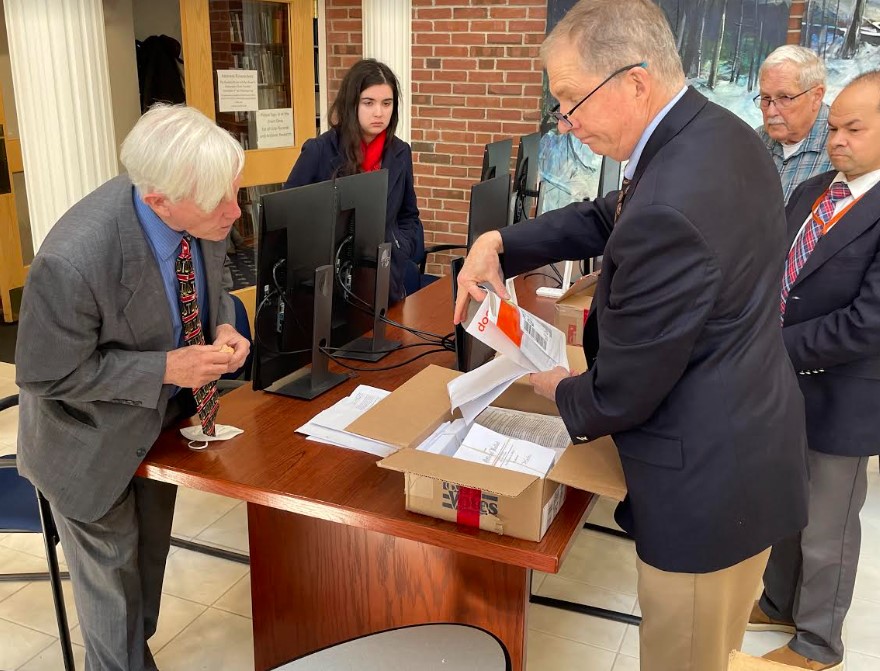 By PAULA TRACY, InDepthNH.org
CONCORD – Two Manchester Democrats are going to court to stop Secretary of State David Scanlan from further examining the ballots following the recount of a Manchester House of Representatives race that flipped one seat from red to blue.

They argue there is only one recount allowed and Scanlan has already declared Democrat Maxine Mosley the winner by one vote over Republican Larry Gagne in Hillsborough District 16 Ward 6.

In their filing in Merrimack County Superior Court, the Democrats are seeking an expedited hearing on the matter before 4 p.m. on Monday, the time Scanlan had set for a continued recount of Manchester’s votes in that race.

Scanlan said there appeared to be a discrepancy in the numbers that needed to be reconciled.

“Reconciliation revealed there is insufficient certainty that all ballots cast in that race have been recounted, necessitating further counting,” Scanlan wrote in a notice Thursday.

In its filings, attorney William Christie of Shaheen & Gordon, PA, writes that the recount of the recount would cause irreparable harm if the court did not intervene.

The suit states that the law only allows for a recount in certain cases and this case does not apply.
The suit seeks a preliminary and permanent injunction.

On another recount, Scanlan on Thursday said the Rockingham County District 6 House race in Brentwood would be looked at by the Ballot Law Commission because it appeared that some absentee ballots were not counted.

Meanwhile, the recount of 24 state House of Representatives continues with still seven races left to be recounted and the almost equal split remaining between Democrats and Republicans on who is to control the 400-member House for the next two years, with an advantage right now to the Republicans by one vote, and one race a toss-up with a tie.

There were no recounts either Thursday or Friday that changed the outcome of the election night winners, though some voting numbers changed slightly.

The recounts that began Monday will continue into Saturday and into next week at the State Archives in Concord.

On Monday, a Coos County House seat flipped from red to blue and one of the recounts found a tie during the recount. Right now, it appears the split is 199-201 favoring Republicans even if the Democrats are successful in their suit.
Democrats, which have been in the minority the past two years, had picked up seats, despite what they claim were efforts by Republicans to gerrymander them out. Two years ago, Democrats were elected to 177 seats.
The party in control at the beginning of each decade gets to decide the political boundary lines according to the latest U.S. census.

Anna Fay, spokesman for the Secretary of State’s office, said this is an unusual number of recount requests for a legislative election year, with 24 House seats, one state Senate and a Registry of Deeds office being inspected to ensure the count on election night identified the correct winner.

On Thursday, three Nashua seats were challenged. They were for Wards, 5, 1, and 9 where the Democrats won all but one of the total nine seats on election night. There was no change in the outcome of all three of those races during recounts.

On Friday, the counters and observers were focusing on three races, including two in Sullivan County and one in Merrimack County. The first one, for Sullivan District 8, which incorporates nine towns, had no material change in the winners but a few of the vote totals switched around.

This district includes voters in Acworth, Claremont, Croydon, Goshen, Langdon, Lempster, Springfield, Sunapee, and Washington. Before redistricting, the seat was held by Republican Walter Salisbury who did not run for reelection. There were two seats up for grabs thanks to redistricting.

The winners were Jonathan Stone, a Republican, and Hope Damon, a Democrat.
On election night, Damon was the top vote-getter among four candidates with 4,454 votes. Damon gained 12 votes during the recount with 4,466 votes. Stone received 4,436 votes in the election but the recount found him with 4,457.

It was close but Don Bettencourt had 4,433 at the election and in the recount so it was unchanged as were results for Robert Lovett Jr.’s count of 4,179.
The recount found Stone with 4,457 votes, Bettencourt with 4,443, Lovett with 4,179, and Damon with the same 4,466.
The toss-up for Rochester’s Ward 4 which ended in a tie at recount will either be decided by the Ballot Law Commission or a vote of the new House when it convenes.

On Friday afternoon counters completed results for a House seat in Merrimack District 5 which represents voters in Andover, Danbury, Hill, Salisbury and Webster. There were 37 votes separating the winner. There was no change but the votes were slightly different.

Louise Andrus, the Republican incumbent won one of two seats on the election last Tuesday with 1,989 votes which increased to 2,021 in the recount. She was followed in winning by Deborah Aylward, a Republican, who received an election day total of 1,778 which became 1,749 in the recount. After the election, there were only 37 votes more than Democrat Ken Wells with 1,741 and his recount total did not change. Lorna Carlisle, a Democrat, received 1,659 votes during the election but in the recount got 1,663.
And the recount was announced after 5 p.m. for another race which was close in Sullivan County District 5 which includes voters in Springfield and Sunapee.

There, the winner was a Democrat who beat the Republican by 30 votes. This was a district that was held previously by a Republican.

Democrat Linda Tanner won on election night with 1,392 votes over George Grant, a Republican with 1,362 votes.
On Saturday, recounts will be held for Hillsborough County District 12 and 2 which is Merrimack and Bedford, respectively. Next week, recounts will go forward on five more House races to represent Belknap District 6, Hillsborough 45, Coos 5, Merrimack 11, and Hillsborough District 35.

The final recount, which is expected to take two days because of the high number of ballots cast, will get counters working up to Thanksgiving day. That recount is for Hillsborough County Registry of Deeds.

Incumbent Mary Ann Crowell, a Democrat, won by 62 votes with 81,450 votes to Republican challenger Dennis Hogan with 81,388 votes on election night.
To keep up with recount results, visit:
https://www.sos.nh.gov/sites/g/files/ehbemt561/files/2022-11/general-election-recount-schedule_11.pdf