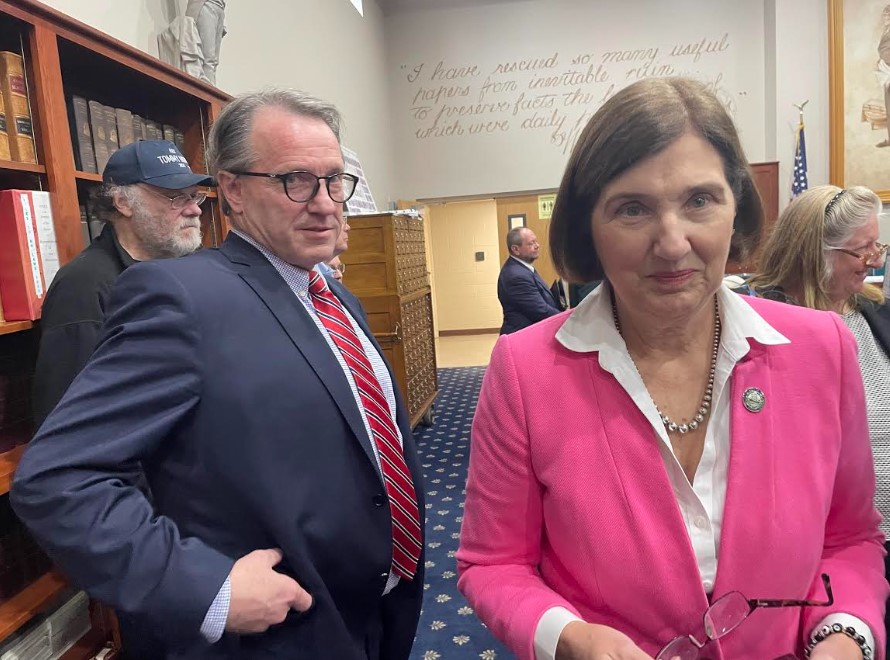 By PAULA TRACY
CONCORD – Recounts for 24 House of Representatives seats are underway for a fourth day Thursday after some surprises this week that have helped Democrats.
Two seats, one from Coos County and the other in Manchester, were flipped from red to blue in a recount, and on Wednesday, the recount for a House seat in Rochester ended in a tie between incumbent Democrat Chuck Grassie and Republican David Walker.

Walker beat Grassie by one vote during the election for Rochester’s Ward 4, 971-970.
After the recount, it was a tie at 970-970.
It will go before the state’s Ballot Law Commission if either candidate requests it and if it is still a tie after that review or if neither candidate requests the BLC determination, the House of Representatives will decide who won the seat.
Secretary of State David Scanlan said there are challenge ballots indicating it is likely to go to the Ballot Law Commission at least first.

The recount of 24 house seats is now at a halfway point.
Before the Walker-Grassie recount, which held that the Republican was the winner, the count was 199-201 favoring Republicans.
Barring a change in results when the Ballot Law Commission reviews the contested ballots on November 28, the full House of Representatives will vote to determine the fate of the seat when it meets on December 7.
OTHER RECOUNTS WEDNESDAY YIELDED NO CHANGE
There were three other races recounted Wednesday.
One involved a race in Rochester’s Ward 6 where there were six votes between winner and loser on election night.
Brandon Phinney, a Republican who had previously been a Libertarian in the 2016 election won over Democrat Nevin Dexter 887 to 871 on election night last week. The results were unchanged after the recount with Dexter gaining one seat 887-872.

In another recount, Wednesday for Strafford County District 4, comprising Barrington and Strafford, the outcome of the election was unchanged though there were some slight differences in vote totals.
Incumbent Republican Kurt Wuelper, a Republican lost his seat with 3,127 votes, a count unchanged by the recount.
Elected were three: incumbent Republican Leon Turcotte of Barrington with 3,283 (he picked up two votes in a recount) Heath Howard of Strafford, a Democrat with 3,243 votes (picking up three votes), and Cassandra Levesque, a Barrington Democrat with 3,363 votes (adding another vote from election night.)
Challengers Matthew Towne, a Democrat ended up with the same number of votes, 3,235, and Davis Miller, a Republican saw his vote total drop by two votes to 3,052.
In the afternoon the counters and observers focused on Hillsborough District 29 which includes Goffstown and Strafford County District 9 which is Rochester’s Ward 6.

There were four winners in Goffstown election night – three Republicans and one Democrat – including incumbent Republicans Fred Plett and Joe Alxander, Jr. Plett received 3,531 votes and Alexander, 3,589. Sheila Seidel, a Republican also won with 3,510 votes, and Democrat Judi Lanza with 3,443. Not making the list of winners were Democrat Dian McCarthy with 3,357 votes Democrat Melanie Renfrew-Hebert with 3,273 votes, Doug Pounds, a Republican with 3,436, and Curt DeVetter with 3,010. The recount found the same winners but with a few votes total changes.
UP THURSDAY
On Thursday, the recount schedule has five races to tabulate, mostly related to votes in Nashua.
They are for Hillsborough County District 42 which includes Lyndeborough, Mont Vernon, and New Boston, Hillsborough; District 9 (Nashua Ward 5); Hillsborough District 5 (Nashua Ward 1); Hillsborough District 10 (Nashua Ward 9); and one for Pembroke, Merrimack District 12.

In the Hillsborough County race, Republicans won all three available seats but only three votes separated Republican incumbent Keith Ammon with 2,639 and challenger, Democrat Karen Roach with 2,636 votes.
Winning, along with Ammon election night were incumbents Griffin with 2,648 votes and fellow Republican Lisa Post with 2,684 votes. Democrats Richard Backus and Brian Paquette received 2,592 and 2,590 votes respectively on election night.
The recount in Merrimack District 12 is for two seats from Pembroke.
Incumbent Dianne Schuett, the Democrat was the top vote-getter on election night with 1,677 votes while Brian Seaworth, a Republican incumbent had the second-highest at 1,543. Maurice Regan, a Democrat received 1,498 votes, and Nick White, a Republican received 1,372 on election night.
To keep up with the recount schedule and the results visit https://www.sos.nh.gov/sites/g/files/ehbemt561/files/2022-11/general-election-recount-schedule_3.pdf