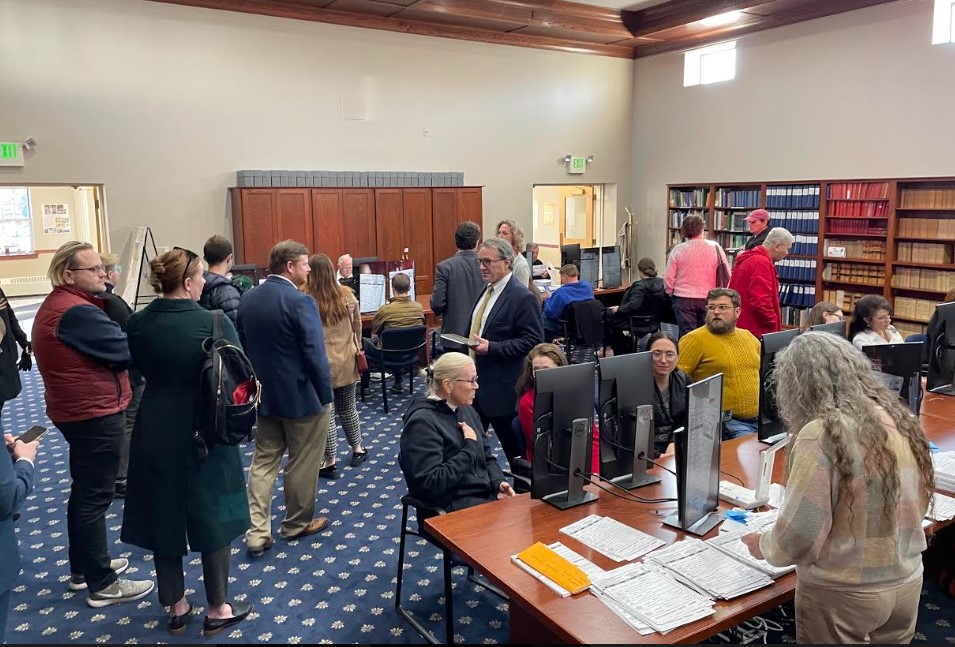 Recounts got underway Monday at the state archives in Concord

CONCORD – Recounts began for an almost equally divided legislature in New Hampshire on Monday and in one case, an election flipped from a Republican to a Democrat in Manchester’s Ward 6 based on a single vote.

That takes the New Hampshire House divided at 202-198 in favor of the Republicans, with Democrats gaining 11 seats from the past two years.

But that count can change with these recounts this week.

More than 80 people came to the state archives Monday to watch recounts in the first four contested elections for House races to represent Brentwood, Boscawen, Epsom and Manchester’s Ward 6.

In the case of the latter, election day totals were changed by the recount with Larry Gagne, a Republican who initially won, losing to Maxine Mosley, a Democrat.

The recount showed Infantine still winning but with 1,877 votes; Gagne dropping to 1,798, Mosley gaining just two votes to 1,799 and Hillhouse losing one vote to 1,643.

MORE RECOUNTS
The deadline for seeking a recount was 5 p.m. Monday and by 1 p.m. the number of requests had gone from 16 House races to 23 with two state Senate requests and one for Hillsborough County Registry of Deeds, said Patty Lovejoy, senior Deputy Secretary of State.
The process, which involves hand counts of all ballots with public observers, was at first expected to go through Friday but now appears likely to continue into early next week, Lovejoy said.
In the first two races recounted, Secretary of State David Scanlan said there was no change in the outcome from the election and very few changes in vote numbers.

The master tally showed that the election day total for the Boscawen race changed by one vote more for Republican Rick Devoid going from 729 to 730 and the same number of votes for Lorrie Carrie, the Democrat at 752. Carrie won and that was unchanged from last Tuesday.

In the afternoon, both Republican incumbent Melissa Litchfield and Democrat Eric Turer were present to watch the recount of their election results for Brentwood. Turer won 1,214 over Litchfield’s 1,198 on election day. Turer flipped Brentwood from red to blue by defeating Litchfield.

Senate District 24, held by Democrat Dr. Thomas Sherman of Rye, who ran unsuccessfully for governor was won last Tuesday by Democrat Debra Altschiller over Republican Lou Gargiulo 17,969 to 14,313. That is a difference of 3,656 votes. The district includes the communities of Exeter, Greenland, Hampton, North Hampton, Hampton Falls, Rye, and Stratham.

Senate District 12 will also now see a recount.
It was won Nov. 8 by Republican incumbent Kevin Avard 14,314 to Democrat Melanie Levesque, who had previously held the post two years ago, with 13,626 votes, a difference of 688 votes.

‘A GOOD DAY FOR DEMOCRACY’

Scanlan reported there were 626,823 ballots cast last week including 58,567 absentee votes, the highest ever for a midterm election, with the past record set four years ago.

“Any election where we break voter turnout records is a good day for democracy in New Hampshire and America,” Scanlan said.

NEXT UP
Also, this week will be recounts for House races for Rockingham District 1 (Northwood and Nottingham) Coos County District 7 (Berlin, Carroll, Jefferson, Kilkenney and Whitefield) Grafton District 18 (Alexandria, Bridgewater, Bristol, Canaan, Dorchester, Enfield, Grafton, Groton, Hebron, and Orange) Grafton District 7 (Campton) on Tuesday then, on Wednesday, Strafford District 4 (Barrington and Strafford), Hillsborough 29 (Goffstown) and Strafford District 9 (Rochester Ward 6).
On Thursday there will be two recounts planned for Hillsborough District 42 (Lyndeborough, Mont Vernon, and New Boston) and Merrimack District 12 (Pembroke) while on Friday, another two recounts are planned for Sullivan District 8 (Acworth, Claremont, Croydon, Goshen, Langdon, Lempster, Springfield, Sunapee, and Washington) and in the afternoon a recount for Sullivan District 5 (Springfield and Sunapee).
The schedule may change as more recounts are placed into the queue.

CORRECTION FOR COOS COUNTY
Following General Election night, the Secretary of State’s Office originally reported that US Senate candidate Maggie Hassan received 1,106 votes in the town of Columbia, Coos County based on information submitted on the official “Return of Votes” form. The reported number far exceeded the number of ballots actually cast in the town. The Secretary of State has confirmed with the town clerk of Columbia that Senator Hassan only received 106 votes on election night. The original figure entered was a simple typo.