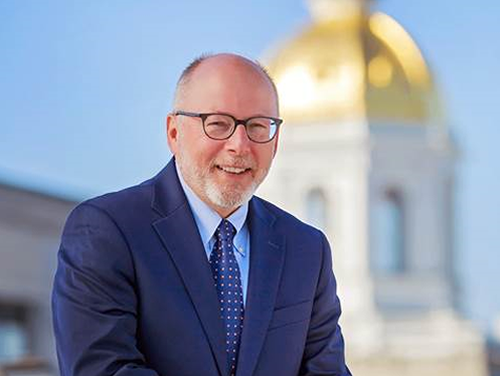 Andru Volinsky filed the latest education funding lawsuit and the last one more than 20 years ago.

CONCORD — The superior court judge hearing the latest education funding lawsuit against the state has recused himself from the case.

Justice Lawrence MacLeod said Wednesday it was not apparent to him that he could have a potential or perceived conflict until after a hearing Friday on the plaintiffs’ request for an injunction to block the state from setting the rate for the Statewide Education Property Tax.

The plaintiffs claim the tax is unconstitutional because it is not assessed in a proportional and reasonable manner, meaning their are different rates for different communities which would be unconstitutional.

The statewide tax raises $363 million annually, which is 30 percent of state’s obligation to education aid.

In his recusal order, he notes he was not aware the City of Lebanon was a member of the Coalition Communities seeking to intervene in the case.

The group is composed of communities who are allowed to retain money raised under the statewide property tax that is more than needed to provide the adequate education aid to the community.

Property wealthy communities raise more than necessary to fund the adequate education grants from the state property tax and the communities are allowed to retain the extra money rather than sending it to the state.

Other property wealthy communities set their education property tax rate in negative numbers in order to avoid paying the statewide tax at all.

MacLeod said he and his wife own property, one residence, two rental properties and two undeveloped lots with a combined property assessment of more than $1 million and may be impacted by the plaintiffs’ motion.

“Assuming, without deciding, if the Plaintiffs’ lawsuit has merit, it appears the undersigned justice and his spouse may enjoy a tax advantage under New Hampshire’s existing taxation structure  given the assessed values and the fortuitous location of their real properties not available to the plaintiffs’s and other real property owners similarly situated,” MacLeod wrote in his order, “such that the undersigned and his spouse would or could be placed a de minimus economic disadvantage if the plaintiffs were to prevail in this case.”

Even is there is no real conflict in this case, his impartiality could be questioned if he continued to preside in the case, he said.

He apologized for any delay his recusal may cause.

The suit was brought by several residential and commercial property owners claiming the current system uses property taxes of widely varying rates — which the state Supreme Court has already ruled unconstitutional — to fund the majority of the cost of public education.

The plaintiffs filed a motion last month asking the court to block the state from setting the rate for the Statewide Education Property Tax (SWEPT) or to set it at $0. The hearing was held last week.

One of the attorneys for the plaintiffs said the judge’s decision will delay the suit and leaves open who will be the new judge to hear the case.

“We are disappointed that Judge MacLeod thought it was necessary to rescue himself, it is not a decision we can question,” said attorney Andru Volinsky. “The question we have is who steps in now and gets us back on track so 90 percent of the property taxpayers in New Hampshire are not disadvantaged.

“We all know justice delayed is justice denied and that is precisely the case here.”

The plaintiffs’ attorneys, Volinsky, John Tobin and Natalie Laflamme, said in the motion to stop setting the rate, the state continues to ignore the New Hampshire Supreme Court by using varying rates for the statewide property tax, which hurts communities with lower property values.

“Ever since (Claremont II,) the State has tried numerous mechanisms to avoid implementing an equitable tax system that would have the effect of imposing a fairer tax burden on wealthier towns, requiring the courts to intervene and protect the constitutional rights of New Hampshire citizens.

“Now, the State is primed to once again impose a tax using the same mechanisms previously held unconstitutional that will result in some taxpayers paying up to seven times as much for education funding as their wealthier counterparts,” the attorneys wrote in their motion to the court.

Since 2011, the wealthy communities have been allowed to retain the extra money raised through the tax, which in essence lowers their rates.

“The SWEPT tax as currently administered is not uniform in rate as the State allows towns with surplus SWEPT funds to either set a negative local education tax rate to offset the State’s official equalized SWEPT tax rate or retain the excess,” the motion states. “Both of these mechanisms have been previously deemed unconstitutional by New Hampshire courts.”

The Department of Revenue Administration sets property tax rates in the fall for collections due in December and has begun that work. About 40 communities in the state are allowed either to keep excess revenue from the SWEPT or set negative rates.

The Supreme Court decisions in the original Claremont education lawsuit, clearly left it to the legislature to fix the inadequacies and unconstitutional issues in the system, but to date the legislature has failed to address the key findings of the court.

The ConVal Regional School Districts and others sued the state claiming the state’s per-pupil, adequate education rate is too low and does not cover most school education costs.

The original Claremont decision found the state has an obligation to provide each student with an adequate education and to pay for it.

The state’s current rate is $3,636 per student and Superior Court Judge David Ruoff sided with the districts but declined to set a higher rate.

The Supreme Court generally agreed but sent the case back to Ruoff telling the plaintiffs to present their actual costs and why such items as transportation and capital costs should be included in the rate, which are not included under the current system.

That case is before Rockingham County Superior Court with a trial set for next year.