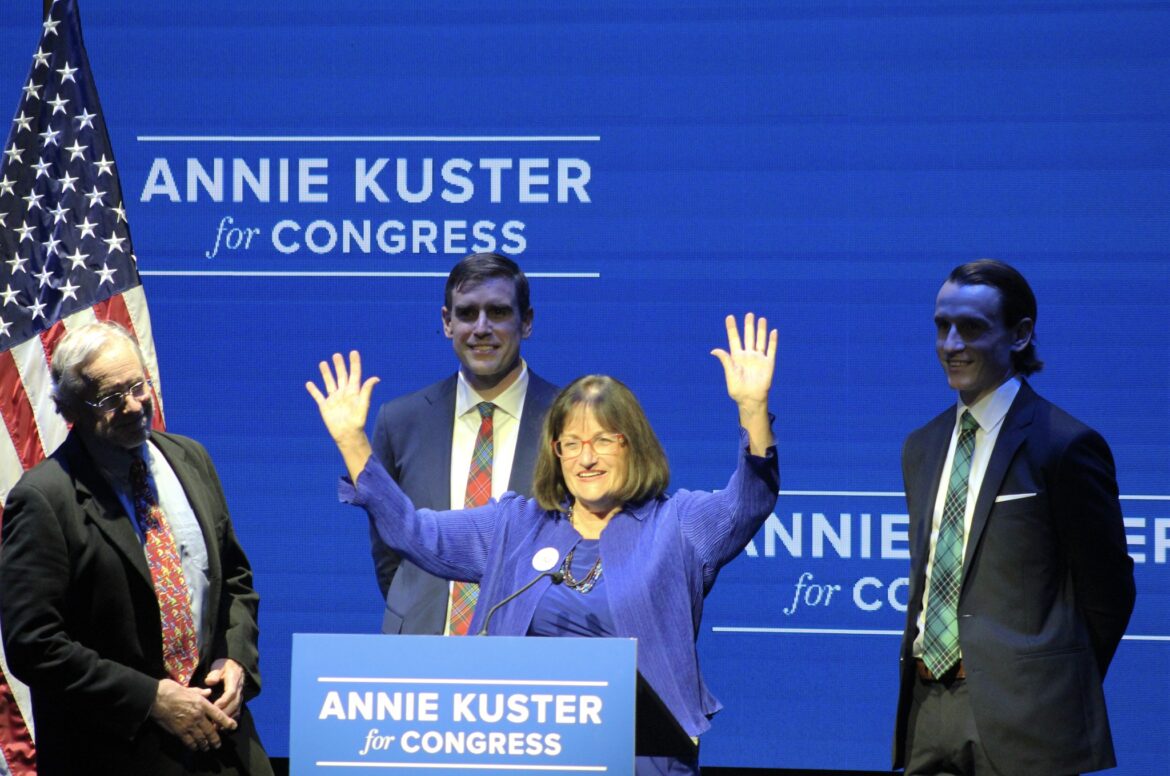 The voters jumped around between support for Republicans and Democrats but seemed to reject the hard-right candidates endorsed by former President Donald Trump.

With a few state House races still to be counted and some recounts expected, it appeared Democrats added more seats in the House and were nearing having half, with about 199 seats for Democrats and three seats still not called.
The margin of Republicans to Democrats in the Senate remains though some of the faces have changed.

U.S. SENATE
The big race between incumbent Democratic U.S. Senator Maggie Hassan and Republican Donald Bolduc was not at all as close as pollsters had predicted.

Hassan’s lead widened to almost 10 points as votes were still being counted Wednesday afternoon.
Bolduc, a retired general and Trump supporter, could have pulled it off if he had not changed his mind on being an election denier, Trump said on social media.

“Don Bolduc was a very nice guy, but he lost tonight when he disavowed, after his big primary win, his long-standing stance on Election Fraud in the 2020 Presidential Primary…Had he stayed strong and true, he would have won, easily,” Trump wrote on his social-media platform, Truth Social, Tuesday night.

In August, Bolduc explained during a debate: “I signed a letter with 120 other generals and admirals saying that Donald Trump won the election and, damn it, I stand by [it].”

When Bolduc won the Republican primary over New Hampshire Senate President Chuck Morse, R-Salem, he reversed course on the “big lie” saying that after researching the subject, he realized the true winner was Democrat Joe Biden.

PAPPAS BEATS LEAVITT EASILY
Another of the pollster’s supposed “too close to call” races ended up with at least an 8-point gap between incumbent Democrat Congressman Chris Pappas who beat political newcomer and hard right Trump supporter Karoline Leavitt for the First Congressional District.

As the final votes were still being counted at 2:30 p.m. Wednesday Pappas had 53 percent of the vote over Leavitt’s 46 percent.

On Facebook, Wednesday, Leavitt wrote that while “we certainly did not get the results we hoped or worked for,” she was grateful to supporters and wished Pappas the best.
“I hope he will do what’s best for hardworking families like his and mine” and she said she considers New Hampshire home and will “always fight for it.”

KUSTER DEFEATS BURNS
District 2 Congressional incumbent Annie Kuster, a Democrat, won over Trump supporter Robert Burns. At 91 percent of the votes reporting in, Kuster had a lead of 56.6 percent to Burns’ 43.4 percent.

“I look forward to serving our state for two more years and working hard to lower costs, keep families safe, and protect our personal freedoms. “Together, we can build a brighter future for all here in New Hampshire. Let’s get to work!” she said in a statement Wednesday to InDepthNH.org.

POSSIBLE HISTORIC TURNOUT AND WEBSITE
The new Secretary of State David Scanlan predicted that the turnout would be the largest in state history for a midterm but it remains to be seen if that is true. The current record is about 580,000 voters who cast ballots in 2018.
Likely, we will not know until the end of the week, his spokesman said.
When they are all completed, the public can access the full results of Tuesday’s election here https://www.sos.nh.gov/elections/elections/election-results

DEMOCRATS, CHOICE ADVOCATES REACT
New Hampshire Democratic Party Chairman Ray Buckley said the turnout in New Hampshire was tremendous and that the voters spoke clearly about their priorities.
“While we are still waiting on results from our down-ballot races, what is clear is that Democrats have held our full Democratic federal delegation with incredible turnout amid an unfavorable national environment. New Hampshire voters sent a strong message that Democrats are trusted by hard-working Granite Staters to carry out their priorities of lowering costs, protecting abortion rights, and supporting our public schools and teachers,” Buckley said.

Now a lot of the political focus in the state will be on whether the state retains its first-in-the-nation status for the next presidential primary.
President Joe Biden suggested the Democratic Party hold off any decision until after the mid-term election. A meeting of the Democratic National Committee is expected in December.

Abortion rights leaders said voters sent a resounding message to lawmakers on Tuesday but there is still a lot of work to do, particularly as it relates to getting the Republican-backed Executive Council to support contracts to reproductive clinics and for sex education for at-risk youths in Claremont and Manchester.

Incumbent Republicans Joe Kenney and David Wheeler were still locked in tight races with no results yet called at 3 p.m. although they both had slight advantages over their Democratic rivals.

“While we await final results in state races, what we know is that in the shadow of a Supreme Court decision to overturn Roe v. Wade and the passage of New Hampshire’s first abortion ban in modern history, Granite Staters took to the polls to say, ‘We won’t go back!'” said Kayla Montgomery, Vice President of Public Affairs for Planned Parenthood New Hampshire Action Fund.

“Anti-abortion majorities were re-elected to the New Hampshire Executive Council and state Senate. While Sununu recently said ‘here in New Hampshire, we’re not changing anything regarding abortion access, he made the same promise after he was elected in 2020 – yet eight months later he signed an abortion ban into law,” Montgomery said.