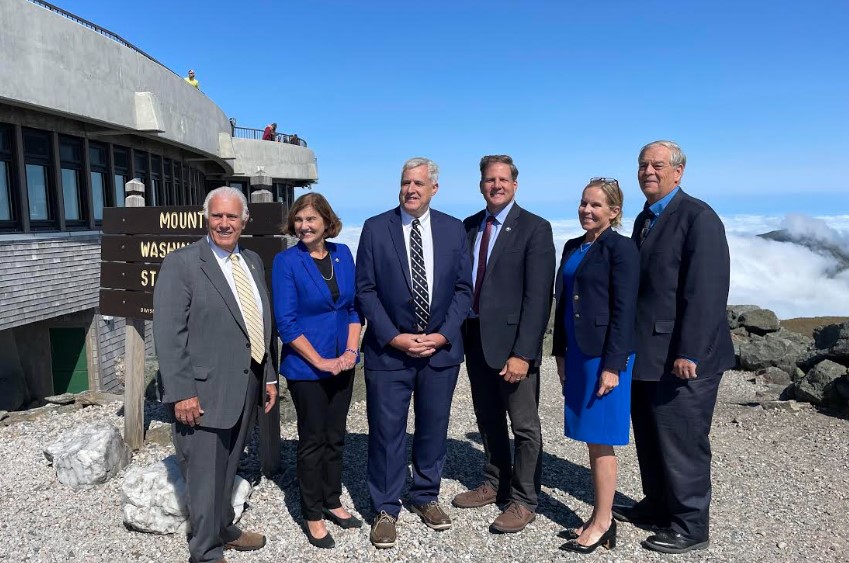 They're all back after Tuesday's election. The Governor and Executive Council met at the top of Mount Washington on Sept. 7. From left are: Executive Councilors Ted Gatsas, Cinde Warmington, Joe Kenney, Gov. Chris Sununu, Councilors Janet Stevens and David Wheeler. All were re-elected Tuesday.

CONCORD — The five executive councilors won re-election Tuesday and the partisan makeup of the Senate did not change although some of the faces will.

Several of the Executive Council members had close races that were not determined until Wednesday but the results are the same as they were two years ago with a 4 to 1 GOP controlled council.

The council districts were gerrymandered 10 years ago to favor Republicans and this session’s redrawing of the political boundaries of the five districts further favored Republicans.

In the 1st District, incumbent Joe Kenney, R-Wakefield, survived a strong challenge from Somersworth Mayor Dana Hilliard in the redrawn district that removed the Upper Valley and instead now includes areas as far south as Dover and Durham.

The 2nd District incumbent Cinde Warmington, D-Concord, had little trouble defeating her Republican challenger, former state Sen. Harold French. The district changed from a line across the state to include the Upper Valley area as well as other college towns such as New London and Plymouth and most of Southwest New Hampshire.

In the 4th District Republican incumbent Ted Gatsas of Manchester won over Democratic former state Sen. Kevin Cavanaugh of Manchester in what appeared to be a very close race when results began coming in Tuesday evening, but was a comfortable win for Gatsas by the time the votes were counted.

The 5th District pitted Republican incumbent David Wheeler of Milford, against Nashua Alderman Shoshanna Kelly, but Wheeler won by about 4 percent of the vote in the district which is much more Republican after the redistricting process.

After the races were determined Warmington lamented the gerrymandering that makes it difficult for Democrats to win in four of the five districts.

“Our outstanding candidates ran the best races possible, but unfortunately couldn’t overcome the effects of deeply gerrymandered districts,” Warmington said. “As a team, we have talked to tens of thousands of voters and have started laying the groundwork for a Democratic majority in 2024.”

While the partisan divide of 14-10 has not changed in the Senate from the current term, eight senators decided not to run again and one lost his seat in Tuesday’s election.

Senate Finance Committee Chair Sen. Gary Daniels, R-Milford, was defeated by Democrat Shannon Chandley of Amherst, who had defeated Daniels in the 2018 election, but lost to him in the 2020 election

The other seat to switch parties was District 16 now held by Democrat Kevin Cavanaugh of Manchester who ran for the Executive Council after the district was redrawn to make it much more Republican.

The seat was won by former House member and restaurant owner Keith Murphy, R-Bedford, who will be the first member of the Free State Project elected to the Senate.

He won a fairly tight race against Democrat June Trisciani of Manchester.

They will be joined in the Senate by Republicans Carrie Gendreau, Timothy Lang, Daniel Innis, Harold Pearl and Daryl Abbas, and Democrats Donovan Fenton and Debra Altschiller.

The Senate caucuses will meet later this month to choose their leaders, expected to be Bradley for the Republicans and Soucy for the Democrats before electing the Senate President Dec. 7 on Organization Day.