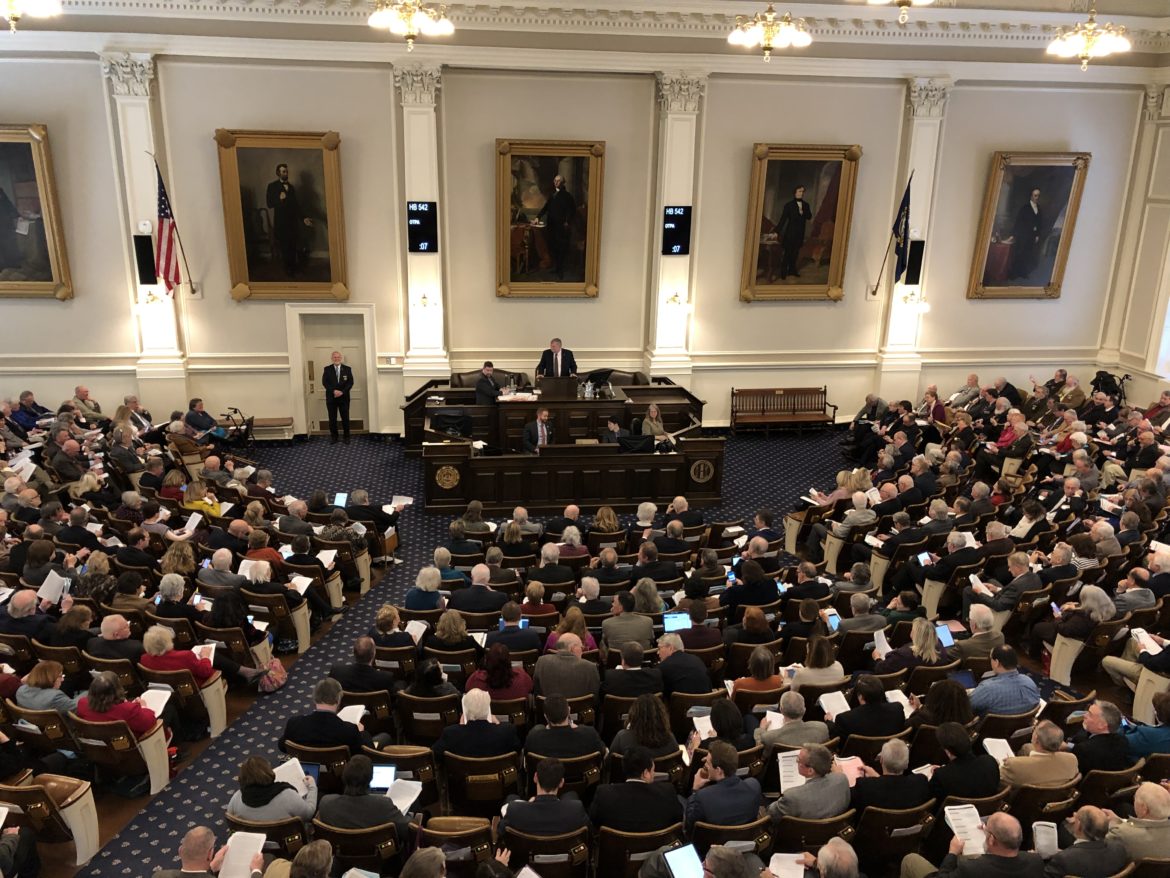 NH House session in Representatives Hall at the State House in this 2019 photo.

CONCORD — “Tired of Waiting” should be the theme song for political leaders in New Hampshire and in Washington D.C. as control of both Houses is up for grabs the day after the general election.

The New Hampshire House which is close to if not even and who controls the majority will not be known until recounts of close races are done next week.

In mid-afternoon Wednesday, House Clerk Paul Smith said his office is waiting for the results from one town before releasing the unofficial results, which he noted earlier could be 200-200.

Late in the afternoon he posted the unofficial make up was 203 Republicans and 197 Democrats.

The current partisan makeup of the House is 202 Republicans and 178 Democrats with 20 vacancies.

The current House partisan divide is one of the closest in some time, but the one to be sworn in Dec. 7 will be even closer.

Democrats picked up some seats in counties that are strong GOP strongholds such as Belknap and Carroll counties.

Currently there are no Democrats on what has been the controversial Belknap delegation which has generated headlines over its handling of the Gunstock Recreation Area Commission as well as the county nursing home and sheriff’s department.

Several of the representatives driving the push to privatize or lease the area were defeated in the Republican primary and two Democrats broke through Tuesday in the general election.

Democrats also picked up a couple of seats in heavily Republican Carroll County and in the process sent current House Finance Committee Chair Karen Umberger of Kearsarge to the sidelines along with former House Speaker Gene Chandler of Bartlett who was seeking a House seat after taking the last term off.

Two Democrats will continue to represent Bedford, once only a Republican club for House members, and they swept the two Amherst seats for the first time in anyone’s memory.

However, Republicans maintained their edge in Hillsborough and Rockingham counties, even though Democrats once again won all the House seats in Nashua.

Merrimack county was a mixed bag but Democrats appeared to retain their majority as they did in Cheshire and Grafton counties.

Sullivan County was also a mixed bag with Republicans winning all the seats in Newport, while Democrats won enough seats in Claremont to remain in contention for county control.

Tuesday’s election was similar to one a decade ago, when Bill O’Brien was House Speaker and Republicans had veto-proof control of both the House and the Senate.

However, the House created a number of controversies from wanting to criminalize TSA agents at airports for searches and greater restrictions on voting and abortion rights.

The voters had enough 10 years ago and put Democrats in charge of the House in the 2012 election.

While the final outcome is to be determined next week, voters indicated they seek a more moderate legislature than the one holding office the past two years.