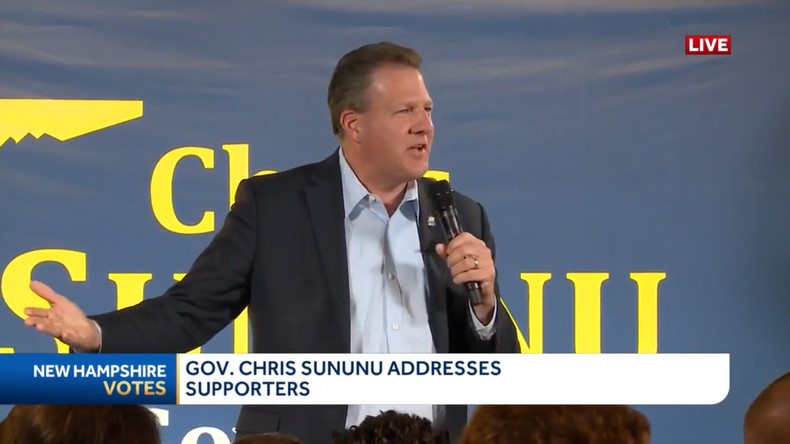 Republican Gov. Chris Sununu said it’s not about him but about the people of New Hampshire as he spoke to supporters after ABC News and the Associated Press called the race for him over Democratic challenger Dr. Tom Sherman of Rye at 8:30 p.m. Tuesday night.

“This is a good night and a great place to be,” Sununu said, securing a fourth term in the corner office.

“This has to be a night of unselfish gratitude,” Sununu said winning 52 percent to 47 percent of the vote with 18 percent reporting when the race was called.

“I was born election night in 1974 number 7 of 8,” Sununu said telling the story of how his father former Gov. John Sununu rushed back to New Hampshire from a Boston hospital where his wife was to give birth to turn in their absentee ballots.

“My favorite part of this campaign was meeting incredible people across the state who are fighting every day to make New Hampshire a better place,” Sherman said. “I ran for governor to help small businesses that are trying to expand, young families that can’t find housing, and women like Lisa Akey, who had to testify from her hospital bed because of the abortion ban Sununu signed.

“While these aren’t the results that we hoped for, I’m so incredibly grateful for the support of Granite Staters who believe we need to put people above politics. I wish Governor Sununu well over the next two years, as well as everyone who was elected tonight to serve our great state,” Sherman said.

While it looked like a positive night for Democrats in major races, the experts anticipated a long night before the winners finally emerge.

No other races have been called as of 10:15 p.m. InDepthNH.org will have full coverage Wednesday.

At about 10 p.m. Tuesday, Democratic U.S. Senator Maggie Hassan had 56 percent of the vote ahead of Republican challenger Don Bolduc at 42 percent with 29 percent reporting.

Democratic Congressman Chris Pappas had 57 of the vote, Republican Karoline Leavitt 43 percent with 38 percent of the vote counted.