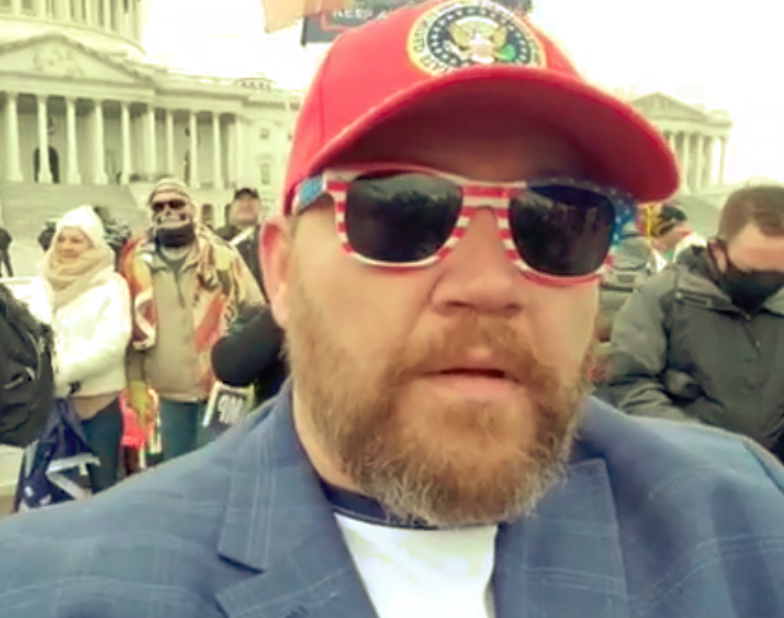 Jeremy Herrell, the self-styled Hip Hop Patriot who is running as a GOP candidate for a seat in the New Hampshire House, says he was not arrested by the Vermont and New Hampshire Drug Task Forces, and that he did not become an informant in a subsequent cocaine trafficking case, despite the court records and booking sheet obtained by this reporter.

The already controversial Herrell operates as a far-right political pundit who distributes a podcast and makes frequent Facebook videos. He asks his fans for donations so that he can buy clothing for his appearances and equipment for his podcast studio.

In his videos Herrell has trafficked in conspiracy theories, about things like the recent attack on Speaker of the House Nancy Pelosi’s husband, Paul Pelosi, as well as lies about the 2020 presidential election. At one point, Herrell claimed the Chinese Government offered President Joe Biden 250,000 troops to assist with the possible civil unrest during the presidential transition.

Herrell took part in the election protests on Jan. 6 led by President Donald Trump, claiming he was part of a team briefed on serving as a citizen’s grand jury that was coordinating with the Trump team about the protests that later turned into the insurrectionist riot at the Capitol.

“We were getting real time information from people at the White House about when Trump was going to speak,” Herrell said.

Herrell said the citizen’s grand jury would be able to indict, try, and sentence people for allegedly violating the Constitution by formally accepting the vote totals that certified Biden as president.

“We have the power to do all those things to do what they do in court,” Herrell said.

Herrell claims that he left Washington D.C. before the protest turned violent.

Before he turned to politics, Herrell admits he had a checkered past that included run-ins with the law when he was younger. But he has not made the extent of his legal issues clear to his fans. According to court records, a man named Jeremy Herrell from West Lebanon, New Hampshire cooperated with police as a confidential informant and bought cocaine from the Massachusetts trafficker he used as a supplier.

“On September 26, 2007, the New Hampshire drug task force (drug task force), in conjunction with the Vermont drug task force, arrested Jeremy Herrell for sale of a controlled drug and conspiracy. Herrell agreed to cooperate with police by providing them with his customer list and orchestrating several reverse drug buys. He also identified the defendant (Rafael Torres) as his supplier,” according to a ruling in Torres’ later appeal.

When asked this summer about the appeal ruling, Herrell denied he was the man named as the informant.

“No, that is not me. I am very open with my childhood full of troubles when I was a kid in the State of Illinois. I speak on that all the time as motivation for people to not make the mistakes I did and since my journey with Jesus in 2016, I really enjoy letting people with troubles know there is a way out! With or without God, there is a way although with God is a lot better. I have had people send me this information before and I don’t know what it’s all about,” Herrell wrote in a July email asking about the court records.

Herrell stopped responding after this reporter obtained the booking sheet for the Sept. 26, 2007, arrest referenced in the appeal’s statement of facts. The mugshot of the Jeremy Herrell in the 2007 arrest appears to be a younger version of the Hip Hop Patriot, and other biographical information listed on the booking sheet matches Herrell’s current information.

Herrell was supplied a copy of the booking sheet, but he did not respond to multiple requests for comment about the arrest.

According to the appeal ruling, Herrell told police he bought three kilos worth of cocaine from Torres in the three months before his arrest.

Herrell moved to Claremont in 2009 and his time in the limelight started after Trump’s election when he put out the songs “Build the Wall” and “MAGAlikeamofo.” Herrell was also a featured performer at a so-called free speech rally held in Boston in 2017. The event was considered a right-wing gathering and included figures associated with the racist group the Proud Boys, such as Augustus Invictus.

In 2019, Herrell was part of a social media incident in which he and Claremont City Counselor Jon Stone reportedly harassed a local couple who had complained about the city’s Christmas decorations. Stone is also running for a State House seat on the GOP ticket.