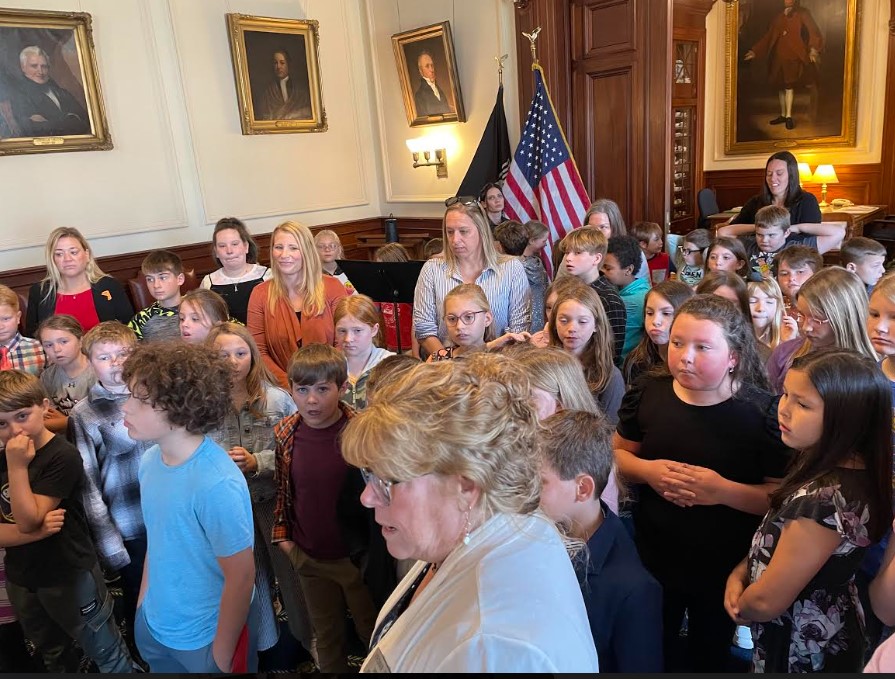 Elementary school students from Laconia are pictured at the Governor and Executive Council Meeting Wednesday.

By PAULA TRACY, InDepthNH.org
CONCORD – The state’s Executive Council approved 30 new housing projects from Berlin to Troy which will allow developers to build 1,472 units of housing, including 918 affordable units in the next 18 months using $50 million in federal COVID-19 relief funds.

The council also approved a contract to insure over 88,000 adult residents on Medicaid with dental coverage.

Councilors discussed staffing problems related to the care of children at the Sununu Youth Services Center in Manchester and for the fourth time since September, the Republican-controlled council was asked and also failed to approve a sex education program for at-risk youths in Claremont and Manchester, despite efforts by Executive Councilor Cinde Warmington, the lone Democrat, to take it off the table and make those programs available.

The contracts with two providers remain on the table and Gov. Chris Sununu said he does not know what he can do or say to convince the majority of Republican councilors that this program requires parental permission and is needed to prevent unplanned pregnancies among youths.

Republican Executive Council members Joe Kenney, Ted Gatsas, and Dave Wheeler, and this time, Janet Stevens, joined them by refusing to take the contract off the table. Stevens had previously voted to remove the item from the table after questioning Commissioner of Health and Human Services Lori Shibinette, who confirmed the program is for “vulnerable populations. We’re talking about kids in foster care, kids that have been trafficked. Kids that have already had a baby trying to prevent a second pregnancy.”

Liz Canada, advocacy manager for PPNNE/Planned Parenthood New Hampshire Action Fund, said after the vote, “time and again over the last two years, the majority of New Hampshire’s Executive Council has ignored our state’s public health officials’ recommendations to put their personal anti-abortion politics before the health and wellbeing of their constituents.

“By gutting the family planning program and rejecting routine funding for after-school sex education, the Executive Council has jeopardized New Hampshire’s capacity to reduce rates of unintended pregnancy and sexually transmitted diseases in our state at a time when the landscape of reproductive health care nationwide is in chaos because of the Supreme Court’s decision to overturn Roe v. Wade.”

INVEST NH CAPITAL GRANT PROGRAM RECIPIENTS
Sununu’s plan to spend $100 million in federal American Rescue Plan Act funds to address the state’s housing crisis came to a critical vote Wednesday.
The council unanimously passed $50 million in forgivable loans to 30 developers who will be required to rent an agreed-upon number of units at gross rents (rent plus utilities) to those making 80 percent or below the Area Median Income for a minimum of five years.

The programs approved through a competitive process involving 113 applicants include many existing community structures like old mills and empty school buildings to create housing.
The state has less than 1 percent of its housing stock available for prospective tenants and that is impacting businesses’ ability to attract workers.

While there are some concerns that developers will just turn those into market-rate units after five years, the governor noted in a press conference following the vote that 86 percent of the contracts for low-income units are for longer than five years.

He said the state received applications totaling $153 million in requests for the $50 million available. His staff reviewed and approved the projects and also looked geographically for diversity.
It includes projects ranging in size from four units at the Hillwinds in Franconia to 224 units at the Gateway at Exeter with 56 of those units being reserved for affordable housing.

Also approved were projects in Franklin for the Stevens Mill, in Newport for the Dexter Richards and Sons Woolen Mill, a 48-unit project on Sheep Davis Road in Concord, the Brown School in Berlin, and Visions Hanover.
The cap cost per unit was $330,000 and Gatsas asked if that is affordable. He was told that was maximum and many were lower but the cost of housing has skyrocketed and interest rates have gone from about 3 percent to 7 percent in less than two years.

As part of the $100 million InvestNH Initiative, $10 million is going out to the NH Housing Finance Authority for their capital investments in low-income housing tax credit projects and the remainder will go out to provide municipalities funding to help them accommodate more low-income housing.

Kenney thanked the staff noting that in his district, which includes the North Country, there are projects that have sat around with no funding for years.

“This is going to be a game changer in these communities,” Kenney said.

The money is for “shovel-ready projects” that have been delayed by increases in hard costs such as inflationary pressures and this funding helps to bridge that gap to allow for construction to finally begin.
The hope is that projects will begin construction in the spring and then have an 18-month window to complete, otherwise, the developer will have to repay the money.

VIOLENT ATTACKS At SYSC
The Executive Council was informed of three determinations by the Commissioner of the Department of Health and Human Services that on Sept. 10 and Oct. 4 a supervisor at the Sununu Youth Services Center sustained injuries in the line of duty “due to a hostile or overt act, or an act caused by another during the performance of duties which are considered dangerous in nature.”

It did not indicate if it was the same employee or a different one with the same position.
Additionally, on Sept. 22, a mental health worker at New Hampshire Hospital sustained an injury in the line of duty.
Warmington, Executive Councilor for District 1, asked Joe Ribsam, DCYF director what is going on and how the conditions remain at the facility.

He said the fundamental issue is a critical workforce shortage but it is getting better.
When more than 40 workers are needed to operate the Sununu Center, there are more like 20 workers now.

Three weeks ago, the state-mandated overtime for workers at the Sununu Youth Services Center in Manchester following several violent incidents there required staff to call in the police to help control the situations.

“I feel we are in a much better place today,” he said because the department encouraged other DHHS workers to pick up more shifts and they are now being trained.

But a long-term issue exists particularly with a closure date looming next year for the facility but no alternative facility identified by the legislature.
“It is hard to recruit staff,” he said, with that uncertainty looming on whether or not they will have a job after that closure date.

Sununu said at a press conference he expects there will be a surge initially in people seeking such coverage, which is already offered to children of modest means.
He noted that the costs of emergency room visits related to oral health should go down.

Warmington noted “It’s been a long time coming,” and welcomed the new benefit to citizens.
Kenney echoed the same. He noted it was in 2006 when he looked at creating a dental clinic in Tamworth and the tremendous pushback he got from the legislature then.
“It is part of the human condition,” he said, noting cases where oral health kept people out of work or from socializing.

“Smiling is important to healthy lives,” he said, “and the need goes largely unrecognized.”

Stevens noted a 22 percent in increase of payments to dentists through the program would help incentivize doctors to accommodate these new patients.

CASS NOMINATED TO HEAD DOT
William J. Cass of Laconia, who is currently the assistant commissioner of the state Department of Transportation, has been nominated by the governor to serve as the department’s commissioner.
If confirmed, he will succeed Victoria Sheehan of Nashua who announced her intent to depart the position to take a post in Washington, D.C. last month.

The salary for Cass will be $142,272 and the term will be through Dec. 3, 2023.
Cass has 36 years of experience in transportation engineering and 26 in supervisory and management positions for the state. He earned his degree at the University of New Hampshire.
Shawn Jasper was renominated to the commissioner of the state Department of Agriculture, Markets, and Food.

PAXLOVID
A late item agenda will allow any person to get a telehealth appointment with a doctor and get a prescription for Paxlovid, which can be sent to their door.
Shibinette said there is plenty of the drug which helps alleviate symptoms of COVID-19 but access has been an issue and this allows for folks with the virus to better access the drug through a physician.

LACONIA STATE SCHOOL SALE
A purchase and sales agreement to sell the former Laconia State School is likely to appear at the council table in January, said Charlie Arlinghaus, commissioner of the state Department of Administrative Services.

He said his staff received some proposals and have selected one with whom to pursue a purchase and sales agreement and that is ongoing, with no information revealed on who the developer is or what the price will be.

The developer is looking at creating a self-sustaining community with more than 1,300 units of every kind of housing, and 50 percent of the more than 200 acres left in open space.