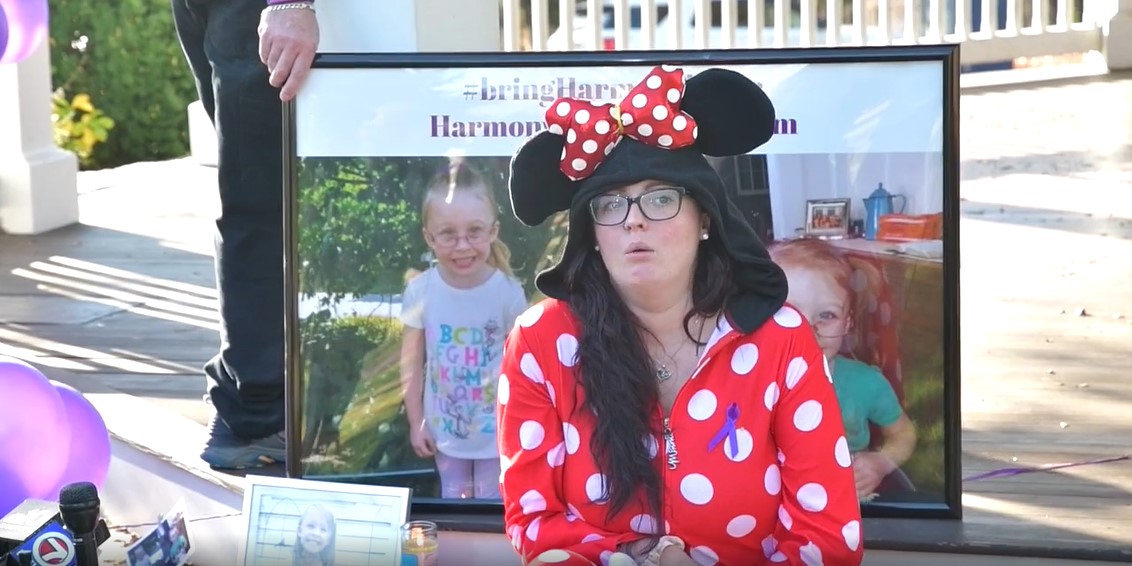 Crystal Sorey, Harmony Montgomery's mother, talks about life without her murdered daughter at a vigil in Manchester Sunday.

Crystal Sorey dressed as her murdered daughter’s favorite character Minnie Mouse as family and friends remembered the murdered little girl at a vigil in Manchester Sunday.

Last week, Harmony’s biological father Adam Montgomery, 32, was charged with second-degree murder for recklessly causing her death by repeatedly striking Harmony in the head with a closed fist in Manchester on or about Dec. 7, 2019.

He was also charged with falsifying physical evidence, abuse of a corpse, and witness tampering. Adam Montgomery had custody of Harmony when she died. Her body has not been found.

At the vigil, Sorey spoke about her daughter lovingly to reporters. She had not been seen for two years before authorities began searching for her.

“Harmony was very very small, At 1 year old she loved the Mickey Mouse Clubhouse show… Harmony’s favorite character is Minnie Mouse. Her whole room was Minnie Mouse…Pretty much every Halloween she wanted to be Minnie Mouse,” Sorey said.

Sorey teared up remembering what the character meant to her daughter when she had custody before losing custody to Adam Montgomery. “Minnie Mouse really made her happy,” Sorey said.

“We want to close this chapter on New Hampshire because nothing good happened for her here,” Sorey said.

Her life has been difficult, she said.

“I’m not going to lie. I’ve been put through hell for the last 10 months, people bashing me and saying I was part of it in some way but the fact that the truth is out and I don’t have to deal with that anymore, there are still going to be people who blame me in some way,” Sorey said.

“…I know my part and I have to live with that, but this means the world to me,” Sorey said of the vigil and people coming together for her daughter.