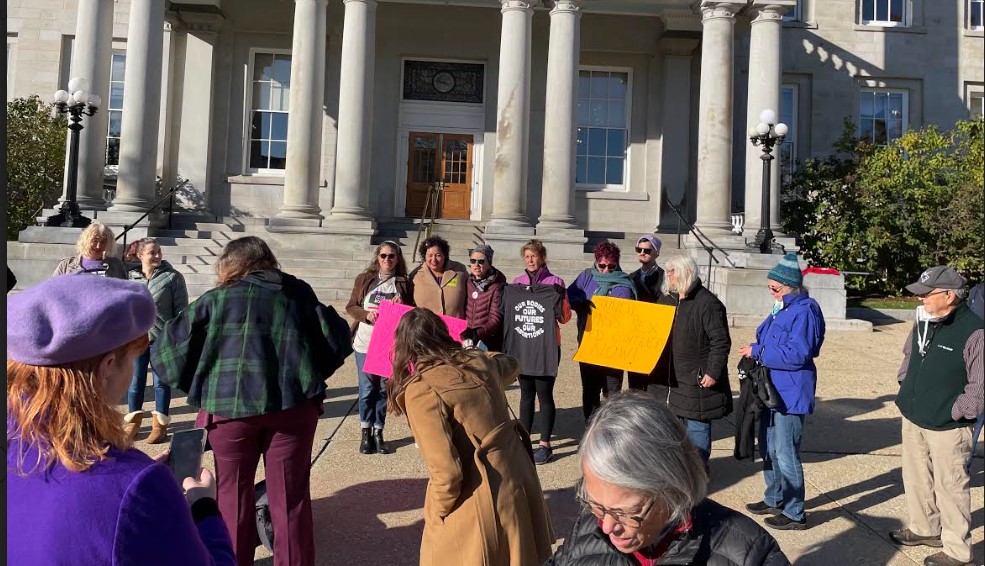 Protesters gathered in front of the State House Wednesday to support sex-ed program for at-risk students.

CONCORD – Protesters came to the State House Wednesday to support a contract to teach sex education to at-risk youths in Manchester and Claremont but it did not get off the table with a majority of the Republican-controlled council saying they were hearing from parents concerned about their rights.

For the second time, the council refused to remove the $682,074 contract with Amoskeag Health Center in Manchester and TLC Center programs in Claremont to continue what state health officials call a very successful program, the Get Real program.

Gov. Chris Sununu, a fellow Republican, asked councilors what has changed, noting they approved the exact same contract in years past.

Republican Councilors Joe Kenney of Wakefield and David Wheeler of Milford said they wanted more information on the curriculum for elementary-age students and to look at the parent permission slip outlining the curriculum before they were willing to vote. Councilor Ted Gatsas of Manchester also voted to leave it on the table.

Councilors Janet Stevens, a Rye Republican, and Cinde Warmington, a Concord Democrat, moved to have the contract removed from the table and brought forth for a vote. It failed on a 2-3 vote.

Sununu, who placed the measure on the agenda said, “It would be great to move forward” and questioned why the three councilors who voted on the exact same contract over the years were holding it up.
Wheeler said he was concerned about the curriculum for the elementary school level.

Lori Shibinette, the commissioner of the state Department of Health and Human Services, said she would get him that information. She noted it was requested by Wheeler at the morning breakfast.

Kenney said he, too, would also like to see more details on the contract and ask the state Department of Education to review the Get Real curriculum.
“So you voted for this contract and this curriculum before but you want to read it now, years later?” Sununu said.

“As did you, councilor,” he said to Wheeler, “It is absolutely no different. So what is the hold-up?”
Kenney said there is now a strong parental rights movement around the state that has brought the contract to their attention.

Warmington said the contractors have provided information about the program which has been a success for the past decade.
Shibinette said the program is aimed at at-risk youths and is evidence-based and requires parental consent.

Warmington said there is evidence that the program works in reducing unwanted pregnancies and without the program youths may get inaccurate information instead on the street.

“I have to correct some of the misinformation,” said Wheeler, arguing that he thinks the parents don’t know that the program teaches youths about other sex acts that won’t get them pregnant.
He gave an example of the Manchester School District in which he alleged the schools don’t want to disclose certain information to parents about their children.

Before the council meeting, several dozen protesters were holding hand-made signs outside the State House. They called for the council to approve the contracts.

Kelly said she was motivated to run for the council on the issue of choice, noting that the council holds important purse strings in the state by authorizing contracts. She noted it has recently denied funding for reproductive clinics that provide for basic health care needs.

Kelly said the attempt to hold up this sex education contract for at-risk youths is another example of the council members listening to the far-right agenda.

“The incumbent executive councilor is a ‘no’ vote on health care,” Kelly said, and “he’s making it a political game.”
Kelly said she has an 11-year-old daughter and is concerned about her reproductive rights.
“It’s about access to health,” she said. “It’s unfortunate that that is happening.”

Planned Parenthood New Hampshire Action Fund released a statement following the meeting.
“Opportunities such as these evidence-based, optional, after-school sexual education programs, which require parental consent, are critical to the health and well-being of our young people and our community. These programs encourage ongoing parental engagement, support parents continuing the conversation at home, and foster trusting relationships between the facilitators and families.”

Liz Canada, advocacy manager for PPNNE/Planned Parenthood New Hampshire Action Fund added,
“These programs work and are beloved by their communities. And yet, the Executive Council has continued to refuse to even vote on the funding. This is short-sighted, politically motivated, and jeopardizes the ability of New Hampshire’s most vulnerable young people to get the critical information and support they need to form healthy relationships, avoid sexually transmitted infections, prevent unintended pregnancy, and parent effectively.”

Thanks to a 2016 settlement with Volkswagen over violations alleged in the Clean Air Act, the state will have a number of electric vehicle charging stations installed throughout the state and the first one from that fund will be built at the Errol General Store near the tip of the state in Coos County.

The state received 39 applications and will issue 14 grants according to the Department of Environmental Services.

This contract, for $132,350, will allow for two direct current fast chargers and three level 2 alternative current charging stations to be operating outside the store 24 hours a day for the next five years.
Volkswagen was charged with violations of the Clean Air Act in 2016 https://www.des.nh.gov/business-and-community/loans-and-grants/volkswagen-mitigation-trust and part of the settlement money is creating a corridor for EV charging to help develop and support tourism.

The council approved a $343,652 contract with Gallup Inc. of Washington to research family attitudes and experiences with public education and reasons for choosing to exit public schooling.
Commissioner of Education Frank Edleblut said 1 to 1.5 percent of students have gone off to other schools historically, but during the pandemic, it was as much as 4 percent.
“We are trying to understand why parents are not coming back and what they are seeking which we are not offering,” Edelblut said.

“We have not come back to baseline,” Edelblut said, “and we are wondering why.”
Warmington asked why the money wasn’t being spent on finding what those who stay value about the experience.

“It seems to me we could use these ARPA funds for other challenges,” Warmington said, making the example of perhaps questioning the residents of Croydon who came out en masse after a small group cut funding in half and had to restore it.

“We know what they expressed publicly,” Edleblut said.

Warmington opposed the Gallup contract but it passed 4-1.
The Education Department removed from the agenda a contract to provide education training services for charter schools with B. Feit Insight LLC of Waltham, Mass.

Victoria Sheehan of Nashua, state transportation commissioner for the past seven years, is resigning effective Nov. 27.
Kenney praised her service and noted while she is going on to a “great position” it will be a loss to the state of New Hampshire.
His comments were echoed by all four other councilors.
In her letter on Oct. 12, Sheehan said “…it was a privilege to work with the dedicated men and women of the Department of Transportation. Their commitment to the mission of ‘Transportation Excellence Enhancing the Quality of Life in New Hampshire’ is evident in every action undertaken by the Department. Their talent is second to none and I truly appreciated the can-do attitude that was exhibited across the agency.”

Brian J. Wilson of Simsbury, Conn. was confirmed as the new state parks director, returning to the state from Connecticut where he worked for state parks. He will replace Phil Bryce who stepped down earlier this year.
The Director of the Division of State Parks within the Department of Natural and Cultural Resources is a job that pays $114,166.

Tri County Community Action Program Inc. in Berlin received a five-year renewal of a working capital loan guarantee in the amount of $750,000 to help residents of the state’s three northernmost counties if there are delays in federal funding assistance.
The vote was 4-1 with Wheeler opposing the line.

The Executive Council authorized $55.1 million from the federal COVID-19 relief program ARPA including $25 million for Sullivan County Health Care of Newport for its nursing home infrastructure; $20 million for a community center investment program that will provide funding for facility improvement to senior centers throughout the state; $6.4 million for the Judicial branch for upgrades; and $3.5 million for county emergency equipment investment.

The money is coming from the American Rescue Plan Act State Fiscal Recovery Funds.
INVEST NH contracts, which will provide $100 million matching grants for housing, are expected to be brought to the council in two weeks, said Taylor Caswell, commissioner for the Department of Business and Economic Affairs who also heads up the Governor’s Office for Emergency Relief and Recovery (GOFERR).

New Hampshire Electric Cooperative of Plymouth will receive $50 million in ARPA funds. Kenney said broadband will be a game changer for rural New Hampshire in the state and he said it will lead to growth in those areas.
This is just the beginning of a rollout of funds, Caswell, said to “kick us off” in the most needed areas.
He expects a total of $122 million will be distributed to get to that underserved category.
New Hampshire Electric Cooperative is the second-largest utility in the state and is member-owned.
The cooperative has many rural areas it serves and this will allow 23,000 new locations to be hooked up to fast internet through the program, Caswell said.
That is about $2,100 per hookup.

They need to provide a performance bond, he noted.
“I do feel we have that protection in place,” Caswell said.
Kenney asked if it is possible that $250 million will be spent overall, and Caswell said, yes, that the state will be the most connected state.

“We need to be able to establish NH as a place to come here,” and work from home, Caswell said.
“I’m excited,” said Kenney saying it was desperately needed in the rural areas of the state he serves.
The contract is effective through December 2026.

Warmington said she was concerned Cheshire County was not able to participate in this contract.
In round two of the program, Caswell said there would be applications accepted for other rural areas of the state not covered by this contract.

He said he couldn’t guarantee but would expect the second round would be funding locations where broadband is still lacking to fill in the technological gaps.