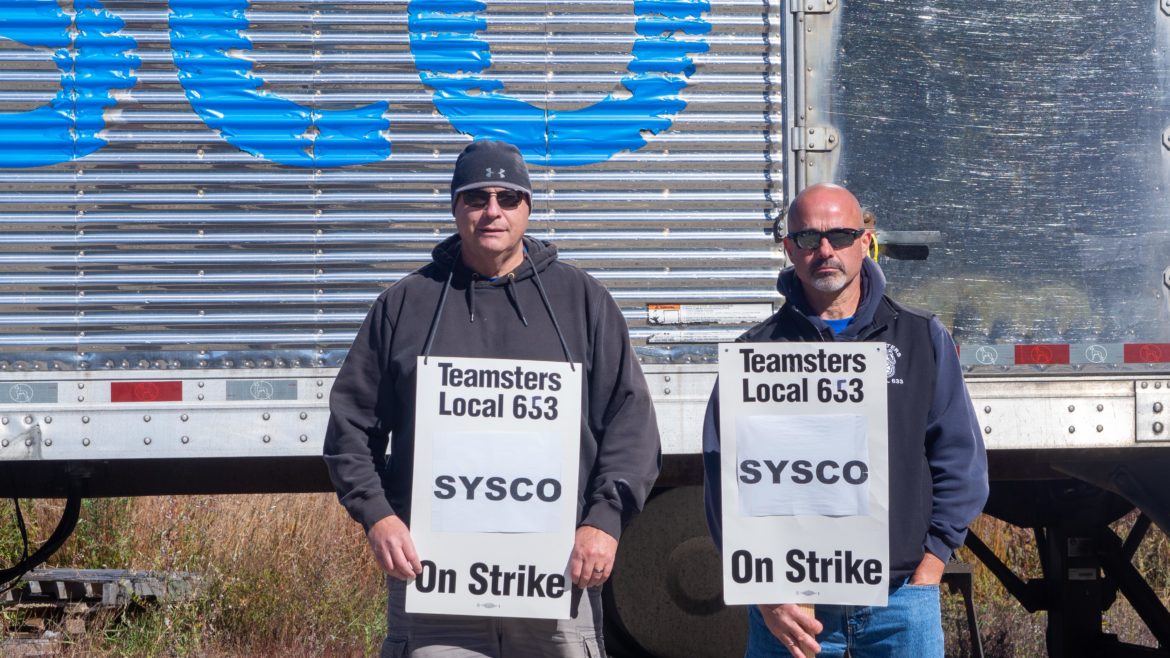 Jeff Parkinson, left, and Dave Remick on the picket line.

Arnie Alpert is a retired activist, organizer, and community educator long involved in movements for social and economic justice. Arnie writes this occasional column Active with the Activists for InDepthNH.org.

BOW – Drivers for Sysco, the Houston-based food service giant, went on strike at three locations in New Hampshire on Oct. 1 when their union contract expired.  Instead of spending up to 14 hours a day loading and unloading trucks and driving all over New England, they’re picketing in Bow, Manchester, and Epping.

The issues are pretty standard ones:  pay, insurance, and retirement.  But the conflict is about something more.

Daren Lones, from Manchester, was on picket duty Friday in Bow, where Sysco trucks unload and reload behind Berube’s Truck Accessories on Route 3A.  He’s been a Sysco driver for eleven years, the last five of which he’s been driving shuttles.  That means taking a tandem trailer from the company’s regional warehouse in Plympton, Mass., to one of the yards where he meets up with the delivery drivers.  Then, he hauls two empty trailers back to Plympton.  It’s back-breaking work, he says, and days can be 10, 12, or even 14 hours long.  It’s not just the pay that’s at issue, he says, “it’s the work.”

Sysco calls itself “the global leader in food distribution.”   According to their website, the company’s business is “selling, marketing and distributing food products to restaurants, healthcare and educational facilities, lodging establishments and other customers who prepare meals away from home. Its family of products also includes equipment and supplies for the foodservice and hospitality industries.”

“We deliver to nursing homes, all kinds of health care facilities, we deliver to restaurants, we deliver to schools, colleges, anybody pretty much that serves food,” Remick said.  Back when he started driving for Sysco nearly 23 years ago, he said the company was “pretty good” to its workers.  “But as time went on, corporate out of Houston got more involved, more involved. And as they did, things started disappearing.”  The things that were disappearing included a pension plan and some of their paid holidays.

When workers sought to organize a union, the company brought in union busters (known more politely as “management consultants”) to stop them.  “They fought us hard,” Remick recalled.  But the workers prevailed and are now members of Teamsters Local 653.

Prosper they have.  Sysco generated $68 billion in sales last year, with net earnings of $1.4 billion, more than double the previous year, according to their 2022 annual report.  The CEO’s compensation package topped $23 million last year.  According to the AFL-CIO’s Executive Paywatch website, that’s 309 times the median employee’s pay.

“It’s terrible that a company of that magnitude, that makes that much money, doesn’t care about their employees,” Remick said.  “We’re just really looking for a decent contract, you know, to care for our families and compensate us for being away from them.”

Sysco says it offered an excellent compensation package to those it calls its “associates.”  In a statement released October 6, they said they’ve offered “industry-leading pay,” with substantial raises over the life of the new contract plus a higher employer contribution to the health care plan.  Instead of the union’s proposal to join the Teamster pension fund, the company wants the “associates” to stick with the company-sponsored 401-K retirement plan.

“The Teamsters’ agenda,” Sysco said, “is aimed at gaining attention and promoting the interests of the union leadership.”

Remick rejects the company’s assertion that they were offering industry-leading pay. Apparently, most other union members do, too.  When the proposal came up for a vote in late September, members voted 175 to 5 to authorize a strike.

The strike involves about 300 drivers in New England.  Another Teamsters local in upstate New York is on strike, as well.  The Food Management newsletter reported on October 7 that the company said it has “brought in third-party replacement drivers and is operating a 24/7 will call operation for customers.”  We have also heard that non-union drivers from Maine are servicing New Hampshire routes.

The strike is Remick’s first and “it’s not fun,” he said.  To keep everyone’s spirits up the union members stay in regular contact with each other.  “We’re all here for each other,” he said, “we try to keep everybody thinking positive.”

Remick is well aware that Sysco is not the only workplace in turmoil.  Every week brings news of more organizing drives and strikes, at college campuses, fast food establishments, distribution centers, and retail chains.  A nationwide rail strike is still a possibility.

“Right now, I mean, there’s a worker revolt, I guess you’d call it, you know what I mean?  People are tired of corporate America,” Remick said.