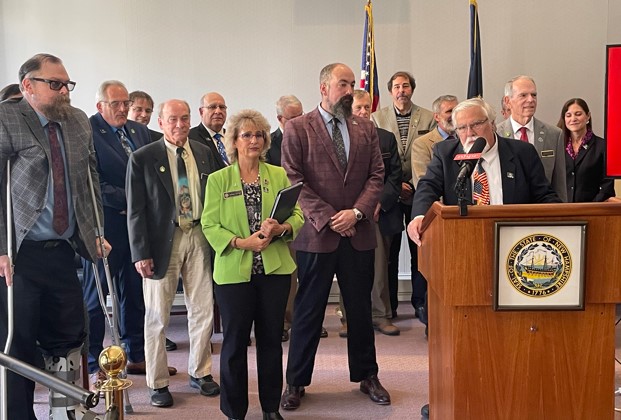 CONCORD – Top House Republicans explained their support for two new state fuel and electric assistance programs at a news conference Thursday and blamed the problem of high heat and electric prices on the Democrats in Washington.

They urged voters on Nov. 8 to choose Republicans up and down the ballot to reduce the chance expensive renewable energy programs favored by Democrats will be passed.

But Democrats said they heard no solutions from the Republicans on the energy crisis and expect that the next legislative session will again see the two sides polarized on initiatives. After the Democrats sent a press release challenging Republican comments on energy, House Speaker Sherman Packard, R-Londonderry, sent out a news release saying Democrats were promoting false information.

One thing that Republicans said at the news conference they might be willing to revisit is biomass production in-state provided it is not cost-prohibitive to the consumer.

The press conference was held in the lobby of the Legislative Office Building and it was attended by some Democrats.

Packard said Republican leaders met with state fuel providers a month ago, who were unable to give them estimates on how much higher the price of a gallon of oil would go this winter.
He said that triggered the legislative decision to vote to authorize money to provide $650 a month relief to individuals in two new state programs aimed at helping middle-income residents.

On Sept. 15, the House and Senate in a bipartisan fashion concurred and Gov. Chris Sununu signed HB 2023 https://www.gencourt.state.nh.us/bill_status/billinfo.aspx?id=2232&inflect=2.

Packard said those who will benefit are residents who do not qualify for the federal Low Income Heating and Energy Assistance Program because their income is a bit too high.

On Tuesday, the Executive Council voted unanimously on contracts to move those general fund dollars out. The Manchester area is getting $15 million, Southwest Community Services in Keene is receiving $4.6 million, Belknap-Merrimack County CAP will distribute $5.4, Dover’s Strafford County CAP is receiving $2.9 million and Tri-County CAP in Berlin will be receiving roughly $6.2 million.
The money will go directly to their heat and electric utility and not be received as a check in the mail with $200 credit on electricity and $450 for fuel for those who qualify.

Packard called it the “largest one-time energy assistance package in history.
“We had to do this because of the failed policies coming out of Washington, D.C.”

He noted that in the news Thursday was a report that OPEC+ plans to cut oil production by 2 million gallons a day, a matter being met as political in Washington and angering the Biden Administration.

This is expected to the rising prices this winter. Packard said the Biden Administration has shut down pipeline projects and Alaskan oil exploration and pursued policies to make existing resources unaffordable.

Packard said due to New Hampshire’s good fiscal policy, the state is able to help, and “we hope this is going to be enough but if oil prices continue,” Packard said, “We might have to look at it again. We hope we don’t have to. Make no mistake about it, this is Washington’s fault.”

Vose said the simple supply-demand calculation is the reason for such financial distress. “If you reduce the supply of any commodity while the demand stays the same the price will go up,” Vose said.

After the press conference Kat McGhee, D-Hollis, a member of the House Science, Technology, and Energy Committee, said she heard no solutions from Republican leadership.

“The world is moving on and the state of New Hampshire under Republicans is falling behind and giving us old solutions to current problems that are inadequate,” she said.

McGhee has been working on the state’s energy future for many years, going back to when former Democratic Gov. John Lynch put together an overall plan and in years when the Democrats controlled the House and Senate.
Now that the state House, Senate, and Executive branch are controlled by Republicans, progress has stalled, she said.

House Democrats blasted the GOP press conference in a statement issued after it was held.
“Today, House Republicans held a press conference to blame everyone but themselves for rising energy costs in New Hampshire.  When asked by the press what policies Republicans would pursue if they remain in control after this November’s election, GOP leaders offered no specifics, just vague references to ‘seeking solutions.'”

House Democratic Leader David Cote, D-Nashua, said, “The spike in energy costs that Granite Staters are currently facing has been looming for years.  New Hampshire is over-reliant on natural gas because Republicans have consistently blocked proposals to expand renewable energy production and diversify our energy sources. With the impact of their decisions coming to fruition, NH Republicans are scrambling to find anyone but themselves to blame.

“This is not rocket science.  In our neighboring New England states, where renewable energy production is high, prices are not soaring like they are in New Hampshire.  We are on an island because Republicans have refused to diversify our energy sources.
“When Democrats were in the legislative majority, Governor Sununu vetoed bills to expand renewable energy production through net metering and biomass. Just earlier this year, House Republicans manipulated the process to prevent debate on 12 Democratic bills that would address our energy crisis,” Cote said.

“Instead of trying to pass the buck to Washington, D.C., NH Republicans need to look in the mirror and recognize the harm their inaction has caused. GOP leaders offered no proposals to improve our situation when asked by the press, even after acknowledging that energy diversification is key to decreasing costs,” he said.

Cote said House Democrats will continue fighting for policies that expand renewable energy production.
“It is past time we join our New England neighbors in building the infrastructure needed to prevent the price spikes Granite Staters are witnessing today,” he said.

Vose said solar is incredibly expensive because you need land for solar farms and land is expensive.
He said to meet the state’s future climate goals the state will need the equivalent of 55 square miles of land to achieve that.
“That is not going to fix our problems for this winter or next,” Vose said.

There has been support for renewable portfolio standards, ratepayer-assisted systems benefit charge, and net metering and he noted about $12 of his $200 a month electric bill goes to those renewable-benefitting programs.

“Some think it is a trivial amount but…it’s cost shifting,” Vose said. “We need to remind everyone that the cost of natural gas, oil, and electricity is mostly out of our hands but we still have to be vigilant and make sure energy policy does not significantly contribute to high energy prices,” he said.
“And we have to hope and pray that reason will prevail in Washington, D.C.”

Osborne said he is upset that Democrats’ “scorched earth energy policy” is choosing winners and losers.
Cancellation of the Keystone Pipeline, abandoning Alaskan oil exploration, “these punitive costs…are a direct result of Democrat policies and they come from outside the state.”
“If you have had enough of these price hikes and you would like to be able to heat your house,” Osborne said, “we are going to need you to vote Republican up and down the ticket.”

Upon questioning, Vose said, “this may be the year of biomass…we are going to be looking at legislation that might make it possible…as long as those procurements are just and reasonable.”

Offshore wind, hydro and next-generation nuclear are also likely going to get a new look and study but Harrington noted these renewables have their problems.
When the wind gets up about 35 mph these turbines have to shut down and where would the backup be, he asked. Nuclear is going to be studied and there are some very positive things coming out right now but not in the next 10 years.
Vose said the hydro opportunity for the state passed, referring to the failed Northern Pass power project  but “that might be something to revisit.”

“Democrats had plenty of opportunity to pass their initiatives when they were in charge but failed to build consensus even among their own party members. Their ideas consisted of a massive carbon tax, attempts to repeal RGGI rebates for ratepayers and massive net metering subsidies to solar developers at the expense of ratepayers.

“The reality right now is that New Hampshire families will face challenges this winter. Fuel deliveries are happening now. Price spikes are happening now. Most households rely on oil or gas to heat their homes. Unless Democrats think replacing everyone’s home heating system before November is rational, which it is not, then we can only focus on real solutions for New Hampshire’s very real problem. Nothing the Democrats are talking about would have alleviated the burden of Granite Staters and would have made electric and fuel bills higher than they are now. Democrats have been desperate to pass the blame onto anyone but themselves,” Packard said.