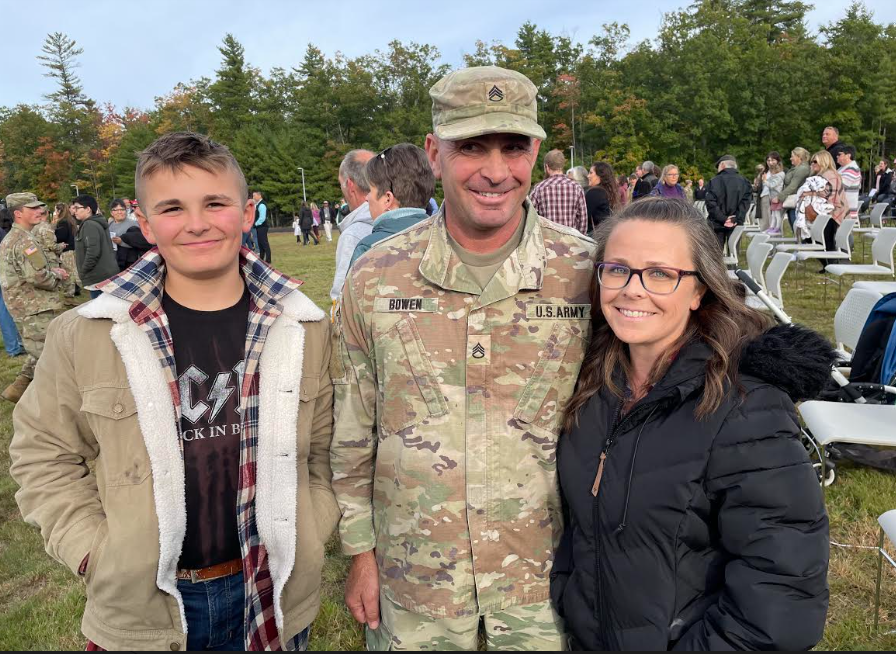 Shane Bowen, Michael Bowen and Renee Bowen prepare for Michael's deployment to the Mexican border as part of the NH Army National Guard.

PEMBROKE – The Bowen family of Epsom is preparing to be separated for more than a year.

Renee Bowen’s husband and her son Shane’s father need to say “farewell” to husband and father Michael Bowen as he heads to the Mexican border to provide service to his nation and state.

On Monday, they stood together for a picture following the departure ceremony and official deployment of the 941st Military Police Battalion and the 237th Military Police Company at the Edward Cross Training Complex at 772 Riverwood Drive.

Renee and her extended family came for the sendoff with Gov. Chris Sununu thanking the more than 160 families, particularly for the sacrifice they make for their communities and country when their loved one heads off for service.

This deployment is a result of a federal mobilization order directly from the US Dept of Defense.

“New Hampshire is grateful for the heroic men and women of our National Guard,” said Sununu. “They answered the call to serve during the COVID pandemic, and are now answering our nation’s call — deploying to the ongoing humanitarian crisis along our southern border. As these brave men and women deploy, New Hampshire stands by our National Guard and we wish everyone a safe and speedy return home.”

Approximately 44 soldiers from the 941st Military Police Battalion HQ will be deployed to provide command and control over four subordinate units “companies” from NH, RI, IL, and KY numbering approximately 500-soldiers total. Their sector covers approximately 250 miles of border extending to the Gulf of Mexico. This is the unit’s first deployment.

Approximately 120 soldiers from the 237th Military Police Company will be deployed to primarily surveillance sites along the border. Soldiers are prohibited from being in contact with illegal immigrants and notify CBP of any border crossing to primarily stem the flow of people and illicit drugs, weapons, and money. The unit was last deployed to Afghanistan in the 2012-2013 timeframe.

Both units supported the state’s COVID-19 response efforts, aided the Department of Corrections, were activated for civil disturbance responses, and supported hospitals during the surge.

A previous NH National Guard unit deployed to the southwest border from October 2020 through November 2021, which helped result in 207,320 assisted apprehensions, $893 million in illegal drug seizures, and 20 migrant lives saved.
MG David J. Mikolaities, adjutant general of the New Hampshire National Guard said the customs and border patrol have encountered an average of over 7,800 migrants crossing the border on any given day.
This compares to 2019 when 1,600 were crossing each day, he said.

“Good luck, God Speed, Live Free or Die,” Mikolaities said.
LTC Mark B. Patterson, commander of the 941st noted the battalion helped through the pandemic to deliver 800,000 COVID-19 vaccines, 150,000 COVID-19 tests delivered nearly 400,000 pounds of food, and answered more than 5,000 calls at call centers to individuals in need.
There were also individuals who responded to the U.S. Capitol during the insurrection on Jan. 6, 2021. The soldiers also ensured security at corrections facilities and also supported operations in Afghanistan and were on the ground in the last days of the fall of Kabul.