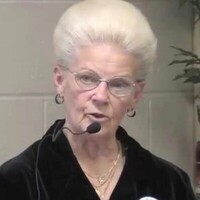 From 1977 to 1980, Alfreda served as a State Representative for the State of New Hampshire, as well as the President of the Laconia State School (ARC). In 1978, she was instrumental in the class action suit against the State of New Hampshire, regarding the deplorable conditions at the institution. She contacted the United States Department of Justice, and they joined in the lawsuit, which resulted in the closing of the school. This was the first state in the union to close its doors to their own institution that housed developmentally challenged individuals. She traveled to many states as a speaker at conventions regarding the Laconia State School. Alfreda provided others with an example to follow with their states.

In 1981, Alfreda received the Matilda Mandrey Award, for helping the developmentally disabled population in New Hampshire. Also in 1981, she received the Book of Golden Deeds Award from the Exchange club for her “Untiring” and “Inspirational” achievements regarding the developmentally disabled population in New Hampshire. From 1981 to 1982, she was the President of New Hampshire ARC. In 1982, she received the Member of the Year Award, of the Northeast Region, from the Association for Retarded Citizens of the United States of America.

From 1993 to 2008, she was the co-owner of P.S. Tours Travel Company. From 1998-2002, she served as the Co-Chair of the Coalition for Recreational Activities for the Developmentally Disabled (CRADD). In 2001, she was honored by the Concord Monitor Newspaper, as “One of the One Hundred People Who Shaped the Twentieth Century in New Hampshire”, and her story was published later in a book titled the “The New Hampshire Century”. From 2006 to 2013, Alfreda was a member of the Board of Directors for the Disabilities Rights Center, in Concord, NH. From 2007 to 2010, she was a member of Board of Directors for the State Committee of Aging (SCOA), in Concord, NH.

In 2007, Alfreda received the John F. Kennedy Merit Award from the Salem Democratic Committee. In 2008, she received the Mother of Pearl Award from the Greater Salem Chamber of Commerce and the Salem Cooperative Bank for her volunteer work with Greater Salem Caregivers, Warde Health Center, in Windham, NH, Silverthorne Adult Daycare, in Salem, NH, and the Salem Senior Center. In 2010, a documentary was created and shown all across New Hampshire, titled “Lost in Laconia” and was dedicated to her.

In 2011, she was deeply honored when she received the John P. Ganley Award from the Greater Salem Chamber of Commerce. In 2017, she received the Briana Dillion Leadership Award, of Concord, NH.

In addition to her parents, Alfreda is predeceased by her husband: Harvey Smith Jr.; her daughter: Janet Smith, who passed away in 2004; and her siblings: Sophie Juliano and Michael Grabiec.

At the request of the family, all services will be private. Interment will take place at Pine Grove Cemetery in Salem, NH. In lieu of flowers, memorial contributions may be made to the Play Among the Stars Theatre Group, PO Box 2222, Salem, NH 03079. To leave an online message of condolence, please visit www.carrierfuneralhome.com. Arrangements are under the care of Carrier Family Funeral Home, 38 Range Road, Windham, NH 03087.