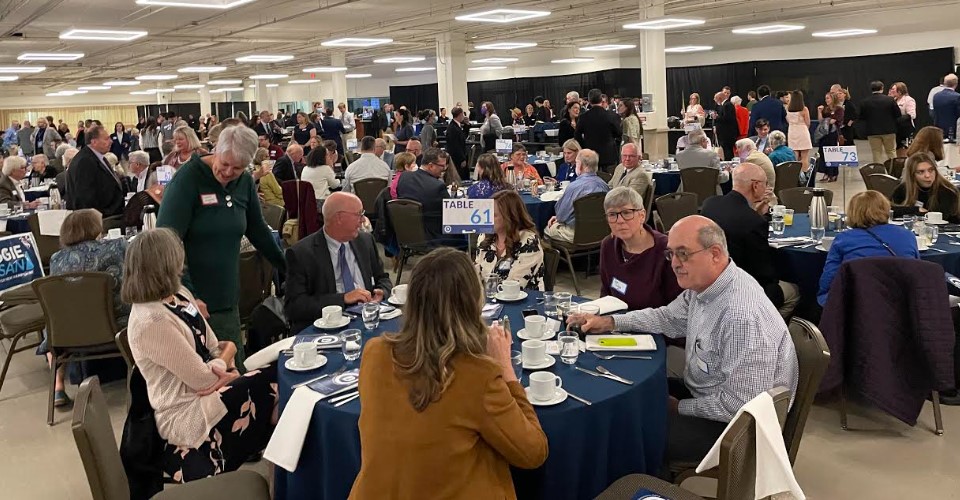 The Eleanor Roosevelt Dinner drew 700 Democrats to get ready for the general elections in 44 days.

MANCHESTER – U.S. Transportation Secretary Pete Buttigieg told a sold-out fundraising dinner of 700 Democrats Saturday that the midterm elections present an opportunity to change the future and Republicans have given everyone the most important reason to get out and vote on Nov. 8.

With the election 44 days away, issues of abortion rights and education funding are taking center stage, and Democrats who want to retake the New Hampshire House, Senate, and Executive Council and retain all four congressional seats were all at the event urging the faithful to get out and mobilize the vote.

State Sen. Dr. Tom Sherman, D-Rye, the Democratic gubernatorial candidate who is vying to unseat Gov. Chris Sununu, and Cinde Warmington, the lone Democrat on the state’s five-member Executive Council, were among the speakers at the Eleanor Roosevelt Dinner.

Buttigieg said the Republican priorities are out of step with the American people.
They have become so radical that even the moderate members of the party have had to resort to tactics that are not normal.
The moderate Republicans, he said, feel homeless “and we should welcome them into the Democratic Party.”

He said the nation understands what excluding feels like. Republicans try to exclude “and that is not what made America great.”
Among those attending the event at the Manchester Doubletree Hotel convention center was 91-year-old Pat Provencher of New Hampton, who said her son, a Republican in Florida, paid for her ticket.

She was anxious to hear from Buttigieg, who she said is doing an amazing job in Washington, and to hear from candidates in advance of the election.

RETAKE THE NH HOUSE AND SENATE

Speakers at the event focused on the need to return the Democratic party to majority control of both chambers in Concord.
“Right-wing extremism is wrong for New Hampshire,” said state Rep. Matt Wilhelm, D-Manchester. State Rep. and House Majority Leader Jason Osborne has shown he cannot be trusted, Wilhelm said.

State Senate Minority Leader Donna Soucy, D-Manchester, said the Democrats are going to take back the New Hampshire Senate.
“This truly is the most important election of our lifetime,” she said.
“We will not go back and we will not just ‘get over it,'” Soucy said, referring to a comment by U.S. Senate candidate Don Bolduc, a Republican.

“Public money belongs in public schools,” she said to a roar of applause.

WARMINGTON ON EXECUTIVE COUNCIL
The lone Democrat on the state’s five-member Executive Council, Cinde Warmington of Concord said she cannot do the work alone in order to make real change.
“We must elect a Democratic majority this November. We have no choice,” she said.
Warmington called it “craziness,” at the council table.
She said just this past week, she had to “educate” Gov. Chris Sununu on the new abortion law.

“He didn’t seem to know how worse his abortion ban is from other states,” she said.

U.S. Sen. JEANNE SHAHEEN
Senator Jeanne Shaheen, D-NH, asked those who have been knocking on doors to stand up so they could be recognized.

For too long, she said the state has had a governor who has sat on federal funding for children and sent it back.

She said state Sen. Tom Sherman, D-Rye would do a much better job and should be elected governor.
Republicans, she said, deny the outcome of the 2020 election, want to eliminate voting rights, attack immigrants, end Social Security and restrict women’s rights.

“They think we should ‘get over it.’….we’re not ‘getting over it,’ we’re getting after it,” Shaheen said.
This November, “mothers and daughters, sisters and granddaughters are going to show up at the polls like never before,” she said, “and we are going to take back the State House in Concord.”

Congresswoman ANNIE KUSTER
District 2 Congresswoman Annie Kuster said the nation has faced so many challenges but people have been resilient and have made progress in Washington.

She said her opponent does not support those freedoms.
Abortion death panels have been an idea he has floated to determine whether women who are pregnant should live or die.
“If you don’t understand it, neither does he,” Kuster said.
While she did not name him, he is Republican Robert Burns.
“Our freedoms are on the ballot on Nov. 8,” she said urging everyone to get out the vote.

Congressman CHRIS PAPPAS
Congressman Chris Pappas, D-NH, said his opponent, Republican nominee Karoline Leavitt “is the most out of touch candidate that District 1 has ever seen.”
“We are going to make sure everyone in New Hampshire knows about it,” he said. “I know who I am fighting for, the people of New Hampshire.”

Dr. THOMAS SHERMAN
A physician, Dr. Thomas Sherman, a state Senator from Rye, said the government is now intervening in the most private and personal moments between a patient and a doctor.
“We can’t trust Sununu to stand up for these freedoms because he can’t even admit that they have changed,” he said. “Everything has changed.”
If Sununu wants a conversation on the economy, bring it on, he said.
“Right now, Granite Staters are paying a mismanagement tax,” he said, because of Sununu’s veto on renewable energy initiatives.
Sherman said Sununu is focused more on his political ambitions than New Hampshire.
He said the state should finally legalize adult-use recreational cannabis, like neighboring states.
And he criticized Sununu for not standing up to radical Republicans in his party.

U.S. Sen. MAGGIE HASSAN
U.S. Senator Maggie Hassan, D-NH, said Democrats have to win in November, “for the sake of our state” and to point it in the right direction.
She thanked those who knock on doors and asked others to do so, noting she won by only 1,017 votes.
“Organizing wins elections,” she said.
Hassan touched on her success in lowering medical costs, bringing infrastructure initiatives home, working on bipartisan solutions to the opioid epidemic, and working on health care benefits for veterans exposed to toxic substances.

Don Bolduc, her opponent on the Republican side, said “it is time to get government out of Medicare. And ‘Social Security has been there since 1935, its time for a change.'”
She noted it had been there and people have been paying into it since that time.
“We cannot let Don Bolduc take away Social Security or Medicare. It’s not him to take. It belongs to you,” she said.
Hassan noted Bolduc is trying to mislead voters and cover up his past assertions of election denying, asserting falsely that Trump won the Presidency and that it was stolen. He has recently said he was wrong about that.

Hassan said New Hampshire has among the most informed voters in the nation and they know his record.
Finally, she said, Bolduc has stated he would be a “yes” vote for a nationwide abortion ban.

You can learn a lot about Bolduc by the company he keeps, she said, noting Rick Scott and Mike Pence came to help him raise money and Mitch McConnell is now spending millions to help his campaign.