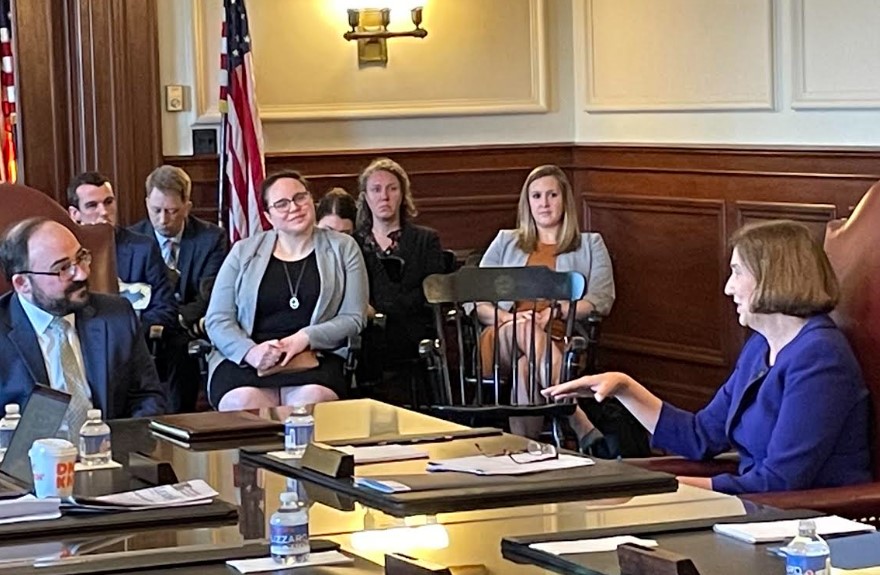 CONCORD – Ryan Guptill, the governor’s nominee to become a Circuit Court judge, went to a public hearing Friday with questions posed about how he would handle the backlog of cases, involuntary emergency admission hearings, and the lack of public defenders slowing the process.

A former public defender, he is a staff attorney in the New Hampshire judicial branch. Part of the job is to hear involuntary emergency admission cases and make recommendations to a judge on whether the person should be held or released.
Guptill said he has seen a transformative change in individuals in the courtroom and “I believe in the power of courts to have a positive impact in their lives.”

In his application, he said he believes he has the empathy, patience, and courage to be a judge.

“In a democracy, the role of the judge is to interpret the law as the legislature intended,” he said. “You have to be humble about it.”
Judges also have to be guardians of individual rights, he said.

Guptill grew up in California and went to Georgetown University, earning a bachelor of arts degree in government before going on to get his law degree from Georgetown in 2013.
He said he came to New Hampshire as a public defender. In his work as Circuit Court administrator, he said he has been inspired by drug court in the state and the meaningful changes that have come to those who were helped.

He said he has done a “deep dive” into New Hampshire law, particularly on the division of assets in a divorce and landlord/tenant disputes.

“I love learning the law and approaching the work with a learning mentality,” is helpful, he said.

Executive Councilor Cinde Warmington, a Concord Democrat and herself an attorney, asked questions about remote hearings from hospitals of people who are being held for mental health/behavioral reasons, and the recent decision by the high court requiring timely hearings for them.

Warmington learned the hearings are being held telephonically and not by video, and said she found that shocking given the fact people’s liberty is at stake during those meetings.

The emergency room boarding crisis still exists in this state with about 33 people this week waiting in hospitals and 48 state hospital beds empty for a lack of staff.

Lori Shibinette, commissioner of the state Department of Health and Human Services, said this is a complex multi-issue problem that will not be solved by just hiring enough staff, but by finding a way to discharge these individuals, and a lack of community programs at the “back door.”

Executive Councilor David Wheeler, R-Milford, who chaired the hearing, asked about how many IEA cases he has heard and what percentage of them he has recommended release of the individual.

He said in about 10 to 15 percent of the cases he has recommended release.
Guptill said there are 50 Involuntary Emergency Admission hearings a week in the state, and each lasts about 15 minutes.

Guptill said he is efficient and has always approached his job that way, keeping mindful of the law.
Executive Councilor Janet Stevens, R-Rye, asked about the case backlog in the state and strategies and priorities particularly as they relate to serious mental illness.
The Circuit Court is the emergency court, he said. Having the ability to process emergency orders efficiently is critical.

This can relate to domestic violence and eviction orders. Stevens also asked about the high number of cases of indigent defendants and the lack of public defenders and how his experience related to that problem.

“Waiting is bad” for victims, defendants, and the court system, he said.
My role as a judge, he said, would be to strengthen the public defender program.
“Plan like it is not going to go away,” he said. “We need to be thinking systematically.”

Judge James Leary, supervisory judge of the Nashua Division of the Circuit Court, spoke highly of Guptill.
He said he found him to be an excellent legal writer and a defender of rights.
“He is going to make sure the needs of that person are met,” Leary said.

He said what he looks for in a  judge is knowledge of the law, empathy for the individual and to make sure the person’s rights are preserved.
“He hits every one of those bases,” Leary said.

Joni Berman, who works with the judicial court staff and is not an attorney, said she was pleased to speak.
“Everyone is treated exactly the same,”  she said.
Berman said he was a critical player in revamping procedures for the court and allowing every individual to speak, with a calm demeanor.

“He is the ideal judge to have on the bench,” Berman said, “particularly as our technologies advance.”

He gave the description of a typical day and noted no two days are alike in the Circuit Court.
Sennett said he turned to Guptill for problem-solving and answering questions.

“Ryan is taking the time to listen to everyone and listen to them well,” he said.

Guptill is a great legal writer and he knows the law and applies it fairly and honestly without ever looking down on anyone, Sennett said.

“Ryan was and still is respected by everyone he worked with,” he said. “He gets the respect of all these different parties.”

There was no testimony in opposition to Guptill’s nomination.
A vote of the council is expected on Oct. 4 when it next meets at the New London Barn Playhouse.