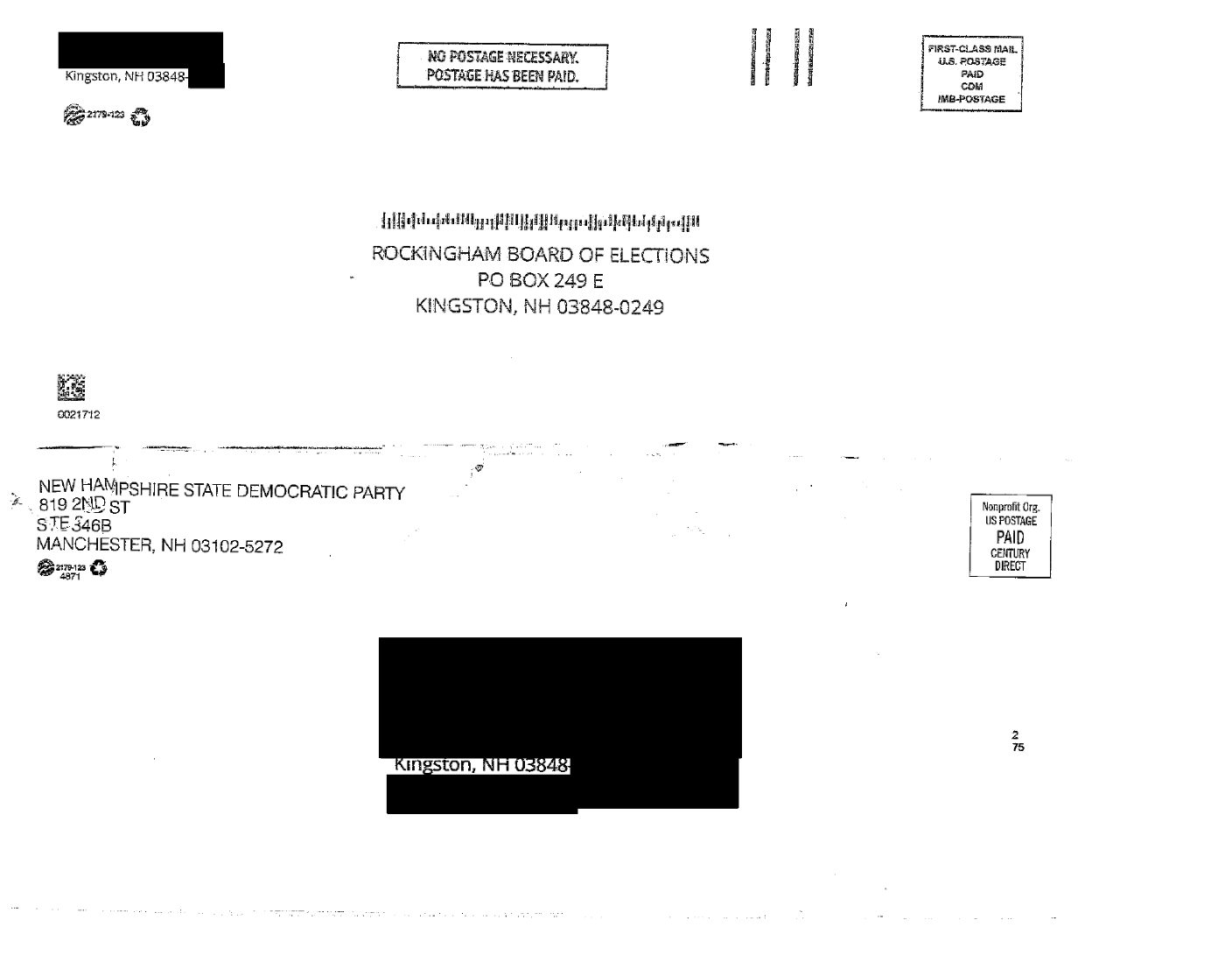 Editor’s note: NHDP Executive Director Troy Price said: “This was a regrettable clerical error made by a mail vendor with the intention of ensuring every Granite Stater was able to cast their ballot in this year’s general election. The NHDP has been transparent about the issues with this mailing and have been working with the Attorney General’s office to remedy the situation. We have already taken steps to contact the voters affected, and we expect to have this issue resolved shortly.”

Some of the concerns raised about these mailers are that the mailer states, “You have a history of requesting absentee ballots” when the voter has not voted by absentee ballot in the past, the voter’s domicile address is listed as a town or city in which they do not live, the return envelopes are addressed to “[County Name] Board of Elections” which are entities that do not exist, and the return envelopes have incorrect addresses for the Clerks.

This erroneous information involves 39 towns and cities and affects 926 voters.  Information was provided to the Secretary of State’s Office and the Attorney General’s Office by Town Clerks and concerned voters.

The NHDP’s mailer, with incorrect return mail addresses and voter domicile information, is causing voter confusion and frustration.  The return mail addresses on the mailer are likely to mislead voters into unintentionally violate RSA 657:6. It could also disenfranchise some voters in that voters may complete the absentee ballot applications, believing they will receive absentee ballots for the State General Election, only to discover that their applications were never delivered to their Town or City Clerks.  This discovery could be made at a time when the voters are not able to file follow-up applications for absentee ballots.

Additionally, given the already heavy burden on Clerks’ offices around the state, Clerks have limited resources to determine which town or city the forms used by voters should be forwarded to.  However, after ensuring that the forms are delivered to the correct town or city, we will instruct Clerks to accept these absentee ballot applications despite not being correctly addressed and directed to their offices.

The Attorney General’s Office thanks the public and the State’s election officials for their diligent review of the political mailers they have received during this general election cycle and for the numerous contacts providing it with copies of the NHDP’s mailers.  Attorney General Formella requests that the public continue to provide information regarding political advertising and mailers they find concerning.  Please provide those copies and emails, including the date when a mailer is received, to our email address:  electionlaw@doj.nh.gov