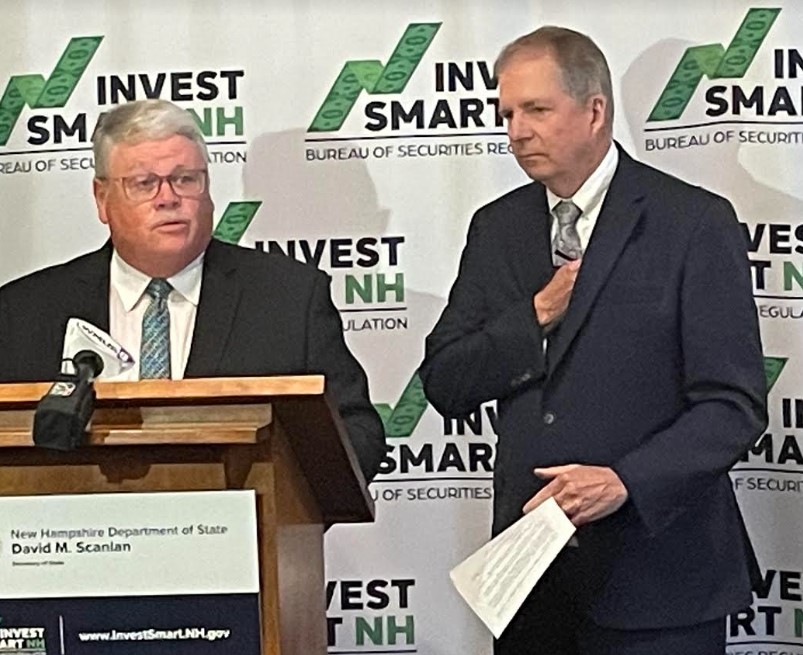 CONCORD – Investor literacy is the goal of a new state initiative aimed at educating the general public on how to safely grow their money.

A free, 68-page book, “New Hampshire Investor Guide” published in both English and Spanish, was unveiled Thursday by the Secretary of State’s office complete with a glossary with definitions for “glide path,” “load” and “expense ratio” that can make many novice investors’ eyes roll when they meet with a broker for the first time.

The investor guide is also available online at https://www.investsmart.nh.gov/ or can be ordered by calling 603-271-1463. There is no cost.
Secretary of State David Scanlan, together with his director of the Bureau of Securities Regulation, Barry Glennon, hosted a joint press conference to unveil the publication.

This is the first time such a book has ever been put together by the state.

There have been brochures in the past but this is the first comprehensive publication for avoiding financial fraud, Scanlan said.

Glennon said that investment fraud has been increasing in recent years.

Most notable was the FRM Ponzi scheme which left investors robbed of millions of dollars. A $10 million fund was voted in by the legislature and signed by Gov. Chris Sununu to help victims recoup some of their money.

The attorney general has refused to identify who will be receiving money from the fund.

The new book, Scanlan said, is targeted at the average citizen who wants to invest for retirement, savings, or for sending their kids to school.

The Bureau of Securities, he said, has been on the front lines of protecting investors and Scanlan said he believes that educating people at the front end will reduce the losses and work that the state would have to do prosecuting the criminals.

“If we can help those individuals understand how to identify potential scams and fraudulent activity, we can avoid some of the enforcement actions on the other end,” Scanlan said.

Glennon said the idea came through discussions with Scanlan, who recently took the position as Secretary of State but was deputy for many years.

He called the new website and publication “investor centric” which can be understood by both new and seasoned investors. It shows how to make smart decisions and also how to select an investor professional.

“As you explore the website, it is very intuitive,” he said.

The website will also provide information on customer complaints and enforcement actions so people can be in an informed spot before investing with any group or individual.

The state has about 2,500 licensed brokers in-state but over 130,000 in total, with the majority out-of-state.

He said the golden rule is if you do not understand the risks and benefits of investment, you need to hesitate.
The guide offers information about schemes and scams and the traits of a typical perpetrator.

It notes that churches, community organizations, and retirement communities are fertile ground for scam artists, who may act as a member or leaders.

It notes that private oil and gas offerings are highly speculative.

“Cryptocurrency offers are extraordinarily volatile – meaning risky – and almost impossible for a layperson to understand,” it reads.

Scanlan said the initiative will include presentations to groups around the state.