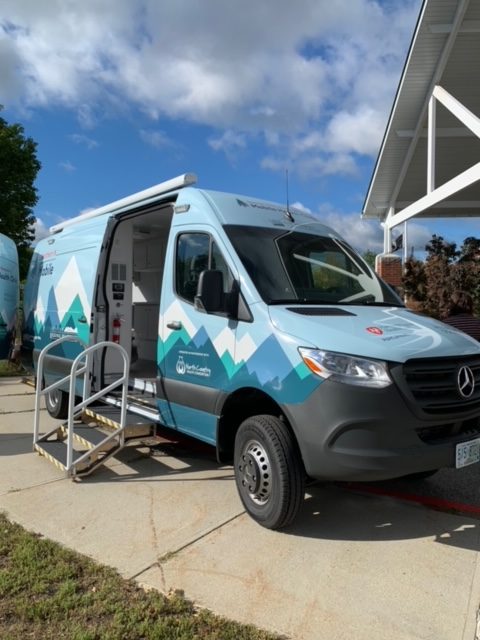 LITTLETON – Rural residents in Coos and Grafton counties will soon have access to a mobile health clinic, the culmination of more than a year of planning.

Lauren Pearson, executive director of the North Country Health Consortium, which will have ownership of the van, said, “One of the Consortium’s most valuable assets is our partners and our external shareholders. Together with our community members, we are seeking input from those who deeply understand the health disparities that exist in our region.”

James Potter, the executive vice-president and chief executive officer of the NH Medical Society, said he originally proposed having a traveling health van during the early days of the coronavirus pandemic.

“The pandemic was exposing a lot of weaknesses in getting people to clinical facilities in various areas, particularly the North Country,” Potter said in a telephone interview ahead of the program’s launch. It was a problem not only in the North Country, but also in pockets of the state such as southwestern New Hampshire, “and even within some cities, like Manchester,” he recalled.

The clinic takes the form of a customized Mercedes 3500DX 4×4 sprinter van, designed specifically for clinical services and to navigate North Country winters. It is extra tall and extra long and has four wheels on the back that can take studded tires.

Potter noted that the van will not serve as a transport vehicle, but it is equipped with an examination bed, a wheelchair lift capable of handling large people, two refrigerators for vaccines and medication, as well as employees’ food, and standardized examination equipment, along with Life Pacs holding critical lifesaving medical supplies. It also has enhanced WiFi capabilities for the sharing of medical records and TeleHealth capabilities, including linking to Dartmouth Health.

“Once we learn if there’s some dead spots up there, we’ll explore does a satellite phone or hookup make sense,” Potter said.

Grants will allow the van to offer many of the clinics at no charge, and the collaboration between the four hospitals, North Country Health Consortium, Point32Health (Harvard Pilgrim Health Care), local businesses, foundations and agencies, and the New Hampshire Medical Society raised $1.1 million so far to help make the service sustainable over the long term.

In sharing the van, Littleton Regional Healthcare, Weeks Medical Center, Upper Connecticut Valley Hospital, and Androscoggin Valley Hospital will pay a per diem use fee to support the program. They also will provide the staff for the clinics they sponsor.

“If we can keep it in the field 180 days out of the year, then we can extend essentially the full funding of this for between five and six years with no additional loan or new funding,” Potter said. “The thing that’s gotten in the way of these kinds of programs is funding runs out; they’ve got one funding source and when the funding runs out, the project runs out. Because this is such a collaborative effort, we have many different partners.”

The mission of the program is not to charge for the clinics, but if people have insurance or Medicaid and make use of certain services, those charges can be billed. Home health care is a potential area where the van can assist.

Dr. Bill Brewster, then-vice-president of Harvard Pilgrim, took up Potter’s idea for a mobile health clinic and, before he retired in September 2021, “literally his last act was to have their foundation offer a half-million-dollar matching grant to develop this for Coos and northern Grafton counties,” Potter said.

“We initially wanted the [NH] Regional Public Health Networks to take it over but because of some management changes they weren’t able to do so at that time,” he said. “So the Medical Society, through our foundation, essentially took over the job.”

Working on the project since last August, doing fundraising and planning, they established the connections necessary to make it happen. The four hospitals agreed to provide $50,000 each, and the North Country Health Consortium also kicked in support.

The Department of Agriculture provided a $281,000 grant to help underwrite the vehicle, and the group also received money from the NH Charitable Foundation, NH Department of Health and Human Services, and Fidelity Investments.

“This is very different, that you have such an eclectic type of response to help,” Potter said.

The Consortium has agreed to take ownership of the van and serve as its operations agent.

“In a few months, we’ll be reaching out to everybody … and getting their input,” Potter said. “We think that’s really the key.”

He envisions having senior centers, community centers, churches, and other gathering spots request the van as a supplement to their activities. Sometimes someone will show up at one of those events with obvious medical problems that may be referred to the Consortium.

In addition to the clinical equipment that the van will carry, there is a tow hitch that will allow the van to pull a trailer for dental clinics at schools or other specialized screenings.

“We’re going to be exploring over the next six months, maybe some more, the full scope of how this vehicle, this tool, can really be used,” Potter said.

Kate Skouteris, vice-president in New Hampshire of Point32Health, said, “Increasing access in rural communities is important … to try to break down those barriers to health care and address some of the health disparities that we see across New Hampshire.”

“This has been a real labor of love,” Potter concluded, relating it to the mission originally identified by Dr. Josiah Bartlett in 1791. “He’s one of the kind of founding fathers in New England, and in the Granite State, the first elected governor. So it’s kind of fun to take his aspirations and help communicate them and translate them in kind of real world ways.”