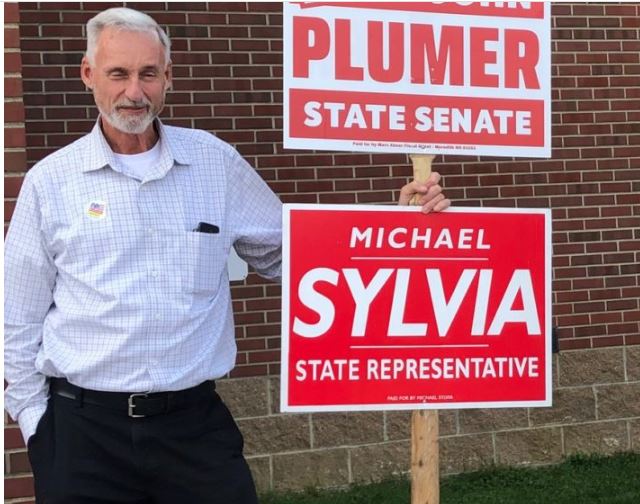 LACONIA – With over 500 lawn signs placed across the county urging voters to reject Free Staters and Libertarian “extremists” from the House of Representatives and county leadership, members of Citizens for Belknap were expressing gratitude to voters for unseating a number of Republican legislators in the state primary Tuesday.

The political action committee organized after Gunstock, a county-owned recreation facility, closed when its senior employees quit citing the toxic work climate caused by House members trying to control operations there. The employees returned two weeks later when their demands that Gunstock Area Commissioners placed on the board by the extremists were gone.

Free Stater state Rep. Mike Sylvia, R-Belmont, who sponsored a bill seeking a vote for New Hampshire to secede from the United States and who until recently chaired the Belknap County delegation, is now a lame duck.

Sylvia was defeated for the Republican nomination in the District 4 primary by Travis O’Hara.

Some saw Sylvia as the leader of the extremist group which also included Republican incumbent state Reps. Norm Silber, Glen Aldrich and Gregg Hough of Belknap District 6. They, too, were eliminated by voters in Gilford, Gilmanton, and Laconia while results were incomplete in some other Belknap County districts.

Alan Posnack, chairman of the Citizens for Belknap said “the voters woke up…got mobilized, got educated and spoke very loudly,” at the ballot box Tuesday.

State Rep. Harry Bean, R-Gilford, who had in the past sided with Sylvia on a number of occasions but organized an emergency vote which brought back Gunstock employees, was endorsed by the Citizens for Belknap and won.

The organization now plans to work on a voter’s guide for the General Election.

Gov. Chris Sununu, a fellow Republican, had called out Sylvia and several other Republicans in Belknap County saying the voters should get rid of them.

Sylvia said that the Citizens for Belknap represented a vocal minority of the county’s voters.
Sylvia could not be immediately reached for comment.

Posnack said he had “nothing to say to him,” meaning Sylvia. “The voters have spoken.”
In a statement by Posnack, “The vote margins show a resounding repudiation of the Free State extremist chaos and damage to our county government and an embracing of candidates who will return us to sensible governing.

“While we are encouraged by the primary results, there is still work to be done to sweep out the remaining extreme candidates in the general election on Nov. 8th.  Then begins the hard work of restoring our county government to serve the will of the people, which includes allowing Gunstock to thrive, our county nursing home to fully serve its patients, and sensible funding for the county’s many functions.”