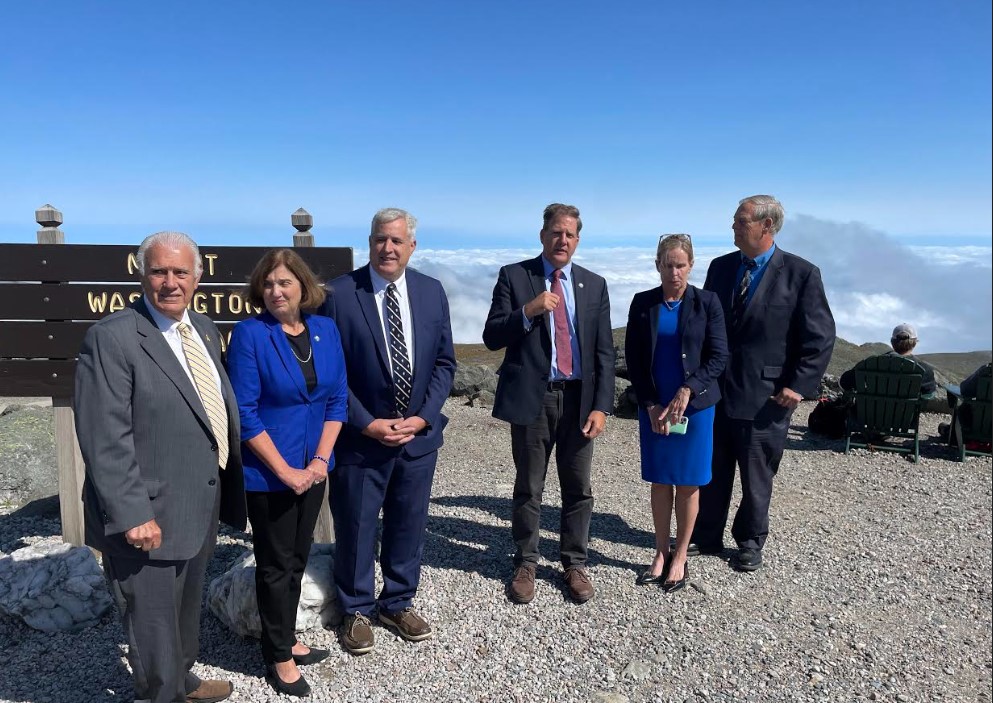 SARGENT’S PURCHASE – High above the clouds at 6,288 feet, the Governor and Executive Council met for the first meeting in state history atop Mount Washington Wednesday and voted to approve a number of contracts.

Executive Councilor Cinde Warmington, a Concord Democrat however, urged Gov. Chris Sununu to use collective bargaining for state workers instead, noting there are vacancies in just about every aspect of state government and it is becoming an issue of public safety.

The Consolidated Recruitment and Retention Initiative, Sununu said, is critical and helpful now as the state competes with other states and the private industry for workers.
The temporary funds through June, 2023, will be of great benefit to employees who are facing inflationary spending, councilors noted.

HISTORIC VISIT TO THE ROCK PILE

Every summer, each of the five Executive Councilors gets to host a meeting in their district. The intent is to expose each commissioner and department head to another part of the state, honor locals and get them to understand the executive branch of state government.

Executive Councilor Joe Kenney, R-Wakefield, chose Mount Washington State Park for his pick this summer and noted at the breakfast meeting at The Glen House in Gorham that he did not know why the legendary District 1 Councilor Ray Burton had never chosen the top of the rock pile for his meeting.
“Because he was reasonable,” quipped Executive Councilor Ted Gatsas, R-Manchester, to laughter.
The meeting was historic and picture perfect weather greeted the councilors.

HIKERS TO THE MEETING

Most of the meeting attendees got to the summit by the Mount Washington Auto Road in eight lined up “stage coaches” outside the hotel, built in 2018 at the base of the Auto Road.

Some, including the governor, took their own vehicles for the half hour ride through the clouds, about 7.6 miles long to break through the clouds at about 5,000 feet to see sunshine, floating clouds and the peaks of Mounts Monroe and Adams.

Known as the home of the world’s worst weather, and the 90-year-old Mount Washington Observatory, the 70-acre park at the summit is the highest point in the Northeast.
The wind, clocked at 231 miles per hour in 1934, was decidedly calm Wednesday with about 11 miles per hour of wind. It allowed the council to take a photograph without jackets, and they toured the observatory summit building.

The exception to the primary mode of transportation to attend the meeting was Commissioner of Education Frank Edleblut, together with three other state officials from the departments of Health and Human Services and Education who hiked to the summit in three hours from the East side.

Edleblut took a selfie at the summit with fellow hikers Morissa Henn of DHHS, Melissa White of NHED and Nathan White, CFO of DHHS and shared it with InDepthNH.org.

He said they began at 6 a.m. and hiked steadily and broke through the cloud cover near Appalachian Mountain Club’s Lake of the Clouds Hut, at about 5,000 feet and enjoyed the remaining half hour hike to the summit with a 90-mile view above the clouds.

With the sunny undercast as the backdrop for the meeting, Sarah Stewart, commissioner of Department of Natural and Cultural Resources, welcomed all to the park and said that it is important for every citizen to know this is their park.

A new master plan now in its draft phase, looks to assess the environment and will seek to ensure equal access for the disabled, she said.

Gatsas brought a gift to the summit at the urging of his wife Cassandra. It was actually a set of cat treats from his three-legged cat “Ruby” to the Mount Washington Observatory’s cat, “Nimbus” who lives year-round at the summit.

The cat did not make an appearance at the meeting but hundreds of passengers from the Cog railway strode through the meeting, along with a number of hikers and people from around the world who took their cars up the road. The governor was interrupted at times by the Cog’s lengthy whistle and loud speaker announcements that the iconic train was leaving the summit.

The meeting was held in the Sherman Adams lodge, which is owned by the state.

The 10 a.m. meeting began with a pledge of allegiance led by Vietnam Veteran Frank McCarthy; a prayer from Pastor Tanya A. Tupick of the Harvest Christian Fellowship Church in Berlin; and a presentation by artist Debbie Aldrich of Randolph.

Sununu also gave commendation and recognition awards to Selectman Mike Waddell of Gorham; Linda Cushman of Jefferson, its deputy town clerk; and Howie Wemyss of Randolph of the Mount Washington Auto Road, who is retiring.

Commissioner of Safety Robert Quinn was asked by the governor to address recent fatalities.

“We are frustrated,” Quinn said, noting nine people have lost their lives in recent days. “We can’t arrest our way out of it,” he said noting the reason is often “people making just bad decisions. Impairment, speeding and distractions…they are taking risk. They are taking risky behavior.”

Noting that people understand risks on the auto road but on the average road they are less focused at times.

“You have to be a responsible driver,” Quinn said.

Federal American Rescue Plan money will be available for helping folks shelter from the cold this winter.
Working with regional Community Action Projects or CAPs, these temporary shelters have not yet been identified for locations but will be soon, the council was told.
The council voted to authorize to accept and expend the federal funds to support emergency shelter and homelessness initiatives during the winter of 2022 and 2023.

The authorization is still contingent on Legislative Fiscal Committee approval, which will be on its Sept. 9 agenda.

There were 557 applications from 216 schools in the first round, with an opportunity to apply for the second round of funding.

Warmington asked how much was available in the second round and was told about another $10 million is available.