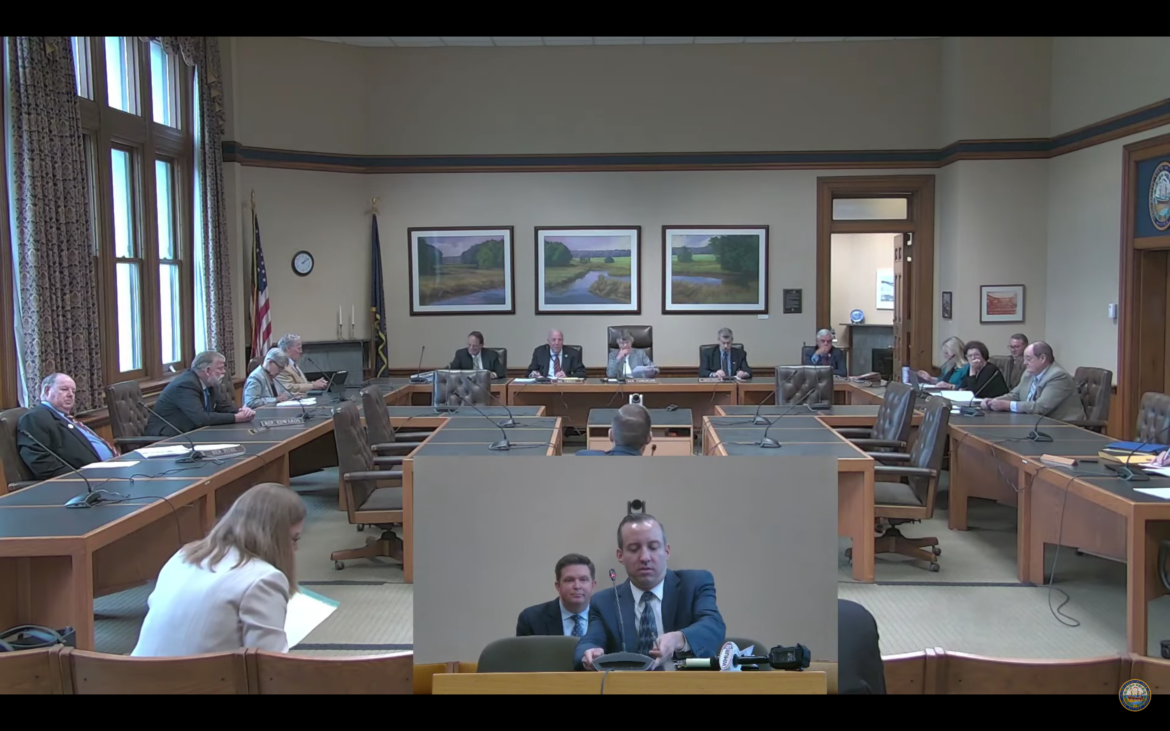 Attorney General John Formella is pictured speaking to the Joint Legislative Fiscal Committee Tuesday about the plan to settle claims with YDC victims.

CONCORD — The rules and guidelines for determining awards to abuse victims held as juveniles at the Youth Development Center were approved by the Joint Legislative Fiscal Committee Tuesday.

Attorney General John Formella withdrew his original proposal last month after lawmakers criticized the plan to distribute $100 million in settlement funds to the victims based on types or abuse and frequency, saying it did not supply adequate compensation, lacked a comprehensive notification process, and was overly complicated and difficult for victims to navigate without an attorney.

The revised program presented Tuesday received a better reception with several committee members saying nothing is perfect, but it would provide a reasonable path to closure for many abuse victims without having to go through the costly and time-consuming court process.

“This is a reasonable way to proceed and bring closure to a number of people,” said Senate Majority Leader Jeb Bradley, R-Wolfeboro, “who unfortunately, going through the court system will not work for them.”

However, the three Democrats on the 10-member committee voted to reject the revised plan saying the proposal is still difficult for victims to navigate, does not properly acknowledge the trauma the abuse inflicted, and will compensate most victims well below the statutory cap of $1.5 million.

They also said the award process discriminates based on the victim’s gender and provides less compensation to victims raped over a shorter period of time than for those raped over a 12-month period.

“This process is simply too important to get wrong,” said Senate Minority Leader Donna Soucy of Manchester, Deputy Senate Minority Leader Cindy Rosenwald of Nashua and House Deputy Minority Leader Mary Jane Wallner of Concord in a joint statement. “We simply cannot accept a proposal that continues to prioritize the state’s financial and legal interests over providing these victims with some small measure of justice.”

Under the revised plan, the methodology to determine a victim’s compensation was changed to shorten the timeline of abuse needed to reach the statutory cap and to increase the rewards for repeated incidents of abuse.

Formella said those changes were done after discussions with attorneys representing some of the victims and who generally viewed them favorably.

“This process is not perfect, . . . but as we sit here today,” Formella said, “we can have productive discussions about who the administrator might be — I’m not prepared to name names today — but I am confident if (this is) approved, we will come to agreement on who the administrator will be very quickly.”

Attorneys for the two law firms representing about 98 percent of the potential claimants said the attorney general never reached out to them before making his revised proposal.

David A. Vicinanzo of the Manchester law firm Nixon Peabody LLP said the Attorney General’s Office has not reached out to discuss the guidelines or methodology for determining awards for months.

“The OAG (Office of Attorney General), representing the state government which caused the worst child abuse in state history, decides all by itself what remedy to impose without negotiating with the actual child victims it harmed,” he said. “And then, shamelessly, says it is ‘victim friendly’ when none of the victims agree.”

Who has ever heard of a settlement process that was not negotiated with the victims, he asked, noting such an agreement will never work because it is not fair or honest.

“The state abused these folks as kids,” Vicinanzo said. “Now it’s abusing them again by playing political spin games, pretending this is a victim-friendly process while ignoring and disrespecting the actual child victims.”

Formella said: “We reached out repeatedly to Nixon Peabody and Rilee during the first phase of drafting the Claims Process and received nothing constructive in response. During this second phase, we chose instead to work very closely with the other claimants’ counsel who were willing to engage with us constructively, and the Claims Process is better for it, as demonstrated by the support of those counsel and the Committee’s approval of the revised process today.”

Vicinanzo responded: “Attorney General Formella’s refusal to negotiate throughout this process with the lawyers representing 98% of the claimants has ensured that the YDC Settlement Fund will be exactly what we told them it would be: a total failure.  The lack of empathy for the victims and the lack of good judgment are disappointing. Our clients will not be told by Attorney General Formella what their claims are worth – we’re going to ask  juries do that.”

He said they divided the packet into four separate documents to make it easier for claimants to understand and use.

Along with changing the methodology for determining a victim’s award under the program to make it easier to reach the statutory cap, they also made clear current residents of the Sununu Youth Services Center are eligible for the program.

Formella said the administrator will be a neutral third-party who will help claimants explore their options once they receive a proposal from the state.

The administrator will also be able to suggest program changes to the fiscal committee and the legislature, he said, predicting the administrator’s office and the outside legal firm to be hired will use about $4 million of the $100 million approved for the settlement fund.

Another major change is not requiring certain information to be included in the claim form. Formella said that does not mean the information will not be needed at a later date for verification or identification but is intended to work as a road map to a stronger claim for the victim, he said.

The original proposal included required information to be provided with the claim.

Formella said not requiring additional information at the beginning of the process should be a little less overwhelming for victims.

“There is no perfect way to do something like this . . . to compensate someone for sexual or physical abuse,” Formella said. “There is never a perfect way to value the compensation someone receives for that type of harm.”
Although the proposed package was approved, lawmakers continued to raise some concerns such as the likely different compensation levels for rape for males and females.

Rep. Robert Lynn, R-Windham, noted in some circumstances the same level of sexual abuse is treated differently. “I’m not sure I have a good solution to that.”

Formella said that is something the administrator would consider and may come to the committee for further consideration.

Soucy noted the attorney general’s unique situation as the office investigating and will prosecute some of the abusers who worked for the state and at the same time is overseeing the civil settlement for the victims.

She questioned if the information gathered from one area would be used in the other, but Formella said it is common to have a wall between investigations in his office, to keep the two separate.

He noted a defendant has rights to some information that could be gathered from victims, but his office would do everything it could to protect that person’s privacy.

That prompted Rep. Jess Edwards, R-Auburn, to voice concerns if the privacy statement is sufficient and suggested the attorney general may want to include more specific language.

Formella said he believes the privacy statement in the documents is sufficient to protect the victims.

Concerns were also raised if state prisoners would be able to access the settlement program while prohibited from using the internet, which would prevent them from filling out forms electronically and also possible calls to attorneys.

Formella said he and corrections commissioner Helen Hanks are working on resolving the issues.

Others were concerned about prisoners in county jails being notified and able to participate in the program, and Formella said he would contact the county facilities to discuss that.