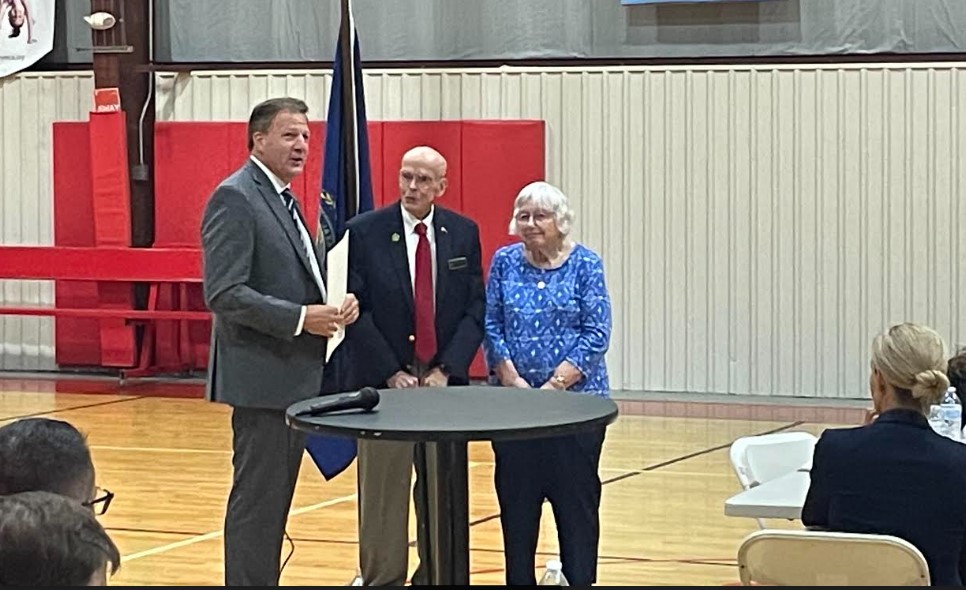 Gov. Chris Sununu honors state Rep. Norm Major, R-Plaistow, and his wife of 61 years, for their work on behalf of the community and Republican party at the Executive Council meeting Wednesday in Plaistow.

PLAISTOW – Proposals for the purchase and redevelopment of the former Laconia State School are coming into the state. Gov. Chris Sununu and the five-member Executive Council expect they will soon be able to consider several offers before deciding which to select.

Sununu and the Executive Council met at the Plaistow YMCA Wednesday and also discussed an emerging threat in the state: the drug “purple fentanyl” and the threat it poses to people thinking they are getting another drug and potentially becoming addicted.

At the meeting, the governor and council offered three commendations.

Woodbury Middle School of Salem was honored as one of the state’s institutions which “went above and beyond” during COVID-19 crisis when it implemented a hybrid model of education to meet the needs of its students and their safety during the pandemic and provided a “safe and calm learning environment,” Sununu said.

They also honored Steven Lewis of Atkinson, owner of Lewis Builders, for his efforts to develop workforce housing. The state currently has a crisis in lack of rental housing, particularly for low- to moderate-income residents.

“You and (Executive Councilor Janet) Stevens have made workforce housing an acceptable thing,” Lewis said to the governor.

He is chair of the House Ways and Means Committee, and she has worked for years to support efforts in their community and the Republican party, Sununu said.
Sununu said there is “rumor of the word ‘retirement’ which is a joke.”

He praised both Majors for their lifetime of service to their community.

The meeting, one of a series of annual summer meetings on the road, was hosted by District 3 Executive Councilor Janet Stevens, R-Rye. Each of the councilors from the five districts gets to host a meeting.

The next one in three weeks is to be atop Mount Washington and another one in September is scheduled for the airport in Jaffrey.

About a year ago, Sununu directed Commissioner of Administrative Services Charlie Arlinghaus to sell the former state school property as-is, with its aging brick structures and open fields with sweeping views of the Lakes Region.

The city of Laconia would then be able to put the property on its tax rolls, easing the burden of taxpayers.

“From the beginning we have said this is a piece of property with enormous potential,” Arlinghaus said.

The state hired a firm to market the property and he said that he expects “that we are going to get a few – three to five – ” conceptual offers, when the deadline for submissions comes on Aug. 19.

The governor and council will be the final deciders on the proposals but it is a complicated and atypical sale of state property, Arlinghaus said.

“There will be initial numbers, proposals and thoughts,” on what the property would become, he said.
“What we would do next is we would then talk to you,” he said to the council “and we would have…discussions with lawyers about how we can involve other parties.”

Sununu said he would like to engage the city, county and others as much as possible in the sale.
Arlinghaus said all potential buyers have been simultaneously talking with the city and he stressed it is a “team effort.”

Executive Councilor Joe Kenney, R-Wakefield, whose district includes Laconia, said it was his understanding the concept for proposals would ultimately be whittled down by the department to offer a few of the best ones.

Arlinghaus noted that the council may need to be aware of all competing proposals.

FENTANYL
Sununu said there is a new and highly lethal strain of fentanyl being identified in the state and the lingo on the street is that it is called “purple fentanyl” because of its color.

In a press briefing following the meeting Sununu said, “It’s much more powerful than normal fentanyl. It requires three to four times the amount of Narcan to revive folks and it is something we are seeing here on the streets of New Hampshire and it is extremely, extremely concerning because of its purity and its power.”

It comes at a time when parents are preparing to send their kids back to school.

He said the fundamental change in the opioid crisis in the state is that it is “no longer just a user’s market, it is a cartel-driven market. This is a game changer over the past year. The southern border is wide open. The purity of these substances is huge, the ability to mix and willingness to mix these substances with marijuana, Adderall pills for kids, Xanax for adults, whatever it might be they are mixing the fentanyl in there knowing that they risk killing the individual, but they are also more likely to get an addict out of it.”

The governor defended his decision to veto legislation allowing for recreational marijuana sales and said that the state has had better health statistically compared to other states that have legalized it.

New Hampshire is the only one of its surrounding states which has not legalized recreational marijuana.

Some have argued that buying it from a dispensary is safer than buying it on the street but Sununu said he feels comfortable keeping New Hampshire out of the legal weed world.

Paul Raymond Jr. of Concord was nominated to the position of Assistant Commissioner of Corrections.

DOVER REVITALIZATION TAKES A STEP
The council authorized the city of Dover’s request to perform work on the Cocheco River in Dover which includes dredging and is meant to be part of an economic revitalization plan that would allow boats to come into the downtown.