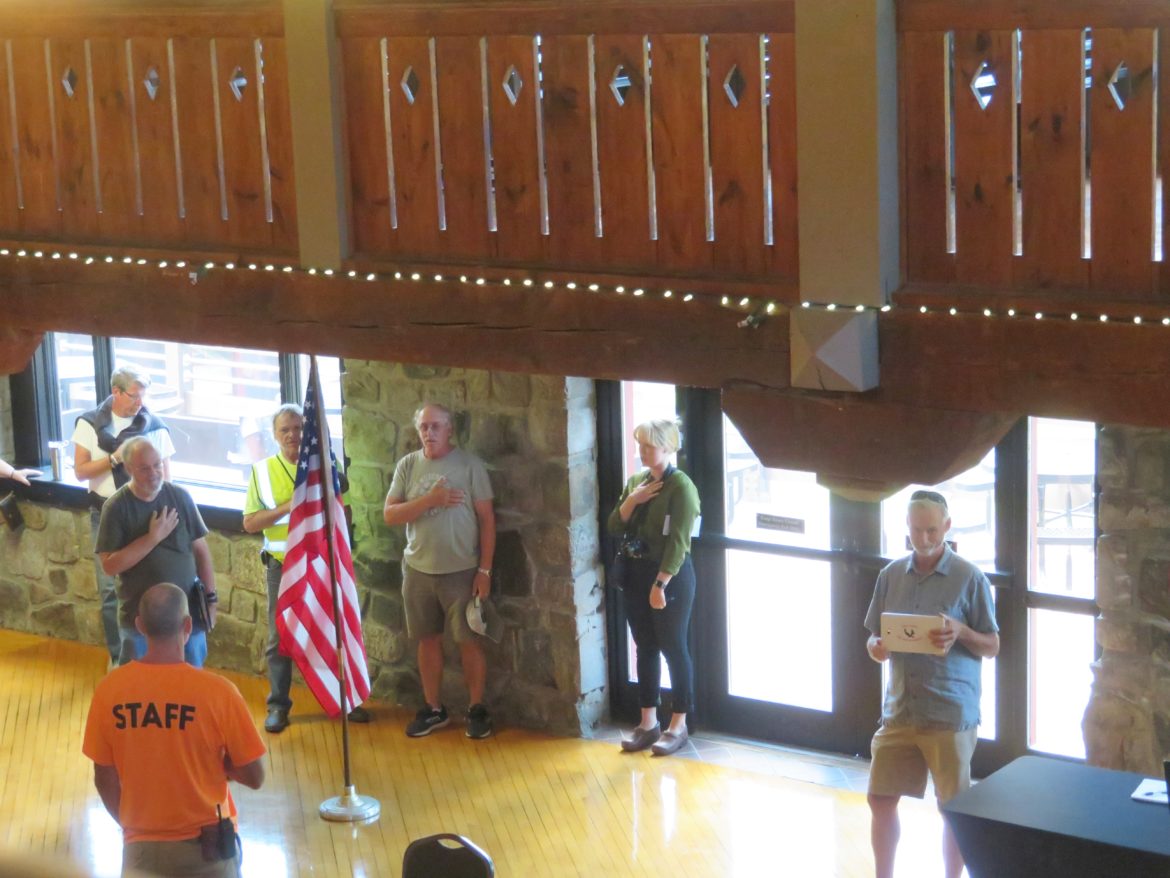 State Rep. Mike Sylvia, R-Belmont, is pictured at right during the Pledge of Allegiance at Monday's meeting of the Gunstock Area Commission. The picture was sent to InDepthNH.org by Alan Posnack, who is active with the Citizens for Belknap group.

BELMONT – Citizens for Belknap, a new political action committee, plans to endorse candidates for the Sept. 13 Republican Primary as early as this Sunday.

This comes while residents of the county are questioning why state Rep. Mike Sylvia, R-Belmont, a Free Stater who is chair of the Belknap County Delegation, didn’t pledge allegiance to the flag Monday at the opening of a Gunstock Area Commission meeting.

While others around him had their hands on their hearts and recited the pledge to the United States, Rick Zach, a member of the audience asked Sylvia why he did not pledge allegiance.
He did not answer but stood appearing to record the meeting.

Doug Lambert, chair of the GAC meeting said that personal attacks were unwarranted.

Attending the meeting were about 75 people. Others at the meeting also called out Sylvia for not pledging and after the meeting, some asked why he should continue to serve his district, which is part of the union if he does not support it.

Sylvia was the lead sponsor of a failed constitutional amendment for New Hampshire to secede from the United States.

Secretary of State David Scanlan said New Hampshire is not a “recall state” and there are no provisions for politically removing an elected leader from office. He said that differs from felony provisions in which a crime has been committed and a person is adjudicated.

Scanlan said the remedy the state has is two-year terms for elected legislators and people can be voted in or out of office.

Alan Posnack, chair of the grassroots group that is working on the endorsement list on behalf of the Citizens for Belknap, photographed Sylvia not pledging allegiance Monday and provided a copy of it to InDepthNH.org.

Posnack would not say who the group would be endorsing, but said he hopes to have the endorsement information up on its website at the end of this week in time for voters to consider “new leadership” in Concord and those who hold the purse strings to Belknap County, with a budget of over $31 million which they control.

The county delegation is made up of 18 all-Republican House members.

Posnack said his organization enjoys “huge support” within Belknap County, contrary to what Sylvia, who is running for a sixth term, wrote on his blog.

Sylvia wrote that the group represents “a small minority, desperate to distract you,” from the Biden Administration’s inflationary missteps and he called them the same “progressives” who would outlaw single-use plastic.
Posnack offered a different characterization of his group.

“We represent a majority of the citizens of Belknap County who are damn angry with the delegation,” Posnack said.

The group supported workers at the county-owned Gunstock recreation area who resigned July 20 saying they were being micromanaged and belittled by a group of political extremists, who are libertarians and Free Staters who have hijacked county government with their views and plan to lease Gunstock to the private sector.

The group has vowed to vet all candidates and Posnack said it comes down to the question of “whether they are helpful or harmful” to the citizens of the county.
Posnack noted there are six Republican primaries including one for Sylvia’s seat challenged by state Rep. Travis O’Hara, who is an incumbent in a redistricted district.

There are no Democratic primaries for the legislature in the county but there are Democratic candidates for all seats awaiting the winners of the Republican primaries to go to the voters in the November general election.
Belknap is the only one of 10 counties in the state that is represented 100 percent by Republicans.
It has been heavily Republican for many years and some have served for many decades.

A voter’s guide for residents in all 10 towns and the city of Laconia will be available from the PAC on its website by at least next week, Posnack said.

In a blog Sylvia wrote on Aug. 8 entitled “Extremists,” which ran as a letter to the editor in the Laconia Daily Sun, he mocks the political lawn signs that have popped up across the county related to the walkout of key staff at Gunstock.

“They lack the self-awareness to see the irony of the mess they create,” Sylvia wrote of the citizens who have shown up in large numbers at Gunstock meetings.

Almost half of the legislative delegation, all of whom are running for re-election including Sylvia, did not attend an Aug. 1 emergency vote to reopen Gunstock, called by state Rep. Harry Bean, R-Gilford.
Gov. Chris Sununu has called “shameful” the legislators who were no-shows at the emergency meeting, noting it makes it that much easier for the residents to vote them out of office.
Sylvia did not attend and argues the meeting was illegal.

He has also held out evidence of past political donations sent to Sununu’s campaigns on Gunstock Area Commission accounts signed by General Manager Tom Day and noted an audit, with more details of Gunstock books is underway but has not been released.

When asked if the two checks, one for $500 and one for $1,000, were legal contributions to Sununu’s campaigns considering Gunstock is owned by Belknap County, Attorney General John Formella’s spokesman Mike Garrity said:

“The Attorney General’s Office will not be commenting on matters involving Gunstock/the Gunstock Area Commission at this time, as the New Hampshire Department of Justice has recently received various pieces of information regarding Gunstock that we are currently reviewing to determine appropriate next steps.”

Sununu said it was his understanding that his campaign could take the money legally from Gunstock and that they would be willing to return it if asked.

A link to Sylvia’s blog “Extremists” https://mikesylvia.org/?cat=5 is here.
A link to Citizens for Belknap is here https://www.citizensforbelknap.org/