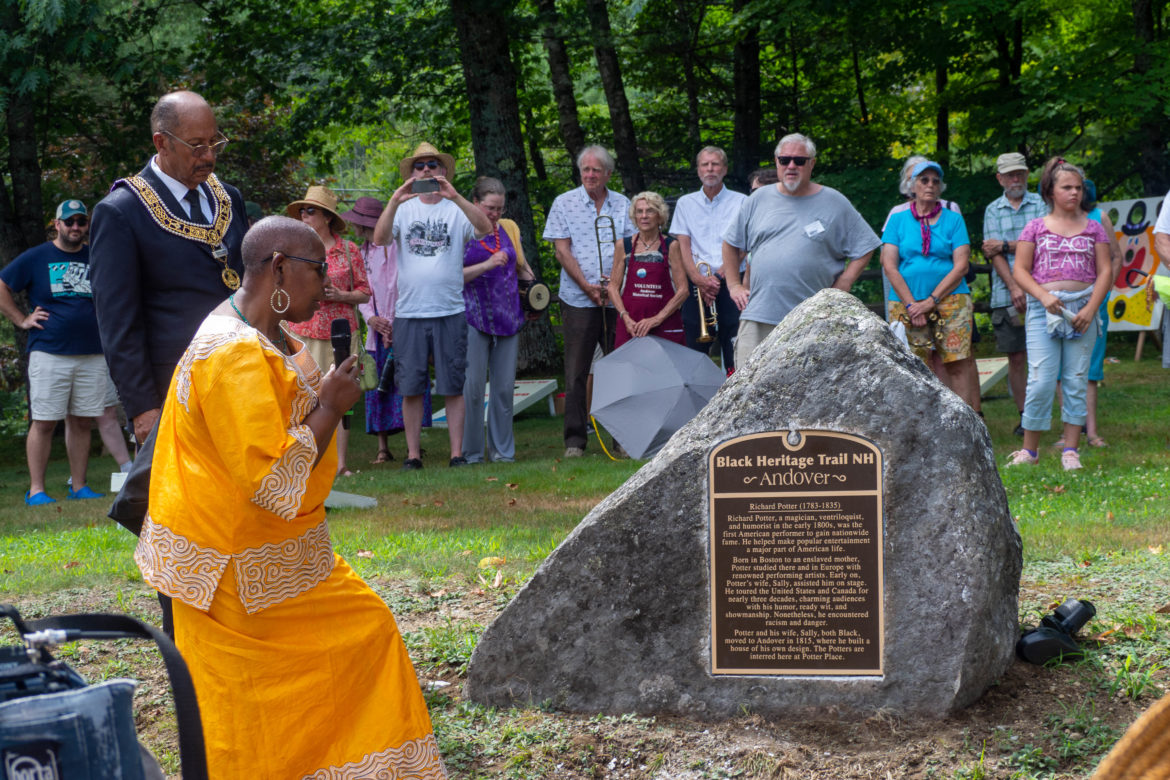 ANDOVER — As of Aug. 7, there’s another reason to visit the village of Potter Place in the town of Andover: a Black Heritage Trail plaque in honor of the village’s namesake, Richard Potter.

If the name is unfamiliar, you are no doubt living in the wrong century.  Potter, who lived from 1783 to 1835, was one of America’s first celebrities, a status he earned by traveling the country performing magic and ventriloquism.  That he was a Black man who performed in every state makes his story that much more remarkable.

“He went everywhere,” said John Hodgson, author of Richard Potter: America’s First Black Celebrity, a speaker at the dedication ceremony sponsored by the Andover Historical Society.  “He travelled around the entire country as it then existed, between 1819 and 1823,” offering performances in big cities and small towns.  “And when he went everywhere, he also performed to all audiences. And this was extremely unusual then.”  According to Hodgson, Potter was the most widely seen entertainer of his time.

Born the son of an enslaved woman in Massachusetts, Potter was performing in circuses and learning the magic trade in England by his early teens.  By 1811, he was performing on his own back in the United States.  According to the Andover Historical Society, “Richard had often performed at Benjamin Thompson’s tavern in Andover and liked the area and the people. He purchased a 175-acre farm in 1814 and built a home that became a showplace. The neighborhood soon became known as ‘Potter’s Place.’”

As for how he earned his fame, Hodgson said, “We have to begin with his expertise.”  Addressing about 100 people dodging the sun under a tent or grabbing patches of shade by the old Potter Place train depot, Hodgson emphasized, “He was expert. In magic, in ventriloquism, in one-man theatrical entertainments, he really had no peer at that time. He was assiduous in his honing of his skills; he was extraordinarily good at all of them.”

He was also a Black man in a country where slavery was legal, even in New Hampshire.  The year of Potter’s death, 1835, is also noteworthy for the destruction by local racists of the inter-racial Noyes Academy in Canaan, just 20 miles northwest of Potter’s home.

The ceremony for the new plaque was just one part of the Andover Historical Society’s fortieth annual celebration, which included crafts sales, a flea market, music from Lindsay Schust and the Ragged Mountain Band, children’s activities, and more, including the popular railroad handcars.

The Historical Society has also preserved the site where Potter and his wife, Sally, are buried, near the old depot, which serves as the Society’s headquarters and museum.  It’s also a hub on the Northern Rail Trail, popular with cyclers.

Nearby, on Route 4, a State of New Hampshire historical marker notes that the village “takes its name from Richard Potter, noted magician, ventriloquist, and showman.”  Although that plaque calls him “a master of the Black Arts,” it does not note that he was a Black man.

The new plaque fills the void.

Lindsay Schust, who emceed the ceremony, recalled that when she was growing up, Potter’s race was obscured or treated as an embarrassment.  Now, she told me, “we don’t have to hide that anymore.”

“Having the Black Heritage Trail of New Hampshire marker is a major step forward for Andover,” Schust said.  “I hope that this will help make this feel like a very welcoming, open place.”

Following the speeches, music with the Timbre Drums Ensemble, a stirring rendition of “Amazing Grace” from Louise Grasmere, and a New Orleans style parade led by Tim and Jim Wildman, the crowd gathered around the site of the new plaque, mounted on a rock behind the depot.  After removing a covering, Brenda Lett read the wording aloud.

“Richard Potter, a magician, ventriloquist, and humorist in the early 1800s, was the first American performer to gain nationwide fame.  He helped make popular entertainment a major part of American life.  Born in Boston to an enslaved mother, Potter studied there and in Europe with renowned performing artists.  Early on, Potter’s wife, Sally, assisted him on stage.  He toured the United States and Canada for nearly three decades, charming audiences with his humor, ready wit, and showmanship.  Nonetheless, he encountered racism and danger.  Potter and his wife, Sally, both Black, moved to Andover in 1815, where he built a house of his own design.  The Potters are interred here at Potter Place.”

Lett, a Black Heritage Trail volunteer who lives in Manchester, told me afterward that she sees Potter as someone who “appeared to bring out the good in everyone.”

He must have had some bad days due to racism, she said, but “it feels like the majority of his life was lived as a human being, and urging other people to treat him that way, which lifts up their own humanities.”

Also at the ceremony was Jerrianne Boggis, the NH Black Heritage Trail’s Executive Director.  Based in Portsmouth, where the largest concentration of Black people lived in New Hampshire’s early days, the Trail has of late been expanding its presence in other parts of the state.  Boggis said they erected plaques last year in Hancock and Warner.  Already this year, they placed one in Windham and one in Kittery, Maine, and have plans for additional markers in Exeter, Dover, Jaffrey, and Milford.

Boggis says it’s important to tell the full story about New Hampshire’s Black history.  “We wanted to make sure that all these stories were revived, reintroduced to communities that had long forgotten,” she told me after the dedication ceremony.  There are stories of racism and stereotyping, she said, but also stories of inclusion.  “The more we tell these stories, the more we bring them to life, the better we can build those bridges, bridges of understanding, and create, hopefully, a more just society.”

“It’s a big goal,” she said, but it’s one they are reaching for one plaque at a time.