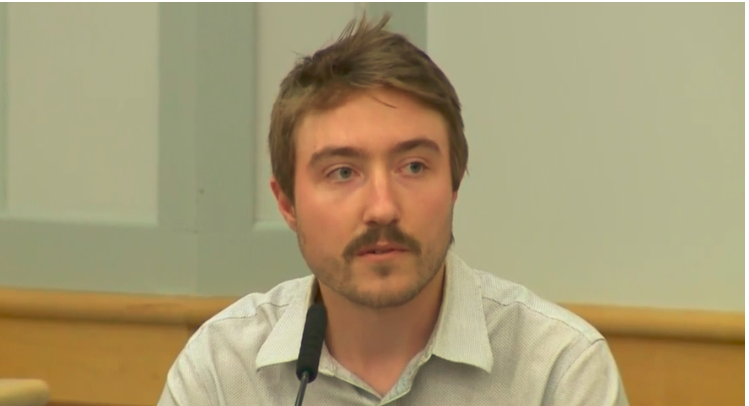 Adam Bartley is pictured on the witness stand Thursday in Coos County Superior Court in the trial of Volodymyr Zhukovskyy.

LANCASTER –  The first defense witness Thursday, Adam Bartley of Jefferson, testified he didn’t see any weaving or swerving when driving behind Volodymyr Zhukovskyy’s truck and trailer June 21, 2019, the day he is accused of killing seven motorcyclists on Route 2 in Randolph.

The defense was supposed to start calling witnesses Thursday morning, but the trial was delayed several hours with lawyers from both sides meeting in chambers with the judge.

Bartley did not take the stand until close to 2:30 p.m. Thursday. Bartley was driving on Route 2 in Gorham the day of the crash and testified he drove behind Zhukovskyy’s truck and trailer.

Lawyers for Zhukovskyy scored a major win when the prosecution ended its case this week, with Coos County Superior Court Judge Peter Bornstein agreeing to dismiss eight of the 23 charges in the 2019 fatal accident that killed seven motorcyclists three years ago. The order can be seen here:  https://www.courts.nh.gov/sites/g/files/ehbemt471/files/documents/2022-08/080322zhukovskyy-order-to-dismiss.pdf

The defense has maintained that while Zhukovskyy took heroin, fentanyl and cocaine on the morning of the crash, he was not intoxicated by the time of the crash, more than 10 hours after he used the drugs.

The 15 remaining charges against Zhukovskyy include several counts of manslaughter and negligent homicide.
Seven members of the Jarheads Motorcycle Club died during the crash; Al “Woody” Mazza, 59, of Lee, Michael Ferazzi, 62, of Contoocook, Desma Oakes, 42, of Concord, Aaron Perry, 45, of Farmington, Daniel Pereira, 58, of Riverside, Rhode Island, Jo-Ann and Edward Corr, both 58 of Lakeville, Mass.

The trial is expected to go into next week before it goes to the jury, with the defense planning to introduce an independent traffic report that shifts the blame for the wreck off Zhukovskyy.

According to defense attorney Steve Mirkin, Mazza, the lead rider for the Jarhead group, was intoxicated at the time of the crash. Medical records revealed that Mazza had a .135 blood alcohol percentage after the crash.

A National Transportation Safety Board investigation found that several of the Jarheads were intoxicated at the time of the crash, but that federal agency blamed Zhukovskyy for the fatalities.

Zhukovskyy has a history of drug use and a dangerous driving record. Weeks before the accident, Zhukovskyy overdosed on heroin while fishing with his nephews, and had to be revived with NARCAN.

Zhukovskyy was also stopped in Connecticut in May of 2019 for operating under the influence. When he refused a blood test, he should have had his license suspended. The Massachusetts Registry of Motor Vehicles’ failure to suspend Zhukovskyy’s license led to the resignation of the agency’s head, Erin Deveney.

Zhukovskyy worked for Massachusetts trucking company Westfield Transport. The company ended up paying out $1 million to the families of the crash victims before it went out of business.