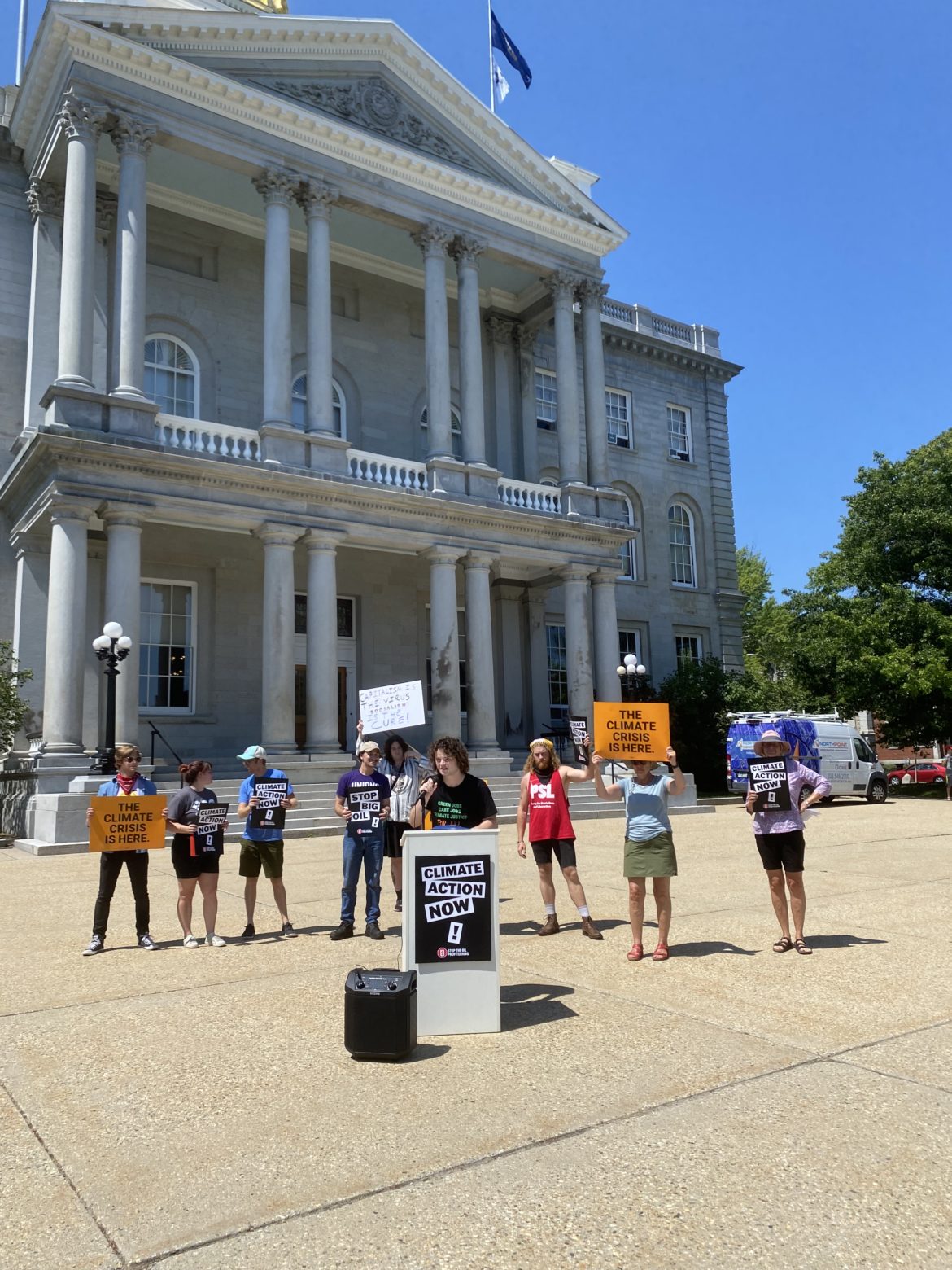 CONCORD – Climate activists took to the State House lawn in nearly 100-degree heat Thursday to call on voters to hold their future governor and legislators accountable and engage them to reject the big political money of fossil fuel companies and utilities.

While electric bills for most in New Hampshire are going up dramatically as of Aug. 1 due to natural gas prices soaring, the problem is partly political, 350 NH Action activists said in the news conference.

Republican Gov. Chris Sununu, who is running for re-election, was criticized for vetoing many renewable energy legislative bills and for receiving political funding from Eversource, the state’s largest for-profit utility.

“To inaccurately claim that Governor Sununu has not acted to reduce the impacts of climate change is simply not supported by the facts. The data is clear: From 2005 to 2018, New Hampshire’s Co2 emissions declined 34% — nearly three times more than the national average.

“The Governor is committed to vetoing costly legislation that would raise costs for Granite Staters and is clear in his support for responsible legislation that lowers costs while delivering environmental benefits.  As Governor, Chris Sununu has banned offshore gas and oil drilling along NH’s coastline, championed the state’s planning for offshore wind development in the Gulf of Maine, signed a number of bills to ensure that low and moderate-income families can benefit from the value of solar energy, signed legislation raising net metering caps for cities and towns to develop larger renewable energy projects, signed legislation empowering communities to choose the energy supply that works to achieve their environmental and economic goals.”

Sununu is offering $100 off electricity bills to everyone from federal COVID-19 ARPA funds, not enough to help the poor and most vulnerable, speakers said.

Sununu has said that this is more like $500 when all the low-income assistance programs are tapped and said he supports an incremental and market-based approach to move toward more renewables.

He has supported offshore wind for New Hampshire but he has not supported measures that would cost consumers more to invest in renewables, critics note.

Members of 350 NH Action, which sponsored the rally and offered it virtually on its Facebook page, and their supporters, noted there is some good news in New Hampshire with the new Community Power projects initiatives.

This will allow communities to have more local control on what and where they get their local power, which was recently approved by the Public Utilities Commission.

But they said the state is way behind its neighbors in New England in developing solar and only has 1 percent of its power coming from solar. Other states have offered incentive grants, but not New Hampshire.
Legislators, they claim are also being lobbied and funded by fossil fuel companies, slowing efforts.

Particularly taking the heat was the man inside the building in the corner office behind them: Sununu.

Tess George from Nashua, a former New Hampshire business owner, noted inflation has gone up 10 percent and 16 percent “and we feel these increases. Now get ready because your energy prices are going up,” she said. “A lot of times it is not clear what the cause was. Sometimes it is due to complex economic forces which led to the price increase… but in this energy increase, this is a very clear cause and we can thank Gov. Sununu and the Public Utilities Commission.”

Sununu argues that the PUC had no choice in approving these increases and that these are simply pass-through costs where the utility is not making a profit.

But George noted that Liberty Utilities had record profits this past year.

“It’s hard to understand how they justified that,” she said of the PUC. “But they did.”
“Now as we know, Gov. Sununu takes large donations from fossil fuel companies and although our elected legislators have listened to us time and time again and have crafted legislation that is forward thinking and good for our economy and good for our environment when they have listened to the will of the people, Gov. Sununu has vetoed every single one of those bills, defying the will of the people. Why? Because he has friends in the fossil fuel industries.”

Also speaking to “profiteering that is driving up utility and gas prices for New Hampshire residents,” according to its press release, were Dominic Osmundm, a 350NH Electoral Fellow; Katie Lessard – 350NH Intern from Bow; Stephanie Marshall and Dr. Bob Feder, a 350NH board member; Joy Douglass, a member of the Party for Socialism & Liberation; Concord City Councilor Stacey Brown; Seamus Burke, a 350NH Intern from Nottingham; and Jamie Henn, director of Fossil Free Media.

Dr. Feder said the climate impacts on health are substantial in New Hampshire and range from more ticks to emphysema and that both the legislature and Sununu have let the state down in favor of for-profit fossil fuel companies.

Brown said the city of Concord is finding ways locally to make a difference and she feels responsible for all 44,000 residents of the city. She noted climate change disproportionately impacts “those who have the least” on a hot summer day like Thursday.

“I just want to remind you of your power,” she said to the gathered group, many of whom were young.

She urged them to take to the polls this fall, organize and get new state legislators and leaders who reflect their values for change. Marshall noted that some on Facebook have been calling this the likely “coolest summer of their future lives.”

She urged those who live in communities without a community power plan to go to their select boards and ask to participate and for citizens to engage with their elected leaders on climate.
“New Hampshire citizens have a responsibility to act,” Marshall said.