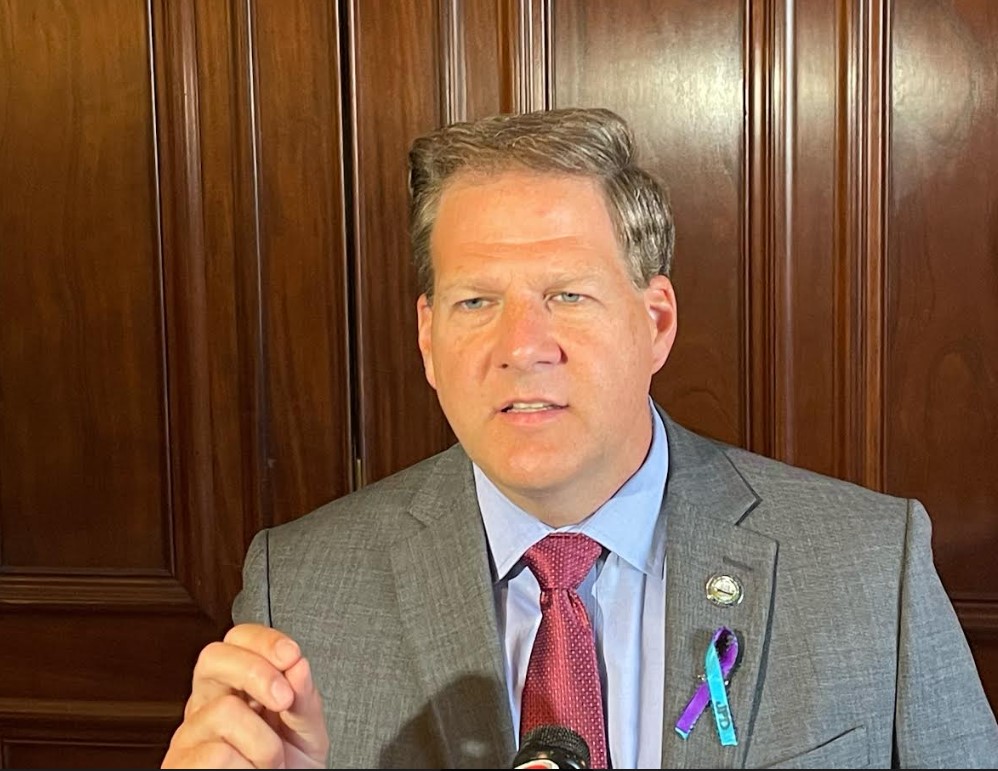 Gov. Chris Sununu is pictured Wednesday at a news conference.

CONCORD – Gov. Chris Sununu said Belknap County Delegation members who did not show up for a meeting to deal with the crisis at the county-owned Gunstock Mountain recreation area Monday night have “made it easy” for county residents to vote them out of office in the coming elections.

At a press briefing at the State House Wednesday, Sununu thanked the hundreds of county residents who attended the emergency meeting to deal with the crisis of Gunstock leadership, which some residents blame on Free Staters and libertarians who call themselves Republicans.

Sununu was referring to Delegation Chairman Rep. Michael Sylvia, R-Belmont, a Free Stater who was the lead sponsor of a failed constitutional amendment for New Hampshire to secede from the United States.

“This constitutional amendment concurrent resolution declares the state’s independence from the United States and moves New Hampshire forward as a sovereign nation,” the amendment stated. Another Belknap County Rep. Raymond Howard co-sponsored it along with others from Rockingham, Strafford and Cheshire counties. Howard has since moved and is no longer a member of the 18 all-Republican Belknap County Delegation.

In the end, Sununu said it was the citizens who resolved the matter at Gunstock, but the issues raised are not entirely over.

Not present for the meeting were Delegation Chairman Sylvia, and fellow state Representatives Glen Aldrich of Gilford, Norm Silber of Gilford, Dawn Johnson of Laconia, Paul Terry of Alton, Peter Varney of Alton, and Barbara Comtois of Center Barnstead. All are running for re-election, according to the Secretary of State.

Sylvia didn’t immediately respond to a request for comment, but after Sununu called him and two other Republican House members “crazy” last week, Sylvia spoke out about a $500 check the Gunstock Area Commission sent in 2020 to Sununu’s campaign calling it inappropriate and possibly illegal. A Union Leader reporter tweeted that another check for $1,000 was sent from the commission to Sununu’s 2022 campaign.

At the news conference Wednesday, Sununu said: “They sent a campaign contribution. There is nothing wrong with that. If they want it back they can ask for it back just like anybody…I do not know the direct laws on their end,” in giving the contributions.

The 18-member county delegation is made up of all the House members in Belknap County and they have appointment authority over the Gunstock Area Commission.

Sununu said of those who didn’t attend the Monday meeting: “They are making it very easy for the citizens of Belknap County to move on from them, hopefully, but that is going to be a decision for Belknap County.”

The Republican governor had a message as well for the heavily Republican Belknap County, one of thanks for their political activism to allow Gunstock to reopen and prepare for another ski season which benefits not only tourism but residents of the county and schools.

“I probably threw a little more gasoline on that fire when I made sure that everyone knew what was happening there because it’s not just about Gunstock, it’s about the whole state. It’s about Belknap County. It’s about all these citizens, all these schools that rely on Gunstock for their school (sports) programs. That’s a state interest and so that is why I got very aggressive about it and said, look you’ve got to get rid of the individuals who caused that problem, let that management team come back in but the citizens and the county had to take action. And they did and I just want to thank them for that,” Sununu said.

A Political Action Committee, Citizens for Belknap, has also urged voters to replace all legislators who did not attend the meeting. The group is compiling a voting guide to inform the county about what they see as Free Staters and anti-government extremists taking over.

Sylvia has said the meeting was illegal, that only he could call for a meeting as a chair, or that seven days are required for an emergency vote, but County Attorney Andrew Livernois wrote in his interpretation of the law that the meeting was legal.

The Monday meeting was called more than 24 hours in advance to oust Dr. David Strang of Gilmanton from the Gunstock Area Commission. This was a provision required by Gunstock’s seven top staffers who quit on July 20, saying they would not return to work with Strang and its chair, Peter Ness, on the commission. Ness resigned last Friday at the urging of fellow commissioners Doug Lambert and Jade Wood. And Commissioner Gary Kiedaisch resigned July 20 with Gunstock’s senior managers.

The 10 members of the delegation who attended Monday’s meeting accepted Strang’s resignation after they chose Denise Conroy of Alton to serve out Strang’s term on the five-member commission, which ends in November.

The mountain’s recreational assets were all closed for lack of staff for about two weeks after the July 20 resignations and will reopen to the public Thursday, Aug. 4, the first day of SoulFest. The Mountain Coaster, Zipline Tour, and Aerial Treetop Adventure will be open, but guests must have a SoulFest wristband to ride the chairlift from Thursday to Saturday.

This also allows for the contracted three-day Christian music festival SoulFest 2022 to be held for its final year, drawing an estimated 6,000.

Day said he and his staff were anxious to return to work and that they needed to be in place for contractual and insurance reasons.