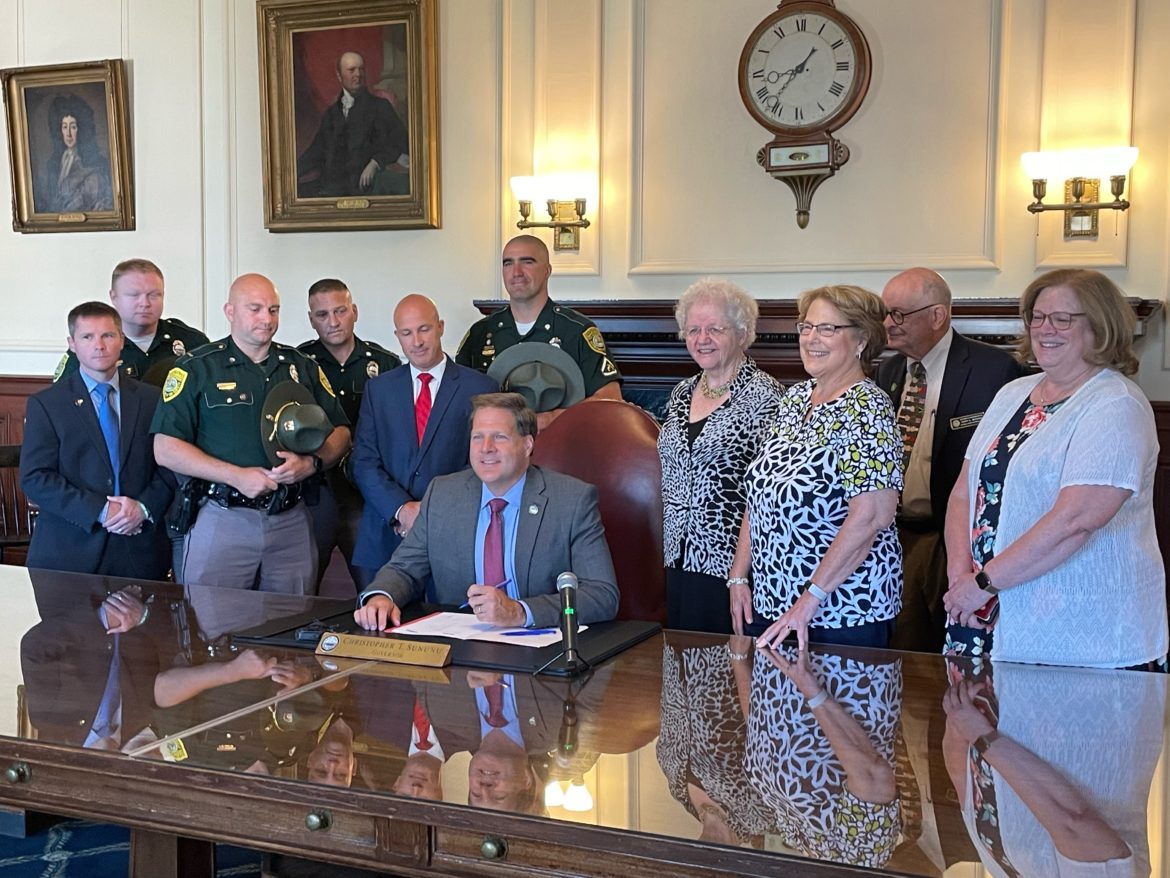 Gov. Chris Sununu signs bill naming a bridge in Portsmouth in honor of Staff Sergeant Jesse E. Sherrill, who died in the line of duty last fall on Interstate 95, on Wednesday.

The governor answered reporters’ questions during a number of bill signings at the State House and around Concord on Wednesday. One was the Jason Dickey Suicide Prevention Act or Senate Bill 234 and another was naming a bridge in Portsmouth in honor of State Police Staff Sergeant Jesse E. Sherrill, who died in the line of duty last year on Interstate 95.

Sununu addressed a Tuesday article in Politico https://www.politico.com/newsletters/west-wing-playbook/2022/08/02/first-stop-delaware-00049199
indicating inside sources said Biden recommended the Democratic National Committee hold off announcing until after the November election the sequencing order for 2024 primary states.

It might also be, the Politico article stated, because the president has “on more than one occasion quizzed people in his orbit about the possibility of Delaware going early, even first,” replacing New Hampshire.

Sununu said during a press briefing Wednesday that New Hampshire has earned the seat as first in the nation in voting for president.

From election integrity to high voter turnout, he said, the state has it all.

“To think that well, ‘any state can do it, I’ll just put it in my own state,’ it is an insult. It is an insult to all the voters of New Hampshire frankly that the Democratic party thinks it is so easy to do this that it can go anywhere,” Sununu said.

The Politico article indicated there are at least 17 states that have indicated an interest in hosting the first-in-the-nation primary and that Delaware put together a video explaining they have a diversity of voters and that they are small and within easy distance of Washington.

New Hampshire has hosted the first-in-the-nation primary since 1920. Sununu agreed with the article that the decision to hold off on naming a state to host the coveted political first is likely due to the fact that the DNC does not want to impact the political fortunes of its candidates in the mid-term elections this November in some states where their candidates may be vulnerable.

This might include U.S. Sen. Maggie Hassan, D-NH, who is running for re-election, and U.S. Congressman Chris Pappas, D-NH.

As president and a Democrat, Biden is essentially the leader of the DNC but the article said insiders claim he said he has been too busy trying to get his own agenda priorities to pass in Congress to be focused on the 2024 primary.

Sununu said all schools that have student IDs are being sent a letter this week reminding them that the new law takes effect now so that they can have the number on the back when students return this fall.
The number is 1-800-273-TALK (8255) or text 741741 or the national number which is now being stood up 9-8-8.

“It’s something that sounds quite simple but can have huge impacts and can save lives from suicide,” Sununu said in signing the bill with the parents of Jason Dickey, Martha, and Paul Dickey of Boscawen in attendance.

Jason Dickey took his own life in September 2017 and if alive he would now be 24 years old.
“Hopefully,” she said, “this saves other kids.”
Sununu called youth suicide “a national crisis,” exacerbated, in part by isolation caused by the COVID-19 crisis which closed many schools and forced remote learning.

“Whether you are in downtown Manchester or in a rural area, you never know when a mental health crisis is going to hit,” the governor said.

Sununu was asked by reporters about the state’s mental health crisis. He said it is fortunate that there is federal money to help make investments now, including the purchase of a hospital in Hampstead which is being dedicated to helping New Hampshire youths who facing a mental health crisis. The state also has a new mobile service to help those in crisis and is working to stand up mental health care beds in communities.

Other bills signed included House Bill 1038, naming a bridge in Londonderry in honor of Robert J. Prowse and a bridge in Portsmouth in honor of Staff Sergeant Jesse E. Sherrill, who died in the line of duty last fall on Interstate 95.

Attending the ceremony were members of New Hampshire State Police, including Lt. Keith Walker of Troop A, where Sherrill served.

“Jesse was a great person,” Walker said after the ceremony and Sununu said he got to know Sherrill when he came to his house to help manage protesters who came during the pandemic to protest mask mandates.

Members of the Prowse family were also in attendance including Sue Callahan of Contoocook, his granddaughter, and Joyce Prowse of Bow, his daughter-in-law.

They noted Robert Prowse was the engineer for over 400 of the state’s bridges.

Also, ceremonies were held Wednesday for the signing of Senate Bill 390, relative to telemedicine and telehealth, and Senate Bill 360, relative to National Guard educational benefits.
Another issue Sununu addressed during his briefing was the popularity of the $100 million grant opportunities being offered to develop low to moderate-income housing in the state.

It is still open to applicants and also includes funds for the demolition of buildings in communities and money to help revamp existing zoning laws in communities.

Sununu said the applications will be graded and he expects all the money will be spent and that it will be distributed based on need statewide.
He also said officials at Seabrook are continuing their inquiry into a false alarm last month and that work continues to find ways to help citizens pay expected high electric and heating bills this winter.